Why are Chinese punctuation marks 。and 、so similar to its western style equivalents?

I've been trying to understand what are the rules for using Chinese punctuation symbols and I stumbled upon this article, which states that:

For instance, a Song Dynasty print of Chronicles of Huayang used full-width spaces to denote a stop,[4] whereas a print of Jingdian Shiwen from the same dynasty simply used "。" and "、" marks.

"Jingdian Shiwen" is a 6th century dictionary (according to this wiki article).

Here is my question. How come that 。and 、 are so similar to their western counterparts?

Is this a mere coincidence (as far I know Chinese could not have studied any latin based scripts at the time) or maybe there is an underlying logic for using very similar symbols for expressing the idea of full stop.

I wasn't sure on which area I should post this question. Hopefully, the answer will be more related to linguistics/history of linguistics, than to history of China.

Shapes that are too simple are always going to resemble each other. A small dot-like mark used for marking pauses in prose

Chinese punctuation for marking pauses in prose for rhythmic purposes have existed since Warring States period (5th–3rd century BCE). Taken from an answer on Chinese StackExchange: 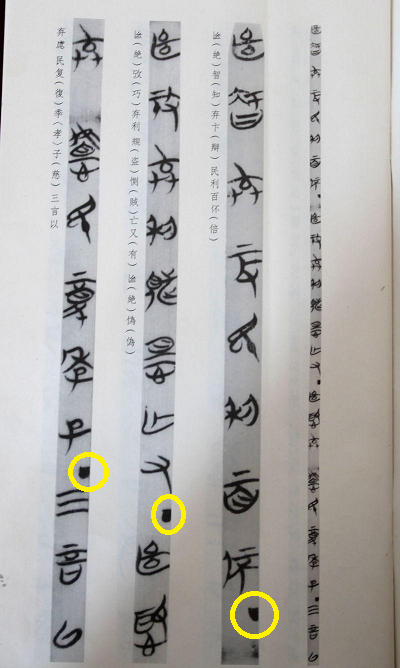 Tao Te Ching manuscript from the Guodian Chu Bamboo Slips, written in the Warring States era State of Chu. The text is given in verses, beginning with an 8-character rhythm, and the punctuation marks are found on the bottom right of the terminal character for the verse, as a verse breaker.

Places where pauses are to be inserted have been called judou (「句讀」, lit. stop 句 and pause 讀) since the Han Dynasty:

He Xiu of Han, in his work Contemporary interpretations of the Gongyang Zhuan, notes in the preface that

When quoting another text, do not include its punctuation.

I seriously doubt that the claims in the Wikipedia article are true: They don't cite scholarly papers but some strange Baidu site whose reliability I cannot assess at all. It seems very unlikely that such kind of anachronism really happened, one matching punctuation sign would be a big surprise already, but two of them with the same semantics sound like a hoax to me.

Not the answer you're looking for? Browse other questions tagged chinese punctuation or ask your own question.

10
Why do languages with such different alphabets use the same common punctuation marks?