How to interpret the dependency parse tree of an English Slot Grammar? 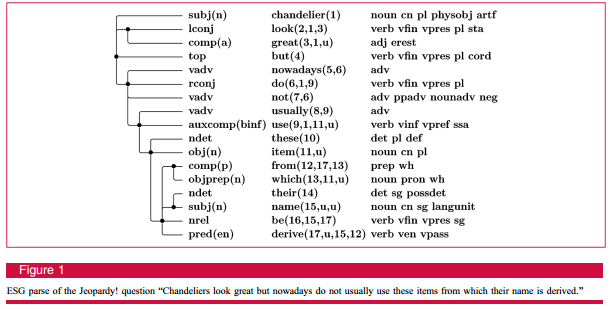 This is the paragraph that describes the tree in the figure above:

An SG parse tree is a dependency tree: Each tree node N is centered on a headword, which is surrounded by its left and right modifiers, which are, in turn, tree nodes. Each modifier M of N fills a slot in N. The slot shows the grammatical role of M in N. In our example, the node with headword "chandelier" fills the subj (i.e., subject) slot for the coordinated VP (verb phrase) node with headword "but". This modifier tree structure is the surface structure of the parse analysis. In our sample parse display, you can see, on the left side, the surface structure tree lines - each line connecting a node M to its mother node N and showing the slot filled by M in N.

I am not able to interpret the tree even after reading that paragraph many times (English isn't my first language). The questions I have are:

I'm used to seeing the output of a dependency parser in this form:

This figure is from the paper titled "Using Slot Grammar"(IBM Research Report, RC23978REVISED(W1003-081) March 24, 2010). I find the arrows really helpful in interpreting the result.

Your second question is the answer to your first question: The dots indicate the head node of the respecitive phrase.
For example,

In case a sub-tree consists of a single node only, heads are not marked by a dot as there is only one node that could be the head anyway - as in the subject NP chandeliers, where chandeliers is the only node and at the same time the head node of the NP chandeliers. If it had any dependents, e.g. a determiner, it would look like just like the structure around name.

If you want, you can just rotate the tree 90° and add arrow tips:

This graph tells you the exact same thing as the output in the Watson format. It just looks a bit differently - this is really no more a matter of style.

Your question is thus not actually one about English slot grammar in particular: It is about the graphical representation of dependency trees - where the Watson parser referred to in the paper happened to use some less common format for displaying the output, which is, however, independent of the type of dependency grammar (e.g., slot grammar) or language (e.g, English). A universal Stanford dependency parse could be displayed in the way your Watson SG screenshot does, and a slot grammar analysis tree could be displayed in the way you are used to from the literature (like in the graph I provided above); the difference lies only in whether to show the graph horizontally or vertically, or whether to choose dots or arrow tips for the edges and apparently a vertical tree with dots happens to be more useful for the three column display so they chose that format to display the same thing.

As a side note, you should be a bit careful about wording: head ≠ mother. The paragraph talks about heads and modifiers, which is a notion that involves some semantic/linguistic information, while "mother" is a purely syntactic (graph-theoretic) concept that is about which node is immediately dominant to some other node.
but is not the mother of chandeliers - it is the head of the phrase that is the mother of the node consisting of chandeliers. The mother node would be the complex node consisting of the entire sentnce; or in the NP their name, the mother node of both their and name would be the complex node consisting of exactly these two nodes.
But since dependency trees, as opposed to constituent trees, are not direclty interested in constituent hierarchies and relations such as immediate dominance or sisterhood, that the complex consituent is the mother node is not directly of interest here - what is more important is that but is the head of the phrase that chandeliers belongs to.

Not the answer you're looking for? Browse other questions tagged computational-linguistics parsing dependency-grammar or ask your own question.