I'm working on project regarding German dependency parsing, and came across something I'm a bit unsure about.

Using a parser, when given an input (whether it be in a sentence or just the verbs) which contains "sich ___ lassen" (for example "sich beeindrucken lassen") I would have assumed that since "sich beeindrucken" doesn't really exist on its own, that the dependency relation should be 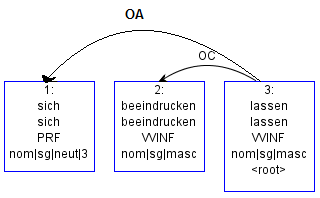 but instead the parser interprets it as

Which one is the correct one?

Thanks for your question. This example reflects a larger problem in grammaticizing language. Roughly speaking there are two approaches: Generative and descriptive. A parser is generative, presupposing that there are elementary and globally correct grammar rules whom all sentences in a language ideally abide by. Exceptions are accepted but are treated as “quirks” of the language without any further hidden rules.
To oversimplify the matter, lets suppose the parser categorizes words of a sentence as SUBJ, OBJ, VERB, etc. The parser would analyse the sentence I told him a story. in the same way as I told the story a water. as SUBJ + VERB + S.OBL + OBJ. The verb tell requires slots {SUBJ, OBJ, S.OBL*} to be filled.
(*indirect object = oblique, subsequent to direct object in the causal chain, “allative”)
Yet I told him the story. makes perfect sense while I told the story a water. is nonsensical. This is to demonstrate that there are more fine-grained requirements and classifications, e.g. animacy, mass vs. count noun, etc. that have to be considered in speaking a language.
Croft shows in the final chapter of his book Verbs that on this level grammar gets messy. He postulates a usage-based model where instead of global and pervasive grammar rules and classes such as “A SENTENCE CONSISTS OF AT LEAST A PREDICATE AND A SUBJECT.” and SUBJ, NOUN, etc. there are local rules for a small set of local words, e.g. verbs that have “idiosyncrasies”, or special requirements which are related not to the general grammar of the language but arise from certain semantic considerations and conventions. I think lassen is a very good example to demonstrate what this usage-based model tries to describe:

lassen is a verb that, by subjectification, has acquired a causative sense. The argument structure of lassen can be schematized in two ways (according to Talmy’s Force Dynamics):

The causer causes an event that is expressed by a clause which is subordinated by reducing its subject to an object and its predicate to a non-finite form in a process called reduced marking which was discussed in another question [How do languages with case deal with 'sentential arguments'?).
E. g.:
Der Fremde floh. (caused event) + Der Wächter (causer) > Der Wächter ließ…
SUBJ FINITE
…den Fremden fliehen.
OBJ INF

While (1) analyses sentences with lassen as multiclausal, (2) analyses them as a single clause with a ditransitive lassen. Although I believe that the truth lies somewhere inbetween, I will consider both. What both analyses have in common is that they assume that lassen constitutes a contraction of some sort: (1) can be analysed as B-raising of the causee and (2) as an equivalent noun phrase deletion (or equi) of the causee.

(1) lassen as a contraction due to B-raising of the causee
In B-raising, a clausal sentence that has a main predicate that is practically void in meaning but modifies the meaning of a subordinate verb, is contracted by raising the subject (SUBJs) out of the subordinate clause up into the main clause where it becomes an object (OBJm). Consider first A-raising, where the SUBJs becomes SUBJm: It seems that the clouds are gathering.
seem {clouds, gather}
The clouds seem to gather.
seem, clouds {gather}
The subordinate clause that remains is the subordinate predicate. It is tethered to the object, in some languages even by further nominalizing the verb to a gerund or participle that may even agree in case and gender with the raised SUBJs:
*The clouds seem gathering.
Die Wolken erscheinen sich sammelnd.
Nimbi parent coientes.

(2) lassen as a contraction due to equi of the causee
In equi the causee is originally mentioned twice, once in the main sentence and once in the subordinate clause. If coreference is redundant for intelligibility, one reference (namely the one of the subordinate clause, since it is the one that needs reduced marking) is deleted. The original expanded sentence would be: Der Wächter ließ den Fremden den Fremden fliehen. (Such as: Der Vater ließ das Kind ein Eis kaufen.)
(The transitive lassen without complement means “leave alone, let be”, from which obviously the other meaning evolved.)
Der Wächter ließ den Fremden + {Der Fremde floh.}
- OBJm = SUBJs

Further description of the verb lassen has to address the special requirements of construction that have been previously referred to as idiosyncrasies (syn. cryptotypes), i.e. such restrictions that are not deducible from the general/generative grammar a parser employs. These idiosyncrasies reflect further understanding of the scene that lassen sets up, the relations of arguments that are not depicted in simple grammatical classes such as SUBJ, OBJ:
a. lassen (as Sibutlasi has already pointed out) does not allow a passive in the subordinate clause.
b. The causer has control over the caused event. The causer has hitherto blocked the realisation of the event.
c. The causee has a tendency towards action that opposes the tendency of the causer towards stasis. (In Talmy’s terms: The causer is the antagonist with tendency towards stasis that is superior than the causee that has a tendency towards action.)
d. lassen does not specify if the OBJ is the agent or the patient of the INF.

Iconicity excuses the contraction that lassen coerces, inasmuch as that the contraction moves the causer closer to the event – profiling it as a direct agent in a seemingly uni-clausal sentence (cf. Vesterinen, Direct, Indirect and Inferred Causation: Finite and Infinitive Complements of Deixar and Fazer). Cf. following examples:
(1) Der König ließ den Hund töten.
(2) Der König ließ töten.
(3) Der König ließ zu, dass der Hund [tötete/]getötet wurde.
(4) Der König ließ zu, dass der Hund [töte/]getötet werde.
(5) Der König ließ den Hund los.
(6) Der König ließ den Hund auf den Fremden los.
(7) Der König ließ den Hund. (“The king let the dog be.”)
(8) *Der König ließ es den Hund töten.
Sentence (1) implies more that (or necessitates to be understood as) the dog was actually killed, while (3) leaves room (iconically in form of morphemes, in “word distance” between the causer and the event) for the possibility that the dog eventually did not die, and (4) almost suggests that the dog survived, i.e. the likeliness that the dog survived gradually decreases over Der König ließ zu, dass der Hund getötet werde. > …zu, dass der Hund getötet wurde. > …den Hund töten.
Similarly in (5) a third event, namely that the dog might arrive at the foreigner, is made more likely, since it is squished into the same sentence as the king unleashing the dog; ergo the dog is more likely to have run off in (6) than in (5). Likewise the dog is more likely to have killed (or have become killed) in (1) than in (7). (Cf. the cogency of a subsequent utterance such as Aber der Hund entkam., Aber der Hund verschonte den Fremden.) Every explicit link between the causer and the event could be weak and imply that the event eventually did not take place, inevitably suggesting alternative outcomes. Thus (a.) a passive is not allowed, since a passive alludes to an undefined agent: Der Hund wurde getötet. – Von wem? But the agent is already defined: It was the causer all along (Der König ließ den Hund töten.). Likewise an undefined agent, such as normally is expressed in German by a dummy agent es, is not allowed either (cf. (8)).
This iconicity readily accepts ambiguities in the subordinate clause, but this is a general tendency in reduced marking. The dog may be the agent or patient of töten, and likewise sich in sich beeindrucken lassen. Whether the OBJ is conceived of (and understood) as a patient then only is a matter of semantics. Cf. following sentences:
Ich lasse die Ziege schlachten. / Ich lasse das Reh jagen.
Ich lasse den Metzger schlachten. / Ich lasse den Jagdhund jagen.
The only cues left to define roles in the subordinate clause are the semantics of the OBJ and the INF (cf. I told him a story.). A goat is rather the victim and a butcher rather the actor when it comes to slaughter.
In total, the rule “A SENTENCE CONSISTS OF AT LEAST A SUBJECT AND A PREDICATE.” may be rephrased in force-dynamic terms as “A SENTENCE EXPRESSES A UNITARY EVENT/UNITARY TRANSMISSION OF FORCE INVESTED/EXERTED BY AN AGENT AND/OR MANIFESTING ITSELF IN A TRANSITION OF STATE IN AN OBJECT.” Contracting lassen to such a sentence expresses the direct and immediate relation of cause and effect in an otherwise indirect relation, deleting aspects of the scene that might suggest otherwise (contribution/dissipation of causing force) (e.g. lassen also does not refer to how (= by which means) the king kills the dog).

Your intuition is correct, the parser is wrong in this case. Note that the argument structure for "lassen" taking an open complement is lassen⟨_,_,P⟨...⟩⟩ where P is the secondary predicator. This means that in a sentence like "er ließ sie ermorden" the causee depends on the finite verb. Reflexivisation unifies the subject with the argument in object position which in turn plays a role in the open complement's argument structure (this is referred to as argument fusion or coreference depending on the theory of dependency grammar used). For more on how argument structures interact with dependencies I'd recommend the PhD theses of Alsina and Manning.

Not the answer you're looking for? Browse other questions tagged german parsing dependency-grammar lexical-relations or ask your own question.

3
How do languages with case deal with 'sentential arguments'?