Is a complement of a verb treated any differently than an adjunct of a verb in a tree diagram?

For example, in these two sentences, "on the floor" is an adjunct of the verb "slept" whereas "on my mother" is a complement of the verb "relied".

In mainstream phrase structure grammars that rely on some form of X-bar theory, yes: In fact, the differing tree structures are the crucial point where the difference comes into play (coming along with grammatical implications concerning lexical selection, government of morphological features etc.).
The distinction between complements and adjuncts behaves the same way for VPs as it does for NPs or other categories.

In a classical X-bar account as taught in basic linguistics classes:

An adjunct to a verb(al projection) is a sister to the V' it adjoins to and daughter to a new V' projection: 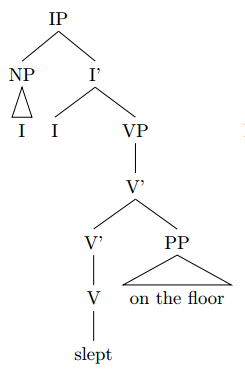 I.e., the verb already forms a higher bar projection (V' instead of just V) by itself. At the level of V', the phrase is already somewhat "complete" in terms of grammaticality; what potentially misses now is a specifier, but VPs are generally not assumed to have specifiers, so at this point, we can already obtain a full verb phrase (which is visible by the V' going over directly into a VP). The adjunct acts merely as a modifier to the V' (in the sense of adding more information) and thereby produces a new V' projection; i.o.w., adjunction doesn't really change anything about the grammatical status of the verbal projection - we had a V' previously and we have a new one now; the adjunct might as well be left away and leave a healthy verb phrase.

The complement of a verb is a sister to the verbal head, and daughter to a first V': 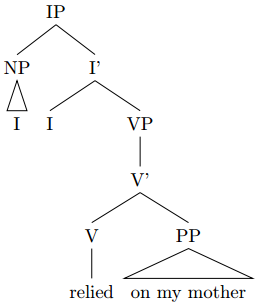 I.e., a verb that requires a complmement forms the next projection level only together with its complement; without it, the sentence is ungrammatical. V does not make a V' by itself. It requires the complement as a direct sister in order to form a higher, more "complete" projection that can stand by itself. So the next level of phrasal completeness may only be added after combining the V head with its PP argument.

Other variants of phrase structure grammar will propose slightly different tree structures, e.g. by omitting redundant bar levels (redundant because there is no specifier present) and making the V' a VP right away, and all the other usual disagreement on the specifics of tree structures, but the basic functionality is the same: Adjuncts adjoin to a node that is by itself already "complete", while complements are direct sisters to the head.

Non-classical phrase structure grammars like, as mentioned by BillJ, CGEL, or tree representations of dependency analyses, ... might handle this entirely differently.

A rule of thumb that will seldom (if ever) lead you astray is that a modifier (or "adjunct") modifies a constituent of the same category as the entire modification structure. Complements do not obey this rule.

So far as I know, no known syntactic theory describes this basic fact of language structure.

Not the answer you're looking for? Browse other questions tagged syntax-trees verb-phrase or ask your own question.

7
Why are syntax trees binary trees?
3
Is there a grammar of syntax that takes into account inherent syntactic ambiguity in natural languages?
3
How to Handle Conjunctions in Generative Syntax Tree without Abandoning Nontangling Condition
0
Why not structurally distinguish a predicative complement from an object in a tree diagram?
2
Phrasal verb? Adjunct vs complement?
3
How to analyze an NP with two determiners?
2
If there is a version of linguistics that doesn't break sentences into tree structures
3
Why treat 'verbal group', not 'verb phrase', as a constituent of a clause in Systemic Functional Grammar?