I've recently read a book written by J.C Milner, in French, entitled 'introduction a un traitement du passif' (1986), he was influenced by Generative theory and some of his basic assumptions regarding the passive correspond to Chomsky's 'syntactic structures' and 'remarks on nominalization'. However, in this book, Milner comes to the conclusion that the 'passive' is an illusion and/or its paradigm doesn't exist. I still don't see what his conclusion is aiming at. Why considering passive illusory? 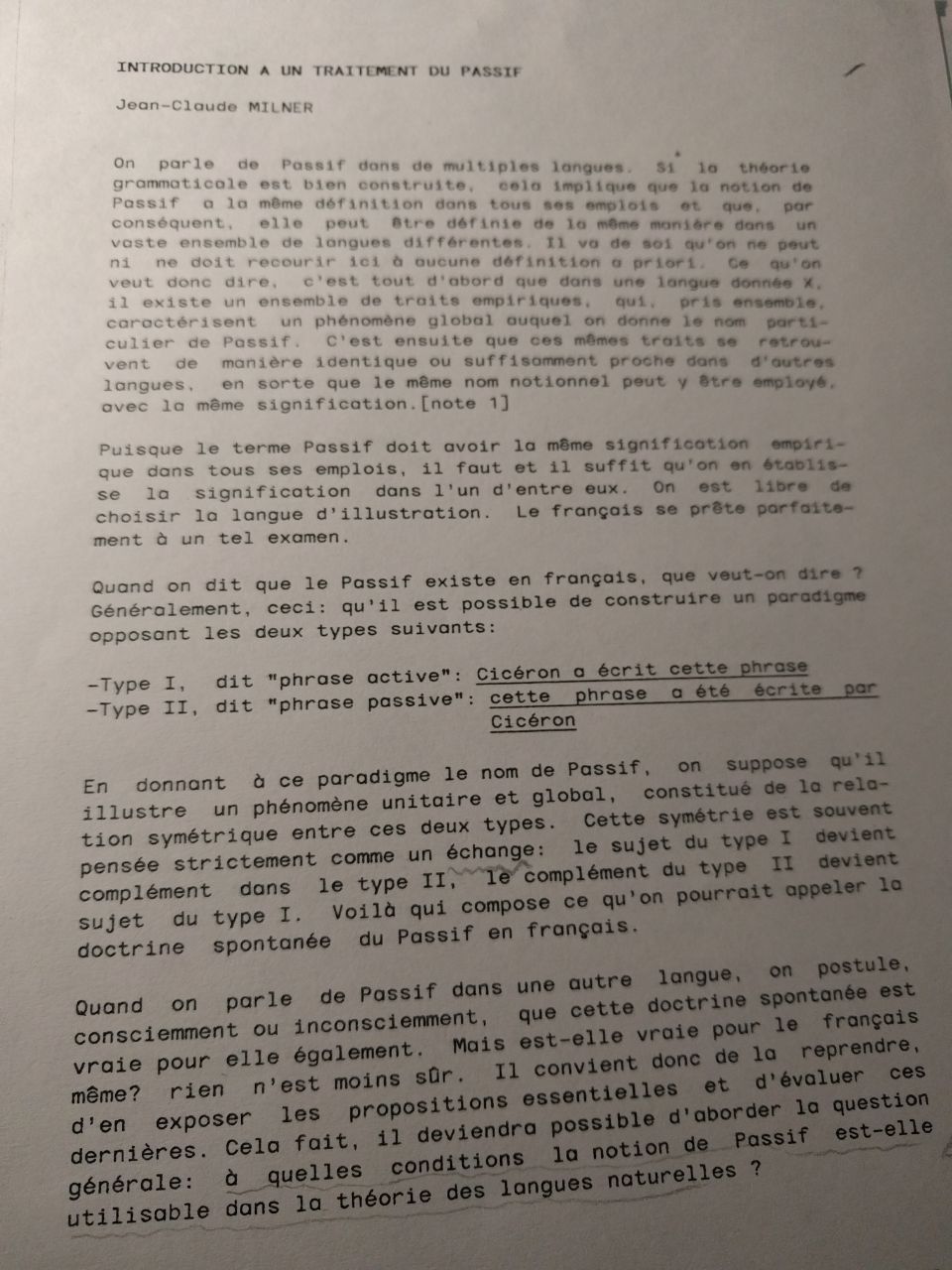 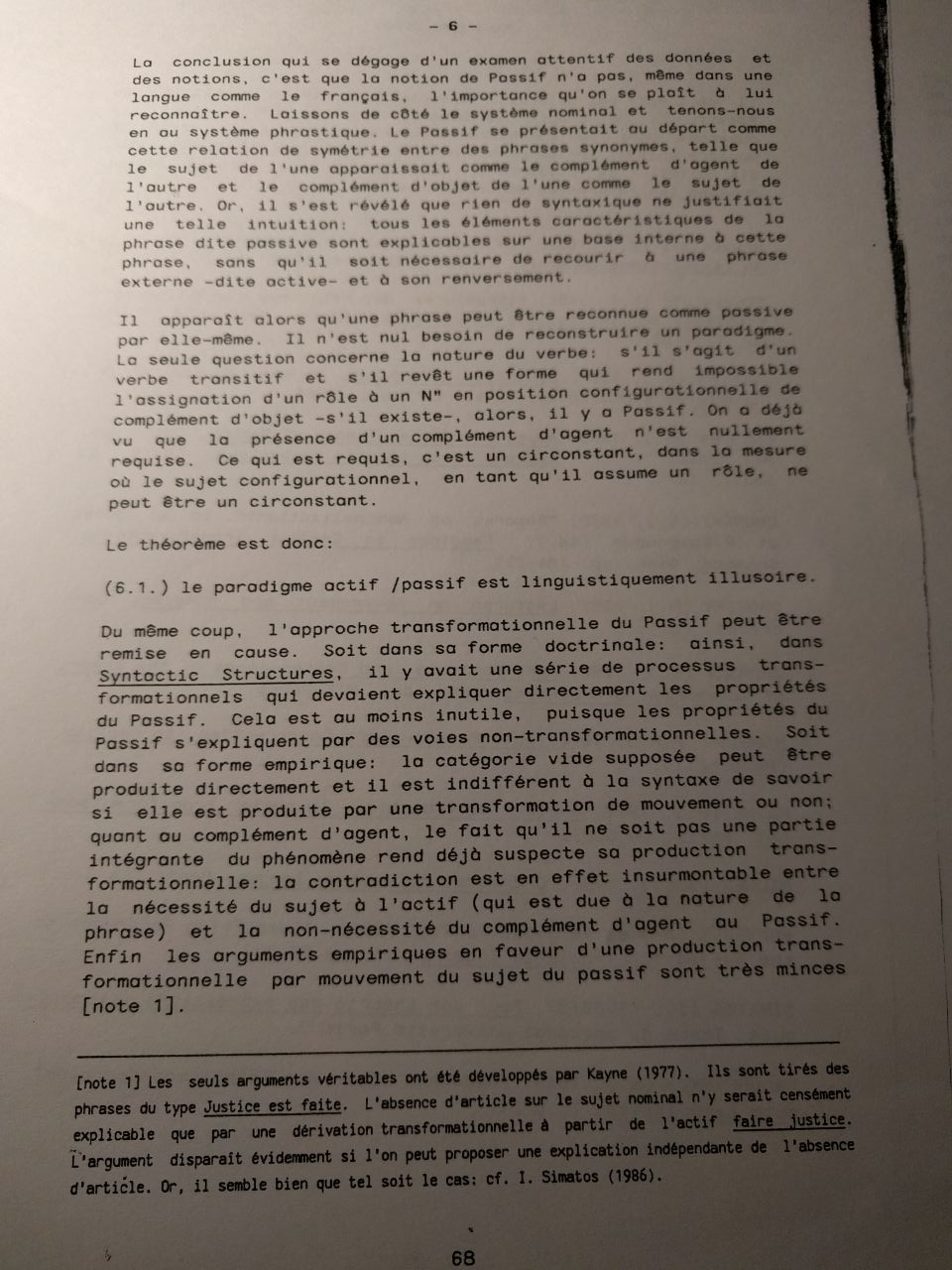 I think he is using 'passive' to mean 'the passive transformation', probably because this was the most common meaning of 'passive' at the time. He's arguing that we can generate and interpret passive sentences directly without using transformations, and that the difference between passive and active is that in the passive, the verb cannot take an object. I suspect he would not disagree that the word 'passive' is still useful for talking about the sentence structure; it's just that he does not agree with treating it as a transformation from the active.

A passive serves the function of promoting a direct object to subject.

In English, the main focus is on the agent most of the time (an agent is the person/thing that does something in a sentence). This helps in what is called 'pivotting', where two sentences are assumed to have the same subject.

We don't need to restate the subject in the second clause, thanks to pivotting. However, what if the agent of the first sentence is the direct object of the next sentence (or vice-versa)? A passive allows this to happen.

i.e: The cat run up a tree because it was being chased.

As the second example demonstrates, using a passive also allows you to drop the agent. This can also be used to improvise an anti-causative, which is a construction where something happens to something with no apparent cause.

Then you ask them: Who ran away?

If they answer 'Bob', then the language is nominative. But if they speak an ergative language, they will assume its bill, because that's how their language works. Sentences pivot around the direct object rather than the agent most of the time. If they wanted to specify that Bob was the one who ran away, they would have to use an anti-passive construction in the second clause. English being a nominative language, we don't need to do such. However, we have the reverse problem in that if the direct object of the first sentence is the agent/subject of the next sentence, then we have to use a passive construction in the first sentence. Neither really has an advantage over the other, in fact languages are almost as likely to be ergative as nominative. It should be noted though that there's other alignments besides these two. And one language family uses an alignment system unique to that family (its called Austronesian alignment, named after the language family of course).

Of course some languages just don't bother with either a passive or anti-passive. For example, Basque, which is an ergative language, doesn't have an anti-passive, or pivotting in general. Speakers claim that their language doesn't really have a concept of a subject. They do have agents and direct objects, but they don't ever emphasize one over the other.

And it should be noted that generative linguistics is an out-dated theory that mostly only fans of Chomsky really pay attention to. If you want to see why, read up on L1 acquisition (the study of how kids pick up their first language). It pretty clearly disproves generative linguistics. Children for example don't realize that they can transform statements into questions or vice-versa. In fact, they tend to learn to ask questions first before statements. Which makes sense. They don't know enough at first to give an answer to anything, they're still learning about the world. So of course questions come before statements.

Not the answer you're looking for? Browse other questions tagged passive grammatical-voice or ask your own question.

8
What is a middle voice and a medio-passive voice?
5
infinitive passive in Esperanto
5
What is the subject of a passive sentence?
3
Is there a language which uses 'passive voice' more often than 'active' one?
1
Derivation of Passive according to Principles and Parameters (Jaeggli)