To what extent does this image accurately express the modularity of linguistic units?

This is a popular image floating around the internet, but like many things floating there, it seems like a gross simplification and just plain inaccurate.

However, I’m more of an armchair linguist than a bonafide linguist like most of you guys.

To what extent is this accurate, would you use it as a heuristic for undergrads?

For ex.: It seems strange to distinguish between “literal meaning” (do linguists even believe in literal meaning?!) as an object of study itself?

Etc etc. but maybe this is still a useful tool to understanding units and subdisciplines in the field. What’s your take? 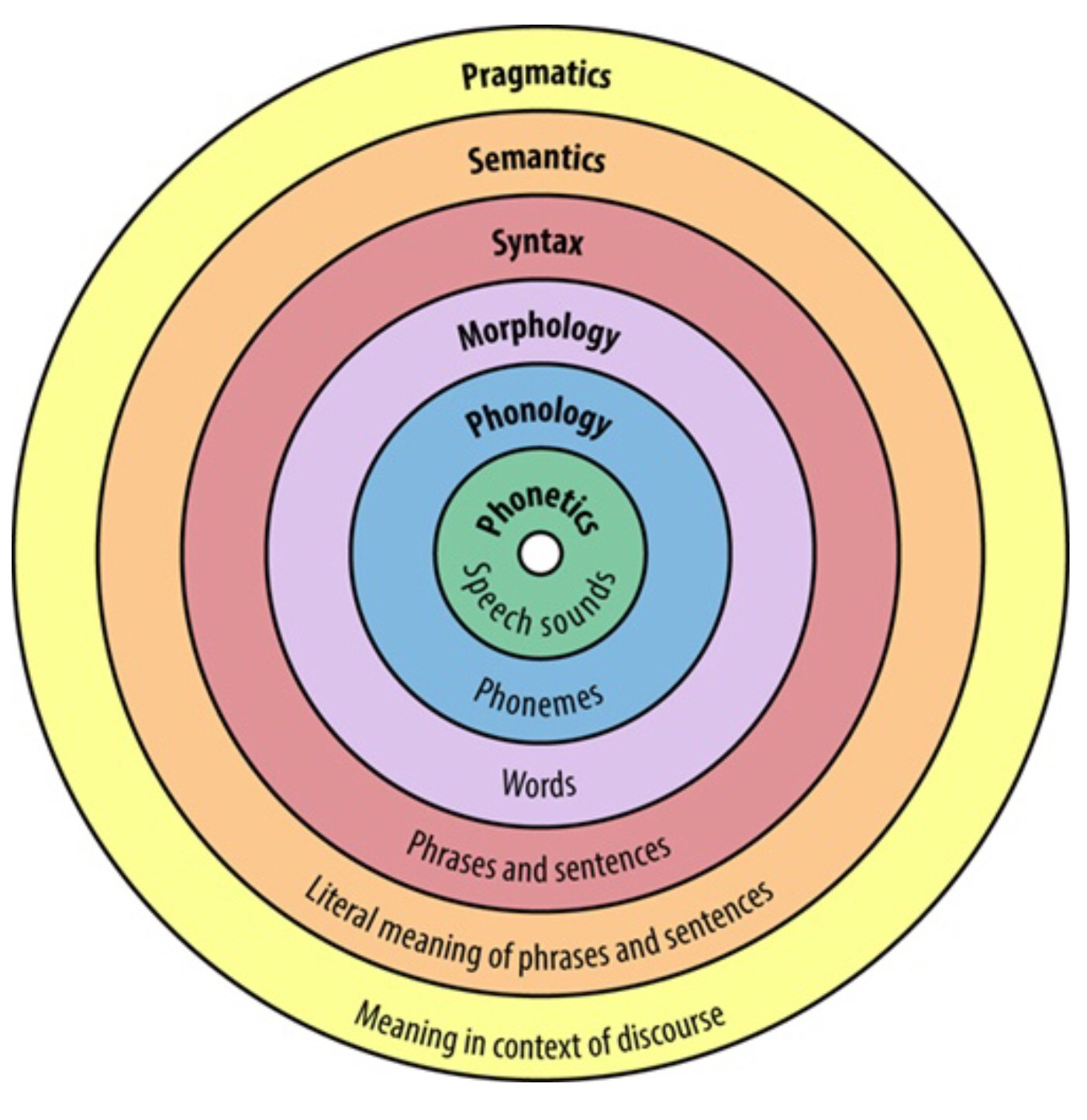 I find it more accurate to see the world as follows: 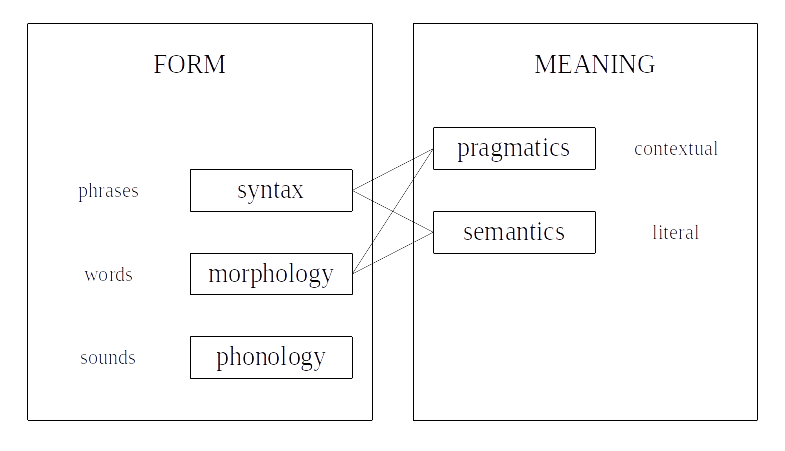 IMO it's not very accuate to depict semantics as an extension of syntax. There is a crucial difference in what phonology, morphology and syntax do and what semantics and pragmatics are concerned with: The former are about form, the latter about meaning. This is a distinction that is sometimes disputed, but nevertheless still quite apparent in the way the different fields are investigated. There is a fine line between the study of the internal structure of words and that of phrases, which is why I tried to make the transition between morphology and syntax a bit blurry - some linguists might say that morphology is just word-syntax - and the way from phonemes to the items that are composed of them is quite plausible to depict as an "on top of" relation, but the step from syntax to semantics is rather different. It's not just shifting the zoom level of the elements whose structure is being investigated, but it's a whole different question that is tackeld by semantics an pragmatics: It doesn't ask about how linguistic elements are shaped and inherently structured, but how to interpret them. I therefore found it more accurate to display these areas as two rather parallel fields of study that interact which each other (this is what the lines between left and right are supposed to mean).
On top of that, I find it not very useful to display semantics as the thing that comes after syntax. Semantics starts at the level of words and extends over phrases up to sentences, and should therefore touch the structural level of words. Pragmatics can only meaningfully done at the level of larger phrases and sentences, and extends beyond the sentence boundary to the level of discourses. I tried to make the vertical alignment accordingly. Again, the boundary between semantics and pragmatics is blurry.
Phonetics is a bit difficult. I find the placement just below phonology not good enough; this would make it look like phonemes are a larger unit that are built up of speech sounds just like what we call words are made up of the units called phonemes, or phrases are put together from words. Rather, phonetics and phonology look at the concept of "sound" from different perspectives - one is concerned with "what comes out of your mouth", the other is concerend with "what is in your head". W.r.t. how research is done in the two fields, the questions that phonologists are concerned with and how they are approached are conceptually much closer to what is done in syntax and morphology; phonetics is not primarily interested about the rules and patterns that govern the inherent structure of linguistics, but rather on their physical properties. So maybe one should place phonetics and phonology more parallelly to each other, but in the end both are concerned with form rather than meaning, so this is a bit of a tricky one.

As for the labels, I don't find the graph you showed too inaccurate. (Interestingly, the descriptions I chose are almost identical to your picture - it seems like the classical definitions of the fields are very persistent.)
One might argue whether "speech sounds" precisely captures what phonetics is about in contrast to phonology, the addition of "speech" is very important here.
As for syntax, one can decide to drop "sentences" if one assumes that sentences are also just kinds of phrases, but this is hairsplitting.
I do agree with the summar "literal meaning" as opposed to "meaning in context of discourse". Eventually, this is what usually separates the two fields: While semantics is interested in a precise account of the meaning of linguistic entities as they are, it doesn't quite care about what could be there "between the lines". Subjects of linguistics that raise questions concerning speaker's intentions, dynamics of conversation, linguistic economy etc. have established as a field on their own, while there obviously is still a close connection between research in semantics and pragmatics. (For example, presupposition theory is usually regareded as an issue of pragmatics, but the way it is handled, it is actually a very semantic topic.) And pragmatics did take a long time to establish as a field on its own (one of my professors used to say "There is no such thing as pragmatics, there's good semantics and there's bad science." I won't attempt to comment on that here.) The element that is reponsible for when this distinction comes into play is probably best described as the "context of discourse", leaving semantics as the field concerned with the non-contextually-modified, more literal meaning, so I'd agree on these lables as long as I don't find anything better.

In addition, as already addressed by Mitch, the graphical representation with circles seems to suggest an inadequate subset relationship (i.e., the questions that phonology is concerned with is part of the questions that syntax is concerned with, for example), which is inadequate. Rather, at least in as far as the left half is concerend, it should be a kind of mereological relationship (phrases are made up of words are made up of phonemes). The relationship might mot be as parallel for the right half, but pragmatics could be seen as made up of semantics + conversational context (at least pragmatics can't be done without semantics, just like syntax can't be done without words). This is why I chose ellipses that are stacked on top of each other (in hindsight I think rectangular blocks would have been nicer because they can better be thought of as being piled up from bottom to top), while allowing for some overlap/blurry borders in order to show that they are not entirely separate and sharply distinguishable from each other.

tl;dr: What I find most inaccurate about the illustration is that semantics is depicted as the thing that comes after syntax, which is inaccurate in that 1) the study of form and the study of meaning are fields that exist next to each other rather than on top of each other, 2) semantics starts at the level of words already, not after sentences. The placement of phonetics is difficult; labels can in some respects be argued about, but for a three-word description, I think they are good enough.

It represents something similar to “made up of”, though more accurately, it means “logically depends on, when analyzing”. It is the logical onion of classical taxonomic analysis – you would be analyzing a particular utterance – and the procedural requirement was that you had to first capture the utterance in terms of “phones”, then group phones together into “phonemes” based on distribution, then organize sequences of phonemes into morphemes, which create words whose distribution is covered by syntax. The taxonomic (behaviorist) approach had nothing to say about semantics, probably because they could not see any operational means of analyzing meaning. We’ve gotten over that limitation. Pragmatics didn’t exist in linguistics until the late 60’s (and was subsumed under semantics for a long time), so of course the taxonomists had nothing to say about it.

The diagram is basically a way of controlling the flow of information in analysis: you have to start with a narrow phonetic transcription, free of preconceptions about communicative function, word order, morphophonemic and phonemic analysis. Then looking just at the product of phonetic analysis (a transcription), you can discover the phonemic analysis – this is done without referring to a morphological analysis or an analysis in terms of quantifier scope, at each stage defining elements of level N in terms of things of level N-1. And so on, until you get to the outermost shell.

Insofar as this onion has no current practical application, especially at the introductory / internet level, it is pretty useless, except as a stimulus for asking "what the heck does that (even) mean?". It does not represent any basic claim of a surviving linguistic theory (the implied modules, though, are widely accepted, to some extent if not totally). I would not ever use such such a dominance diagram. It does not represent actual contemporary analytic practice (i.e. that is not how a field worker operates in studying a language), and from what I can tell it only represented a theoretical ideal even in the remote past, and does not represent actual rigorous practice. We study pragmatic function early in the game, in order to discover what the difference is between some two verb tenses, which are realized in part by a change in tone. I don’t deny, though, that most phonological field-workers schedule their pragmatic investigates for a few years after their transcription-and-paradigm work, and field-pragmatists leave for future investigation what the exact vowels or morphemes in the language are.

As for developing tests for literal vs. implied meaning, I like the Chierchia & McConnell-Ginet textbook. I would say that a grasp of the difference between linguistic entailment and social-contextual inference is the core of the study of language and law, and is the area where theoretical linguists can in principle make substantive applied contributions (if that is an area of interest). I do accept that the term “literal” is used arcanely, in a way that doesn't capture the lexicality of poly-morphemic constructions with non-compositional meaning.

This is commonly said, but I wonder whether it really should be words in the plural. What are some phrases that have more than one word?

Prepositional phrase? The preposition is ordinarily a word, but the other part of a PP is not a word -- it's a noun phrase (though a NP containing a single word is possible, of course).

Sentence? Neither a noun phrase nor a verb phrase is a word.

Noun phrase? Well, a NP might have an article and a noun, but sometimes article is made part of a determiner phrase, and the noun part of an N-bar.

Not the answer you're looking for? Browse other questions tagged syntax semantics morphology theoretical-linguistics pragmatics or ask your own question.

9
What are the different ways in which languages express the notion of passivity?
13
Does any language use bound morphology to express the concept "less"?
2
What does linguistic under-determinacy mean?
3
What linguistic category does Swahili's *-ni* correspond to?
0
How does the Thai language express the instrumental?
0
What should the phonological rules be for this alternation?
1
What is the general term for linguistic categories?