In what ways might dependency grammar be a better fit for free word order languages?

The advantage that the flatter analysis has becomes apparent when one alters the word order:

The hierarchy of words in the dependency analysis remains consistent despite the change in word order. There is one change only: the two nominals N1 and N2 have simply swapped positions. In contrast, what the corresponding phrase structure analysis for the sentence should be is not immediately evident. To achieve the word order shown, the phrase structure account would need at least two changes: the VP constituent would have to swap positions with N1, and then within the VP and the V and the nominal N2 would have two switch positions.

The difficulty facing the phrase structure account in this case is due to the presence of three layers instead of just two. Phrase structure syntax, however, does not in itself necessitate such layered analyses. If one converts the dependency analysis in (1a) directly to phrase structure, one gets the following tree: 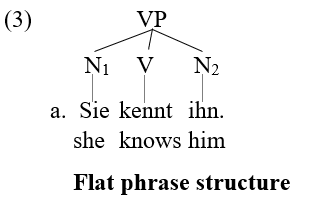 This tree is a manifestation of phrase structure because the number of nodes (four) outnumbers the number of words (three). But there are only two levels now, which means the ability to address the alternative word order is the same as for the dependency approach: 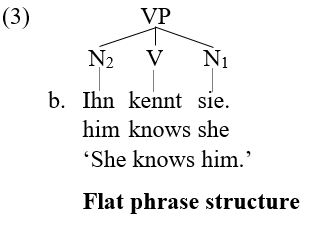 Just one change is necessary, just like for the dependency analysis in (2a). The problem for many phrase structure grammars in this area is that they build on the presence of a VP constituent. If in fact no such constituent exists, then a crucial pillar of support for phrase structure syntax in general disappears and there is less reason to choose phrase structure over dependency.

In sum, the reason why DG people claim that DG is better for addressing the syntax of free word order has to do with the flatter dependency structures. Flatter structures provide less opportunity for difficulties to arise when confronted with alternative word orders. The issue of flat vs. layered structures is addressed in more detail in Wikipedia:

Not the answer you're looking for? Browse other questions tagged grammar dependency-grammar or ask your own question.

2
What it the best algorithm for dependency parsing?
3
Is there a grammar of syntax that takes into account inherent syntactic ambiguity in natural languages?
8
Is there a measure for grammatical similarity?
2
How to construct a grammar given a text and a dictionary
4
Do Modern Grammar Theories fall short in explaining Free Word Order?
2
The Meaning <=> Text Theory (MTT)
0
How to build a robust transliteration scheme across languages?