Why is there no Subject-Auxilliary inversion in Subject questions?

In questions where a wh-element refers to the object, we can observe SAI (Subject-Auxilliary inversion).

As far as I'm aware, C-head has a [+Q] feature and it's occupied by a null bound morpheme that needs a verb to attach to. Since V-to-C is impossible (for the previous step, V-to-I is illicit as well) in English, only auxiliaries have the power to raise to C.

But why is it so that wh-elements pertaining to the subject of the clause do not trigger SAI? The C-head still has the [+Q] feature and do-support is available in English if there is no other auxilliary present.

Now, as I'm reading my question, it seems that there's simply no "space" to do such an inversion. "Who" is in [spec, CP] and auxiliary after inversion occupies the C-head after head-to-head movement. Sure, according to Rizzi's proposal there are other functional projections above CP, but it'd seem too convoluted to even resort to that.

So, in conclusion, for SAI to take place, either the subject (wh-element) would have to stay in its EPP position, or the auxiliary to move to an unnatural (for him) [spec, CP] position. Given it's a head, such movement would be illicit. 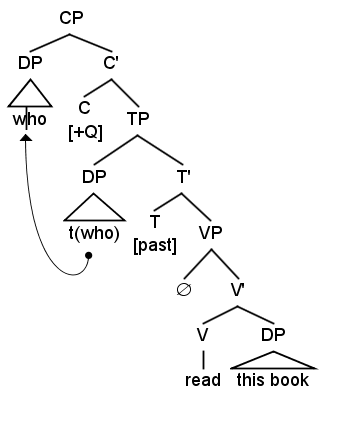 This explanation is consistent with an approach to syntax that grants the online production and processing of sentences a decisive role. Syntactic structures are produced and processed in time from earlier to later. If the left-most wh-expression in a question in English is not the subject, it must be marked as such by inversion, and this inversion then aids the processing of the sentence.

The explanation is independent of the particular theoretical apparatus that one prefers. The Government and Binding (GB) (or Minimalist Program (MP)) apparatus assumed in the question and the OP's answer is at best a tangential matter. One need not acknowledge various X-bar theoretic constructs (e.g. EPP, CP, V-to-C, etc.) for the explanation to work. I would even argue that such constructs result in opaque and obtuse linguistic reasoning.

4
Why we do not usually say "who did eat the apples" while "What did she eat" is perfect to use?
4
When does do-support apply in wh-questions?

3
"Enumerators" and Approximate Inversion
3
Raising to subject or Subject control?
1
The grammatical subject, the logical subject, and something new
7
What is the purpose of Subject-Verb agreement?
1
Does a main verb undergo inversion in "Has he any shame?"
0
Transposition of words in questions
4
When does do-support apply in wh-questions?