As French is a so-called Roman language, where are the cases? [duplicate]

French language is known to be a Roman language, just like Spanish, Italian, Swiss Roman… Those Roman languages are told to be originating from Latin language.

When I learnt Latin, one of the first (and most important) things I learnt, were the cases (nominative, accusative…), and let's face it: the Latin language is full of cases.

Language families classify languages according to their history. Italian, French, Spanish and so on are Romance languages because there was a gradual evolution from Latin to these languages. Evolution means change: some features of the resulting language differ from the original language. Usually languages in the same family share a lot of vocabulary, but may have different grammatical properties.

During the expansion of the Roman Empire, Vulgar Latin spread around the Mediterranean. It gradually split into separate Romance languages. Vulgar Latin mostly used Latin vocabulary, but it evolved a simpler grammar. This is probably because, for many of its speakers, it was a trade language, not a native language. Among the major simplifications were the gradual erosion of declensions and the loss of the neutral gender. Romanian has three cases, Old French had two, and most modern Romance languages only have one.

Pronouns tend to preserve more distinctions than nouns. For example, most (all?) Romance languages have different forms for subject and object pronouns, at least for some persons. French has traces of a neutral case with qui/que and il/elle/ce.

This phenomenon is not unique to Romance languages. For example, English, Dutch and many Scandinavian languages also lost declensions and have considerably reduced gender variations.

The pronouns are cased, though many of the distinctions have been erased in this bizarre fashion: 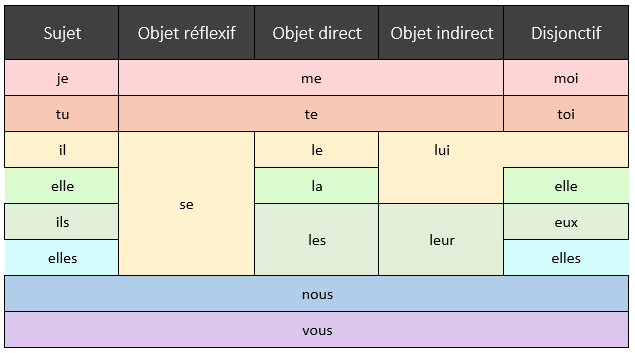 As jlliagre implies, not all these forms are derived directly from their Latin forms. Also, I don't know Latin, but as far as I'm aware the uses don't overlap perfectly.

French cases are still used for the same purpose, though — to mark a noun's role in the sentence.

For example, say I either send Marie across campus to Abdul's office, or Abdul to Marie's office. Those two scenarios could be expressed:

These sentences differ by just one letter, but from Marie's point of view they're pretty different. After all, in one she's la, walking across campus, and in the other she's lui, staying in her office. :)

But in any case (no pun intended), as jlliagre said, the category of Romance or Latinate language doesn't imply that all the qualities were inherited. It's more about a genetic history than it is about functional similarity. Linguistic apples sometimes fall far from their trees.

They are called Romance languages and not "declensive" languages for a reason. They have indeed lost their declensions (which remain in very rare cases like pronouns, e.g. il/lui) but they have kept a lot of characteristics from Latin. Note also that the Romanian language still has some declensions.

A similar situation exists in English, which belongs to the Germanic languages family, despite a large amount of French vocabulary and not only having lost its declensions but also grammatical gender.

Not the answer you're looking for? Browse other questions tagged latin french cases romance-languages or ask your own question.

10
Why there are no grammatical cases in the French language?

29
Why do so many core Romanian words with Latin roots come from different roots than in the other Romance languages?
17
When and how did French become a non-null-subject language?
5
Why do Spanish and other Romance Languages use the preposition "a" for culinary styles?
10
Why there are no grammatical cases in the French language?
2
How did the Latin past participle suffix -atus develop into modern French -é?
11
Where did the use of the two auxiliaries in the Romance languages come from?
9
Why are French, Italian, Spanish etc. listed as SVO languages?
37
Why do the Romance languages use definite articles, when Latin doesn't?