What's the term for a word which contains an affix?

From my basic lay understanding of non-polysynthetic linguistics (and this answer), a word may be either:

Is there a more specific term for a word of the #2 type? For example, the word "enjoy" would be an instance of that term, but the word "joy" would not.

An existing english.stackexchange question asks almost the same thing, but its answer is that #1 is a root and #2 is a root plus affix(es), which doesn't quite answer my question. I'm looking for a term that specifically means #2.

There are appropriate adjectives, but not nouns: "joy" is monomorphemic, "enjoy" is polymorphemic (under a liberal interpretation of English morphology). Other words like derivation, inflection etc. refer to the morphological process, but not the product of a morphological process (or its lack, in the case of an underived / monomorphemic root). Also note that an answer from English SE is likely to only consider the kinds of morphology found in English, and in many languages, roots are not even words.

There are several common terms in use, e.g. monomorphemic or simplex words, and polymorphemic or complex words; cf. the screenshot below from The Oxford Handbook of the Word (from the article written by Geert Booij): 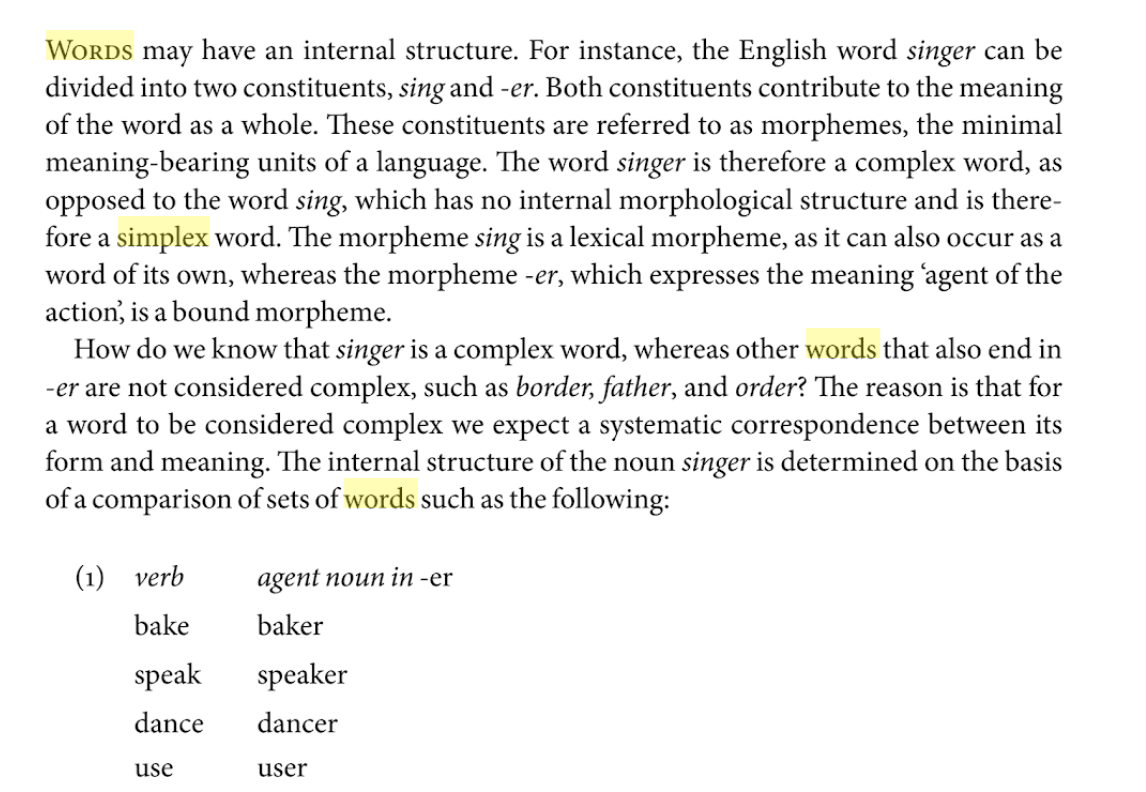 Incidentally, I would analyze enjoy as a simplex word, at least synchronically in (Modern) English; see the screenshot above.

There is a lot of terminology floating around that.

First, the basics: There are word forms occurring in real life. A word form belongs to a lemma that is a canonical word form relating to some other forms (e.g., for the lemma "have" there are the word forms "have", "having", "has", and "had"). Then, there is a stem that is generated off a word form by cutting some affixes. All those terms relate to basic morphology (there is not a lot of it left in English, other languages have a much richer morphology). Note that one lemma can have several (more or less obviously) related stems, like Latin scribere, scribo, scripsi, scriptum exhibiting three stems (present, perfect, and supine stem).

Morphemes come into play when you consider semantics. Derivational morphology and composition are means of creating word forms (and even stems) containing more than one morpheme. A word form containing only one morpheme is called monomorphemic. With two morphemes, it is dimorphemic and so on. As an opposite of monomorphemic, the term polymorphemic can be used.

You can also put your focus on word formation, than you find that a word is suffixed (only rarely suffigated, has a suffix attached), prefixed (with a prefix), infixed (with an infix), or just affixed (with an unspecified affix).

'Derived words' are also used, especially in the context of functional linguistics. In French, we don't use 'complex words' for the words su/pr/in-ffixed, rather we used 'les mots dérivés'. You'll find different terminology associated with these, but the standard assumption is that 'affected' 'marked' or 'derived' are always the opposite of 'basic form' 'root form', etc.

Affixation (def), "the result of adding an affix to a root word" (WordNet)

Not the answer you're looking for? Browse other questions tagged terminology morphology or ask your own question.

13
How to distinguish a polysynthetic language from other languages? When is something a word?

15
What are the criteria that distinguish clitics/particles from affixes?
4
Does the term "(highly) agglutinating language" refer to inflectional endings, word-formation processes, or both?
1
stem classes and the terms "fusional" / "inflectional"
9
Difference between ideogram and logogram?
3
The classification of morphemes