difference between c-command and dominance

Node A c-commands node B if:

I understand the bigger picture, but my non-linguistic brain fails to see the basic distinction between "c-command" and "dominate." How can A "c-command" but not "dominate" B?

syntax terminology trees
Share
Improve this question
asked May 18, 2018 at 1:39

The trick is that C-commanding effectively goes up one level first, and then checks dominance. In other words, a node C-commands everything dominated by its parent, and not by itself.

Take this (very simplified) tree as an example. 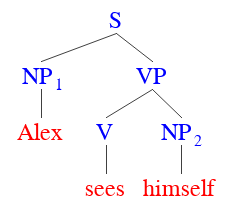 This is important, because it seems to be how reflexives work in English: the NP "Alex" C-commands the NP "him", which makes it change from "him" to "himself". But if "Alex" is buried any deeper in the tree, as in "the man who works with Alex saw him", then "Alex" no longer C-commands "him", and so no reflexive happens.

Not the answer you're looking for? Browse other questions tagged syntax terminology trees or ask your own question.