What parts of speech / word classes do languages most frequently lack?

Among conlangers, AllNoun is a notable syntax because it only makes use one part of speech / word class, which is analagous to nouns. A natural language I've heard of (but I can't remember or find a reference to it anywhere, I think it was an Australian aboriginal language) only has three verbs. I've heard that there are some North American languages that don't exactly have nouns, but I'm not actually sure if this is true or not.

What other languages don't have parts of speech or word classes? Which do they lack, and how does their syntax work in a way so that they are not needed?

For many languages it is claimed that they lack adjectives (for instance Thai), and that either nouns or verbs are used instead. Others claim that all languages have adjectives, if you look closely enough. Japanese has two types of adjectives: noun-like and verb-like. However it can also be analysed as having no adjectives, if the verb-like adjectives were considered just to be odd verbs and the noun-like adjectives were considered just to be odd nouns. In some languages adjectives are a closed class of words - are they still then adjectives? Not if being an open class is part of the definition of adjective :) (An open class may gain and lose words while a closed class is of a much more stable size.)

Ditto for languages that are claimed to lack nouns or verbs, it's a matter of how "noun" and "verb" is defined. AFAIK there is not yet consensus on any language lacking nouns or verbs.

Lacking articles (the, a) is not so uncommon, but I don't think there are languages that lack determiners as a whole (articles are a subset of determiners).

Since the statement "X has no Y" can be disproved with just one word, you might find more researchers willing to say "X has very few Y". There are several languages in Papua New Guinea that have remarkably few verbs, sometimes as few as twenty.

There is an aboriginal language that some people claim has only three verbs, but when I looked at the reference grammar, the verb turns out to be incredibly complex, so I suppose one could just as easily argue that the language had lots of verbs and a required morpheme that came in three versions.

Here is another interesting paper about languages with very few verbs.

I suspect one could make the claim that most languages either lack counters (or measure words) or that they've become (mostly) extinct. An example in English would be cattle. One does not say "I have 3 cattle", instead one says "I have 3 head of cattle". The book I suspect you are thinking of is Women, Fire and Dangerous Things. In it, in Chapter 6, there is also a short discussion of a single Japanese counter, hon (which is used to count long thing things such as sticks, pencils, rivers, phone calls, ball game hits & pitches and dried snakes) and how these categorize how these are in some respects metaphors for how one thinks about the world.

Re AllNoun: as this is a conlang, and an artificial 'language', I'd suggest that it can't be considered a true language until it has native speakers, and that if it did have native speakers they would expand the language to suit the full range of requirements of human beings, such that it would have at least two POS categories, one that includes 'verb'-type words and one with 'noun'-type words. (Schachter 1985). This is what happens when speakers turn a pidgin into a creole.

Yes, some languages have a small, closed verb category. But in these languages the verbs are highly generic and combine with other elements (which may include coverbs, adjectives, nouns, other verbs, etc) to create verb complexes (or complex predicates) that have more specific meanings. In this way they are able to express everything that a human being needs to. (Schultze-Berndt 2000)

I doubt there are any languages without nouns. The smallest number of POS categories that I have heard about in any language is two, a 'verbs' category and a 'nouns' category. But each of these categories will contain numerous words that can be used to fill the functions that in other languages will fall into different POS categories; ie, the full range of functions is there it's just that, morphosyntactically, they are compressed into two POS categories. Thus Australian languages are usually analysed as having no distinct category of adjective. Instead, words that have adjectival meanings will be members of the same category that includes nouns, in a category often called 'nominal' in grammars of Australian languages. (Goddard 1985)

Finally, many languages will lack some part of speech that's present in some other languages, eg English doesn't have relators or coverbs. It's impossible to give a brief answer to how languages deal with this and in fact, this is what linguistic analysis is largely about, finding out how each language uses its particular set of grammatical and lexical elements to achieve the full range of functions that humans need. I've already described how languages with a small, closed verb class are able to express the full range of meanings required by speakers. Another example could be the question, how does English get along without politeness markers? It does so by using special vocabulary and morphosyntactic constructions, and I doubt many native speakers feel a lack. (Schachter 1985) 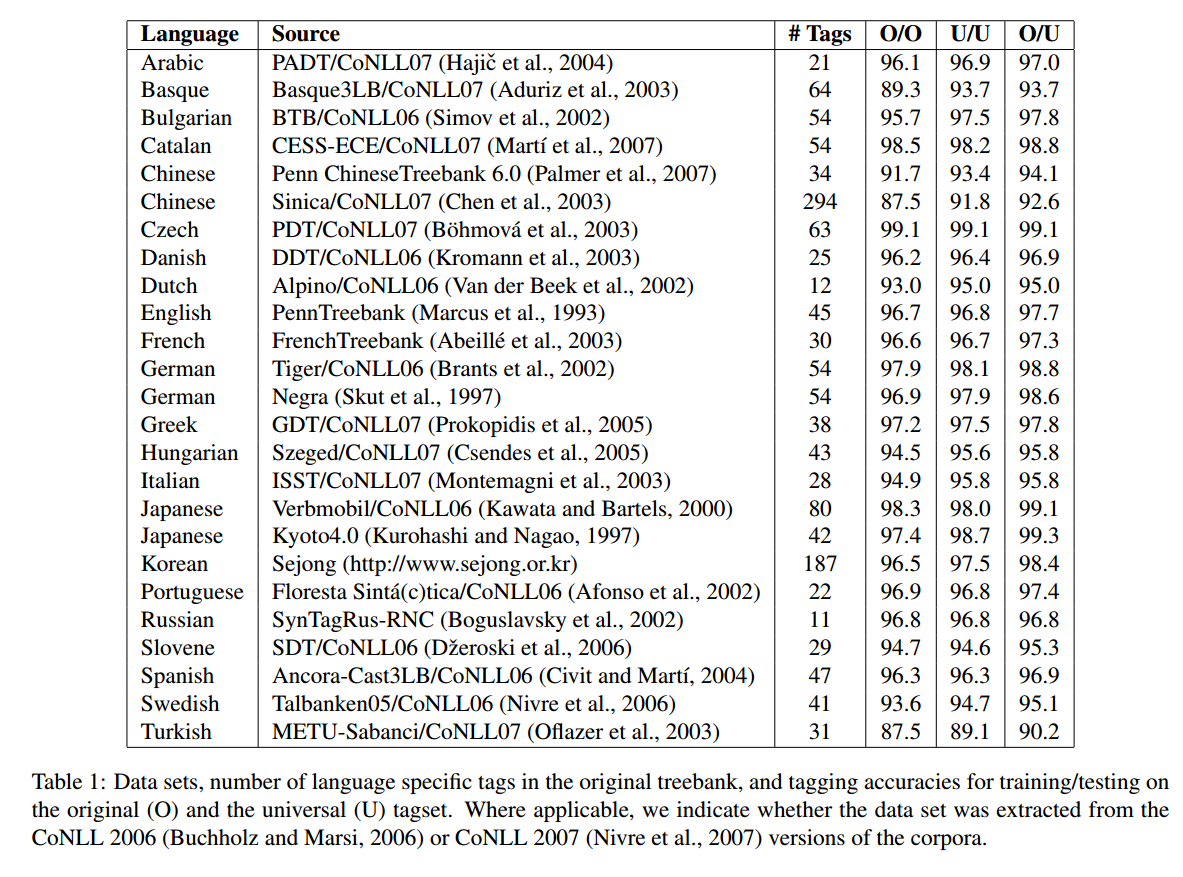 The number of tags depends on how much fine-grained the annotations are intended to be, as well as the language itself. 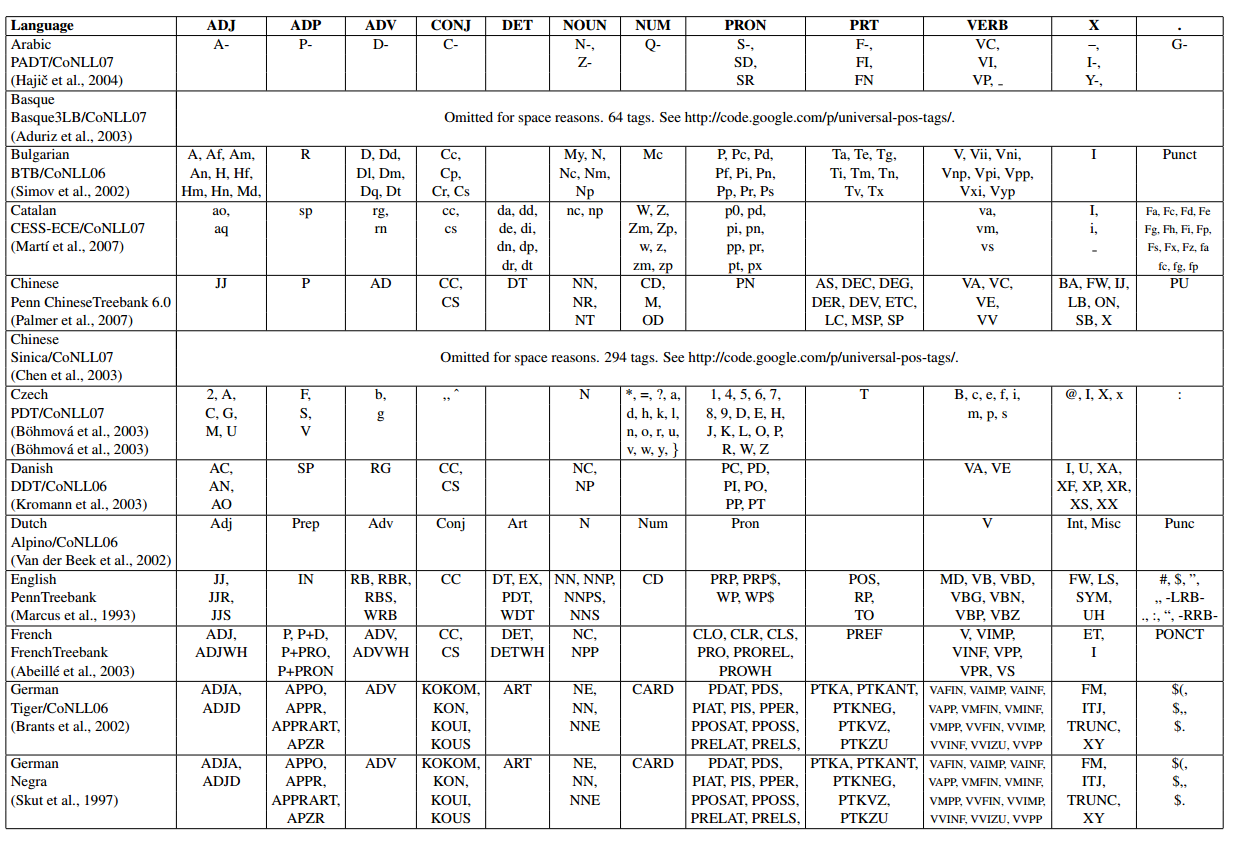 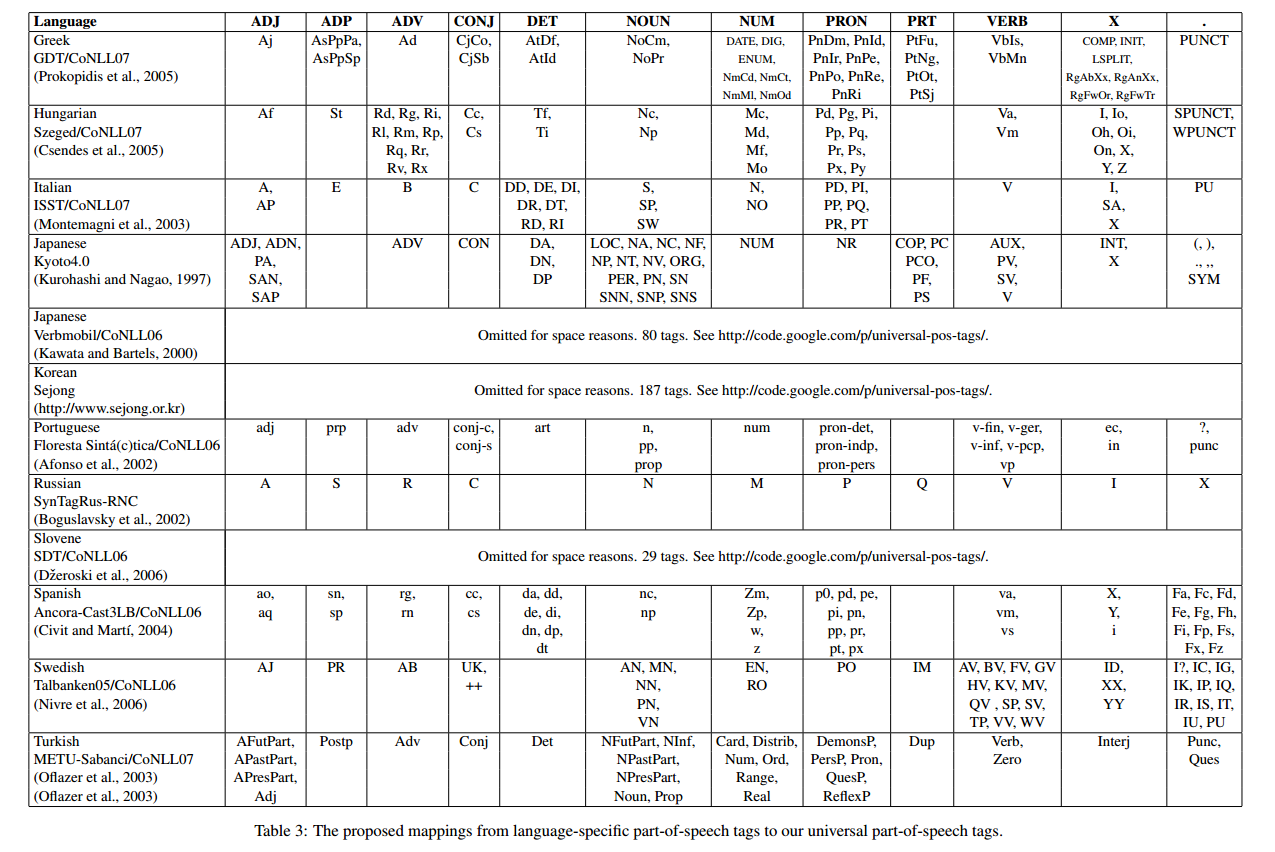 More information can be found on the Universal Dependencies website.

Not the answer you're looking for? Browse other questions tagged parts-of-speech word-classes or ask your own question.

10
Is there a strong case for the existence of languages that lack a clear morpho-syntactic distinction between nouns and verbs?
4
are what we translate as "adjectives", "nouns", etc, the same kind of words in no indo-european languages?

8
Are there some analyses or linguists with the view that Chinese does not have lexical word class?
17
Are word classes universal?
1
The word 'all' as an article, rather than an adjective?
8
What parts of speech do professional jargons tend to mint?
10
What really makes adverbs different from adjectives?
4
When analyzing a set of corpora, are there any standard practices with regard to the classification of gerunds?
4
are what we translate as "adjectives", "nouns", etc, the same kind of words in no indo-european languages?
1
What is the part of speech of 'modifiers to adjectives'?