Why are English loanwords ending in /d/ or /t/ systematically transcribed into Hangul syllables ending in ㅅ rather than ㄷ? This seems strange, since when ㅅ is followed by a vowel, the coda is realised as [ɕ] or [s]. Also, there are native words ending in ㄷ, which would be a better phonetic match. Is there a principle explaining why ㅅ might be preferred?

Background
Before we start, I should explain for non-Korean speakers how coda-position ㅅ ("S") is pronounced in Korean. First, as jogloran has already hinted at, Korean has a tendency to avoid codas, converting them into onsets wherever possible (i.e. if the next syllable has no onset). Slight simplification but good enough for now. Second, ㅅ ("s") when pronounced as a coda (i.e. the syllable is pronounced in isolation or the following syllable has a non-null onset) it loses its [+stri] feature and is pronounced more like a soft (unaspirated) "t".

The point being that 인터넷 ("internet". Literally "intheneys", pronounced "intheneyt") is pronounced in isolation in more-or-less the same manner as the English "internet". However, again as jogloran noted, when followed by a null-onset syllable, as in 인터넷이 (intheneys-i, internet-SUB) or 인터넷에 (intheneys-ey, internet-DAT, "to/at the internet") the coda ㅅ adjoins to the following syllable as an onset and does not lose it's [+stri] feature. This results in the surface forms "in-the-ney-si" and "in-the-ney-sey" respectively.

Answer
It is important to note that several codas undergo the same reduction as ㅅ. Namely, 밧, 받, 밭, and 밪 (pas, pat, path, and pac respectively) all have the same surface structure: 받 (pat). Of these "t" codas, ㅅ is by far the most common.

Therefore, Koreans most readily associate "t" codas with ㅅ. From here it is not difficult to imagine why ㅅ used as a "t" coda, even in English loanwords.

Loanword adaptation as first-language phonological perception. by Boersma and Hamann is a paper I have heavily cited on this website. Essentially they propose that a learning algorithm dynamically ranks OT perception constraints over time such that rules preventing specific phonetic units from being perceived as specific phonological units become ranked in such a way that valid perceptions (for example *[a]/a/, "don't interpret the phonetic [a] as the phonologic /a/" becomes lowly ranked because it can be violated freely with no loss of meaning).

Essentially, this paper provides a mechanism by which Koreans can perceive phonetic [t]s in the coda position as the phonologic /s/ (since the constraint forbidding this perception becomes lowly ranked). The result is a UR containing the /s/ coda which then explains its production as [s] in cases like "인터넷이". This UR /s/ is then reflected in their orthography.

Independent of implementation-specific details such as one that acattle mentioned, the possible alternative that you mentioned appear word-finally only in native Korean nouns -- word-final coronals do not appear in Sino-Korean nouns (Sohn 2001). It's plausible that they're more likely to adapt to the Sino-Korean pattern, which has the common t-s alternation.

More significantly, I think it's too strong to say that it's "systematically adapted as /s/." Kang 2003 took a corpus of loanwords and found that word-final coronal stops ([t]/[d]) were largely adapted with an epenthetic final vowel. 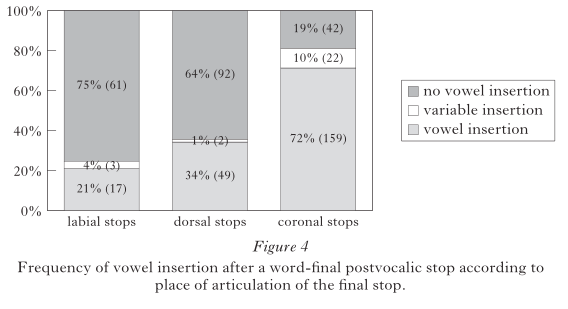 As you can see, there's a coronal place effect: vowel insertion is far more common for them than for /p/ and /k/. In fact, every instance of final [d] was adapted with vowel insertion.

Not the answer you're looking for? Browse other questions tagged phonetics orthography korean transliteration phonotactics or ask your own question.

2
Rules of Yale Romanization of Korean
5
Criteria for separating Korean words
4
Where can orthographic Korean words be split at the end of a line?
1
What was the most usual and most recent system of writing Korean without any hangul at all?
2
“Regarding” in Korean and Japanese
2
Irregular Fortition(경음화, 된소리 되기) in Modern Korean
1
When transliterating English words to Korean, why does the first F become a ㅎ?
1
Explain ㅎ being silent in Korean language
9
Why is Hangul (Korean script) not considered an Abugida