Sounds that are treated as phonetically equivalent

I suspect that I will not use the right terminology here. Apologies in advance.

Is there a word for the phenomenon in which speakers of a language treat two different sounds as equivalent, even though they can hear the difference between them?

One situation in which this occurs a lot is when speakers of the same language have different accents (e.g. from different regions, economic classes, etc.), and these accents pronounce some corresponding sounds differently. The speakers can hear the difference, but they treat the sounds as equivalent.

(For examples, certain dialects of Spanish pronounce the word jamón (tr: ham) like xaˈmon, while others pronounce it like haˈmoŋ. In other words both the initial and final sounds differ between the two versions. Most native speakers can hear these differences, but they disregard them; that is, they treat xaˈmon and haˈmoŋ as the same word.)

Is there a name for this equating of sounds that are perceptibly different?

Note that the phenomenon I'm referring to here should not be confused with the case in which someone is unable to hear the difference between two sounds.

Yes, this term is Allophone.

Take English /k/.
Unvoiced plosive consonants are usually aspirated in English, so many words would have /k/ produced as [kʰ], as in "cat".
However, in some cases, it stays unaspirated [k], as in "mark".
/k/ can also undergo other transformations, like palatalization in "thank you".

People of different dialects produce same phoneme differently.
Furthermore, even the same person produces the same phoneme slightly differently every time. In addition, sound can be distorted significantly or frequencies can be cut off, like when using a broken telephone or handy loudspeakers.
Nevertheless, an English listener maps all mentioned phones to the /k/ phoneme.

Note that the phenomenon of Allophone is strictly language-specific. Many languages, like Thai, make a clear difference between [k] and [kʰ], and they are never interchangeable.

I don't know of a specific term for this, but Edward Sapir (1925) presents this situation in his "C and D languages": two languages that are phonetically different but have a similar phonemic patterning. One can apply the same reasoning to two different dialects. Here is an example taken from Dresher (2009:62) 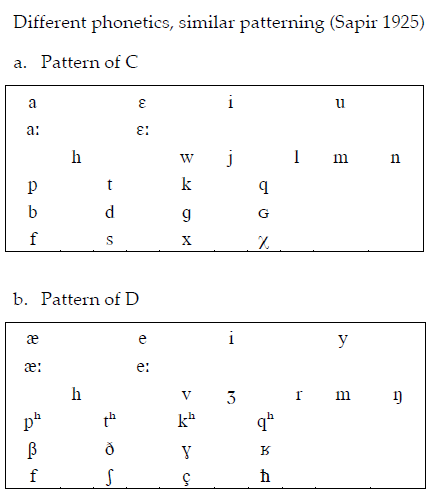 It happens. I don't know of a good word. Assuming the SPE analysis for convenience, in English in a latinate word, at the end of an unstressed word-initial unstressed syllable, /e/ can often be either tense or lax. Examples: "eliminate", "deliberate" (v.), "revise", "preliminary", "demonic". The difference in other contexts is phonemic, so presumably people can hear the difference.

Not the answer you're looking for? Browse other questions tagged terminology phonology phonetics phonemes or ask your own question.

3
What is juncture in phonetics and/or phonology?
5
Question regarding leading "r" sounds in Japanese
5
Can one tell interdental n, l, from alveolar n, l, by hearing?
2
Advice on voiced and unvoiced in sanskrit sounds
6
How are the palatal approximant and palatalization different in Slavic languages?
3
How these close sounds are distinguished in native language
0
How linguists determine the sounds a speaker is performing
4
The difference between [w] and [u] (especially between the states of the lips)
7
Phonetic distortion when words are borrowed among languages
13
Is the "p" in "spin" really a "b"?