How does 'like a book' befit the Translative, and not Essive, Case? 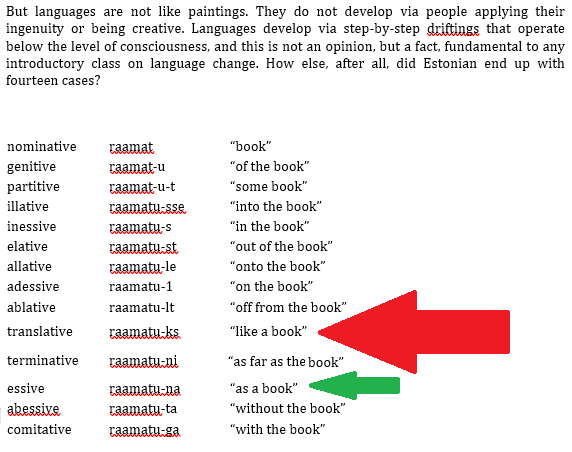 I speak no Estonian. 1. But how does the preposition 'like' conveys the Translative Case? E.g., an encyclopedia looks 'like a book', but encyclopedias are not becoming or changing to books, as they aren't intended to be read cover-to-cover like books.

The translative case (abbreviated TRANSL) is a grammatical case that indicates a change in state of a noun, with the general sense of "becoming X" or "change to X".

The glosses look approximately reasonable to me, but the English glosses themselves are arguably ambiguous and don't summarize well what kinds of situations the cases are used in.

(I don't speak Estonian, but I do speak Finnish, which is closely related, so I'm taking the liberty to use Finnish examples instead.)

The translative case is used when something becomes something else; "he turned to stone", "hän muuttui kiveksi" (the root word is kivi; but of course the English "into something" is generally and literally translated with the illative case, so if I drill a hole into a piece of rock, "poraan reiän kiveen"). It is also used e.g. for metaphors; "for a stone this one is soft", "kiveksi tämä on pehmeä". Also, "for example" is "esimerkiksi". Maybe a better gloss would be "for a book" but it's no less misleading and opaque than the given gloss.

The essive case is used when something is in a particular place, position, or attitude. If I dress up as a book, I go to the costume ball "kirjana". If I am really in a hurry my hair flies back like a horn, "tukka torvena" and I move like my head was my third foot "pää kolmantena jalkana". When I am at home I am literally "kotona" (the base word koti means home; though native speakers who start thinking about this phrase will often find the construction somewhat archaic).

I can't speak Estonian either, but I can grab the first Google link that comes up: https://www.colanguage.com/translative-case-estonian

From the link, the translative is also used to express nouns acting as purposes; for example, getting someone a book as a present.

We still express such purposives in English with as, and not like, and I don't see anything in the linked article that corresponds more closely to English like.

It may be that the linked article is not exhaustive. Or it may be that McWhorter is once again being sloppy in a popular exposition, doesn't particularly care about the nuances of Estonian, and arbitrarily changed the gloss of the translative so as not to coincide with the essive.

A nice question, especially when having considered the implications of non-static -- that is, as, since it is often related to verbs -- vs static -- like --dichotomy in English.

Unlike in English semantics, the Estonian pairs of Translative VS Essive include not just static/non-static, but also evident / non-evident dichotomy.

The semantics of the Estonian cases are indeed similar to those of Finnish, with the exception of the modal meaning. Cf. the examples as found in the link given by Nick Nicholas:

Est. Translative: Ta peab mind targaks = He considers me (to be) smart. Õpetaja oli meile eeskujuks = The teacher was a model figure for us.

The general difference between Translative and Essive is that of 'Non-Static and Evident' Translative vs 'Static and Non-Evident Essive', cf Finnish:

Liikemiehenä olen samaa mieltä. = As a businessman, I agree. (The state of being a businessman is not evidential to an addressee)

Hänkin tulee liikemieheksi. = He is to become a businessman, too. (The state or possibility of becoming a businessman is evident to a speaker).

The Estonian seems to follow the same rules, except that 'Modal Essive' in Finnish -- [to be regarded or to be considered as] -- has become the Estonian 'Modal Translative'.

Therefore, my intuition is that the author has been referring mainly to that particularly Estonian, 'modal' semantics of the Translative.

Not the answer you're looking for? Browse other questions tagged cases or ask your own question.