Why and how do some words come to mean multiple completely unrelated things?

Take an example of the English word 'just'.

While it means 'morally fair' in "a just social system", it also means 'a little' in "just less than 8%".

For a myriad of colourful meanings of 'just', check Bing. A portion of it is below: 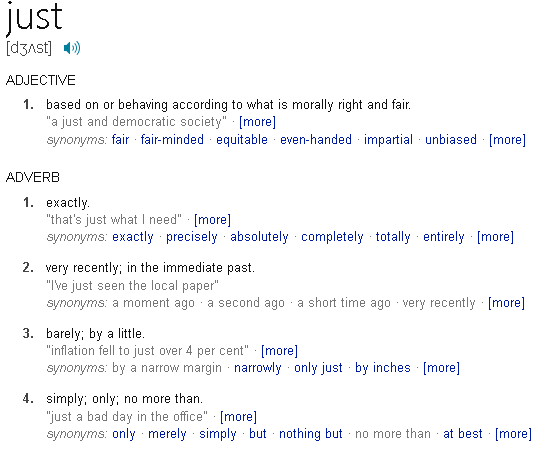 1. Why and how do such words come to mean so different, unrelated things?

2. I am a native Hindi speaker. I also know Marathi and Sanskrit. Such words are too rare in Indian languages, if any. So, I want to know if this phenomenon is present only in English (and some other languages) or is it common to a large number of languages (with different origins and history).

3. What does the fact that this phenomenon is common in some languages and not others, tell us about the evolution of those languages?

There are a number of mechanisms:

Without concrete data, we don't have much reason to believe that such words are rare in Marathi or Sanskrit. You may just not be aware of them. In general, native language speakers do not pay much conscious attention to different meanings of different words, while a lexicographer (who composes a dictionary) must pay attention to even the most subtle differences.

EDIT: The sense evolution of "just" may be a culturally-specific phenomenon, so I can see how it may not be so obvious to people from other cultures.

Not the answer you're looking for? Browse other questions tagged english historical-linguistics evolution meaning evolutionary-linguistics or ask your own question.

23
Was there a Semitic influence on Proto-Germanic?
2
Where does the “t” in some words like “night” and “fight” come from?
1
Are there any other examples of words being borrowed via their written forms only (or written forms causing reevaluations of spoken forms)?
9
L2 acquisition as a factor in loss of “complex” grammatical features
1
Where do Latin and Greek words come from?
6
Earliest recognition that Romance languages are related
4
How do we know the definition and meaning of words like “though”
2
Isn't it obvious that linguists must specialize in language contact to study the history of English?