How many ways are there to produce alveolo-palatal fricatives?

My textbook mentions three: laminal prepalatal, dorso prepalatal and postalveolar palatalized. If we take each name strictly, they'll surely denote different gestures. I'm okay with this, what troubles me is that online all recordings I can find over alveolo-palatal fricatives sound relatively the same. Now, how can that be? I don't know how to detail the difference in the auditory effect between a laminal or dorso prepalatal, but one thing is sure, each palatalized sound include a sort of [j] acoustic warping, and I didn't get that in any of my hearings.

Addressing the point that "online all recordings I can find over alveolo-palatal fricatives sound relatively the same", there are two problems in auditorily distinguishing such sounds. One is a common problem that what you find online is unregulated, and in particular, Wikipedia entries, which anyone can write, can be just plain wrong. The best practice is to rely on more authoritative claims made in professionally-vetted publications, such as the works of Ladefoged, Maddieson, Catford, Esling and other such luminaries. Using such a filter, one can identify Toda as a language (discussed in The sounds of the world's languages as having laminal alveolar, apical post-alveolar, laminal post-alveolar and sub-apical palatal fricatives); they also mention Ubykh as having laminal denti-alveolar, laminal closed post-alveolar, laminal post-alveolar and apical post-alveolar. So the problem may be that someone was simply wrong in assigning a label (because they didn't do a detailed articulatory study).

The other problem is the "sample" problem, which is that you need a large sample in order to perceive "similar yet different". Online materials frequently do not include the dozens of tokens from multiple speakers that would be necessary to learn the difference between [ʃ] and [s̠] or [ŝ]. I find this problem to be especially noticeable with respect to the "ATR" distinction, that you cannot find a sufficiently rich supply of good utterances of Akan, Somali, Nandi and Mongolian (with multiple speakers so you know you're not listening to an individual-speaker property) that allows you to say "these are the same; these are different". The distinctions you are referring to are extremely rare, and finding abundant materials on the acoustics of these consonants will be a challenge.

By those three descriptions Catford (2001) doesn't introduce three articulations but three designations. He only describes one way of articulating [ɕ]. It is how to describe it using existing terminology that is tricky.

Once you get some kind of dorso- or lamino-prepalatal fricative noise into the sound, try to slacken off the prepalatal constriction somewhat. The result should be a lamino-prepalatal fricative [ɕ] or voiced [ʑ]. The same result can be arrived at by starting with a lamino-postalveolar type of [ʃ] and then contriving to get more palatal constriction into it: saying lamino-postalveolar [ʃ] while 'thinking [ç] or [i]'.

This kind of lamino- or dorso-prepalatal fricative is the Polish ś, which is sometimes called, quite reasonably, a 'palatalized [ʃ]'.

Here he is simply saying that you can arrive at [ɕ] by raising the dorsum while producing a postalveolar [ʃ]. As you can see in the illustration on the same page, the constriction of [ɕ] involves both the blade and the anterior part of the dorsum, and some articulations of [ɕ] may involve more the dorsum and others the blade, so neither to say it's laminal or dorsal would be wrong. 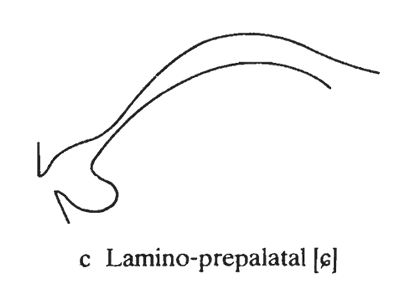 Not the answer you're looking for? Browse other questions tagged phonetics articulation or ask your own question.

0
How many phonetic symbols are in total languages?
5
How are the palatal approximant and palatalization different in Slavic languages?
1
Voiced fricatives are just breathy approximants?
6
How many different vowels are there?
10
Do voiceless approximants exist? What is the consensus among phoneticians/phonologists?
4
How can I learn to produce "harsh voice"
3
Voiceless alveolo-palatal affricate in english?
0
Why there are few aspirated fricatives in the world?