How these close sounds are distinguished in native language

This is not a comprehensive list but just a few snippets from languages that have a few consonants that sound pretty much the same to me. I wanted to ask how I can learn to hear the difference between them. Also, I am interested to know if either (a) it is just an "accent thing", meaning "d" might be pronounced d after some sounds, while pronounced ɖ after others, d̪ after still others, and d̪ʱ after others, but they all mean "d", or (b) these are actually conceptualized as totally distinct sounds.

The main ones are:

I understand the technical pronunciation difference between k and q, but I can't hear a difference, especially if two words were said that mean totally different things but sound roughly the same, like kar vs. qar, I couldn't tell the difference. Wondering if you need to be able to distinguish the two sounds in order to understand the language, or it's more of a context/accent thing (way of pronouncing the "k" sound in a certain context).

In Naxi they have /cʰ/ vs. /tʂʰ/ ch, which both sound the same to me as well. Wondering the same for this, if it's required to distinguish between these two sounds.

In Hindustani they have (ʂ) vs. ʃ, and (ʐ) vs. (ʒ) vs. (ɣ). I can kind of tell the difference between /ʂ/ and /ʃ/, where ʂ is a little deeper sounding. But all of these sound similar to each other roughly.

So basically just wondering if you need to be able to clearly distinguish and pronounce these sound pairs/sets in order to speak and understand the language properly, or really there is just one underlying sound, and multiple ways of producing it (like (ʂ) vs. ʃ). And if it needs to be understood at a deeper level, wondering if you have suggestions on how to do it.

If you mean "what can I do to learn the distinctions", you need repeated and varied exposure to the sounds in question, and you need some method of telling if you're correct in your hearing and pronunciation. For instance, you might learn the difference between [k] and [q] in the context of learning Arabic. In that case, you would be given many words (indeed minimal pairs) involving those sounds, you could be given dictation exercises where you have to write words that you don't know, and your instructor guides you in correct pronunciations. In other words, practice, practice, practice, based on data, data, data.

In the case of normal child language acquisition, this just happens with no instruction. If you grow up in a Lushootseed-speaking environment, you'll speak Lushootseed (or if everybody is speaking related Nuxalk, that's what you'll learn -- their segmental inventories are very similar except apparently for "k"). However, if you try to learn these sounds as an adult, you may never learn them. The extent to which it is mandatory to learn native-like pronunciations is very hard to determine. I do know that you can map Lushootseed consonants onto English consonants (eliminate ejectives, q→k, kʷ→k, x,χ→h, ɬ→ʃ), and the instructor can still understand you. It would be an interesting experiment to reduce all of the clicks of Taa to [k], and get rid of tone, phonatory adornments and nasalization on vowels, to see if you could still be understood (Taa is much less redundant compared to Lushootseed). Some of the distinctions that you mentioned are marginal anyhow, for example k vs q in Uighur. There is a 3-way contrast in Norwegian (dialect 1) between [ʃ, ʂ, ç] which are all pronounced as [ʃ] in dialect 2, and I don't think anyone even notices the neutralization. If the goal is "be minimally comprehensible", you can probably forgo the obscure sounds, but if you aspire to more native control over the sound system, you need practical experience with these sounds.

Unfortunately, once you've gotten control over a certain sound in some language, like palatal [c] in Hungarian, you have to start over when you try to learn Saami, since [c] in Saami is pronounced somewhat differently. Ejectives in Salishan are different from ejectives in Ethiopian Semitic. Then you have to start to acquire various variants of [ʈ,c,q,ħ,ʕ] and so on.

If you have a specific sound that's causing a problem and if you can hack the writing system, you might try forvo.com, where you can find recordings (of varying quality) of words in the language. The North Saami collection is very well done, for example. Their Naxi collection is, shall we say, sparse. I find getting suitable recordings to be the biggest challenge.

I can vouch for Odia and Hindustani that I can clearly distinguish the mentioned sounds while listening and speak them clearly, since they are different sounds.

A good starting point of learning the sounds in the official Indian languages (except those based on Persian scripts) is to know the basis behind the arrangement of their letters in alphabet - Their corresponding sounds.

After the vowels come the consonants, but if you read the chapter on alphabet in any standard book on grammar, they arrange the first 25 sparsha (contact) consonants into a 5×5 grid, then next 4 antahstha (semi-contact) in a line, followed by remaining 4 ushma (warm air) consonants. This is explained in this video on Sanskrit consonants quite well (the same applies to Odia and Hindustani too). Following snippet is taken from the Wiki page on Odia script: 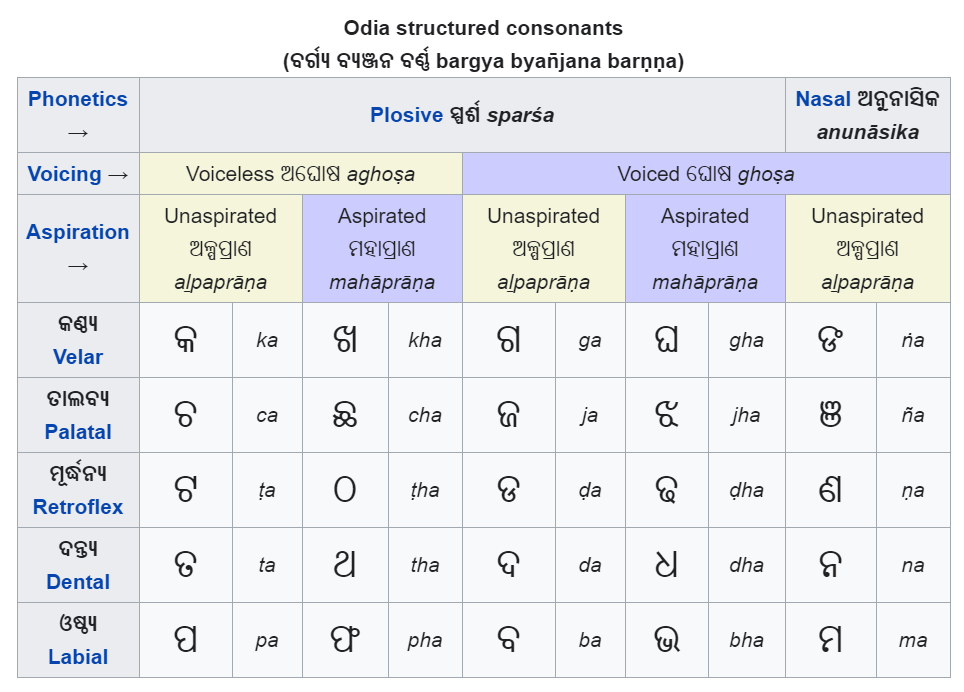 Coming to the problem letters t̪, ʈ, t̪ʰ, ʈʰ, d̪, ɖ, d̪ʱ, these sound graphemes are placed in third and fourth rows, first to fourth columns. The aforementioned video explains that each row indicates the place in the throat at which the tongue comes in contact to produce the said consonants. ʈ, ʈʰ, ɖ, ɖʱ originate in murdha or contact with roof of the mouth, whereas, t̪, t̪ʰ, d̪, d̪ʱ are generated by tongue's contact with danta (teeth). The h in superscript (for letters in 2nd and 4th columns - t̪ʰ, ʈʰ, d̪ʱ, ɖʱ) means the pronunciation is followed by a gust of air. And finally, speaking the letters in 3rd and 4th column - d̪, ɖ, d̪ʱ, ɖʱ is done by making a vibration in throat before the tongue is released to let out the air and pronounce the sound.

I hope this clarifies the sounds for you. Do engage in conversations in the communities speaking the said languages, so that you can hear the sounds (and make out the average sound, this helps in weeding out a few incorrect pronunciations of a few speakers and dialect specific modifications/simplifications). Also, I find technical explanations of sound generation in humans (like the video above) to be very useful.

Not the answer you're looking for? Browse other questions tagged phonology phonetics ipa sound-change or ask your own question.

6
Sounds that are treated as phonetically equivalent
1
The anatomy of the L sound
1
If any of these stranger human voice sounds have IPA annotations
17
Why vowels sound different from each other
0
How linguists determine the sounds a speaker is performing
13
Is the "p" in "spin" really a "b"?
3
Where are these Danish sounds in IPA?
5
Is it possible to have the same symbol for different sounds in IPA?