Does anybody know how the following numerals had been used and provide some examples? 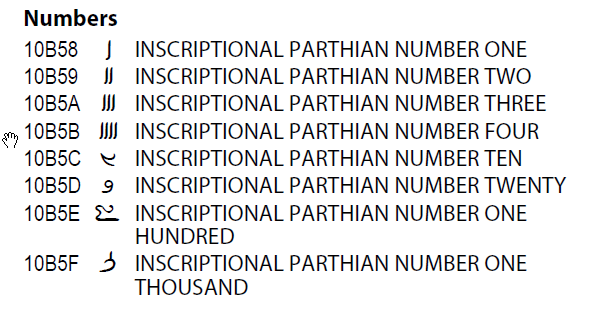 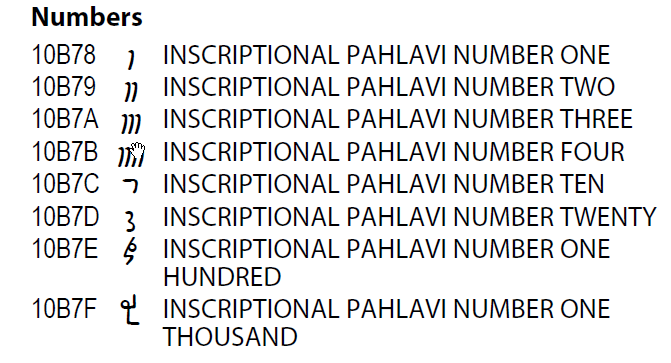 They are related scripts historically used for related languages, which also used other writing systems.

Both used the levantine number system, described in detail in the fantastic book/thesis by Chrisomalis Alex B. recommends in the comments above. To say it (very) crudely, it looks like a mixture of Roman numbers with some base 20 under 100, and “number as spoken” above 100.

Since your source is Unicode codecharts, you can check what the Unicode standard says about them. The relevant section of chapter 10 (pdf) sends back to table 10-3, which contains lots of examples in the related imperial Aramaic script system. A more detailed source of information is, as usual the proposal to encode the the script in Unicode (pdf): it contains lot's of examples of numbers explaining the details of encoding, as well as some actual historical documents using them (figures 7 and 12.)

Let us see ho it works encoding the number 2905 (this question number) in an ASCIIfied, left-to-right version of this number system, where

1 to 4 encoded as repetition of I

Note that, according to the proposal, several decomposition are attested for 5 (IIII I or III II), 6 (III III or I II III) and 7 (I III III or III IIII).

Not the answer you're looking for? Browse other questions tagged numbers or ask your own question.

9
Is there a term in linguistics for underdeveloped number systems?
1
How are numerals written in Arabic?
3
Is it possible that a language's number system is inherently wrong?
1
What did Proto-Indo-Europeans use words for numbers up to 100 for?