The course I'm taking is based on Radford's Analysing English Sentences (2009). I'm having a lot of trouble analysing sentences within the split VP framework. There are very few examples in the book (and on the Internet). I'm not sure I'm doing right. I decided to start with very basic sentences. How would you analyse the following sentences?

The definition of "ergative" verbs in my book reads: This term originally applied to languages like Basque in which the complement of a transitive verb and the subject of an intransitive verb are assigned the same morphological case. However, by extension, it has come to be used to denote verbs like "break" which occur in structures like "Someone broke the window" and in structures like "The window broke", where "the window" seems to play the same semantic/thematic role in both types of sentences, in spite of being the complement of "broke" in one sentence and the subject of "broke" in the other.

Note above that the object agreement in the transitive verb is the same as the same as the subject agreement in the intransitive verb, namely e. This makes it ergative. In contrast, look at the English pronouns. The two third person subject pronouns are the same, but the object pronoun is different. This means that case in English is patterning accusatively.

In English its hard to talk about unaccusativity and unegativity because we don't have the best diagnostics. Other languages, do though. A classic case is perfect forms of intransitives in Italian. Different intransitive verbs take different forms of the copula.

As for drawing trees. People usually assume that it's the unaccusative subjects that are treated differently. In a derivational theory, they are assumed to start out as objects to the intransitive verb, which then move to subject position. One piece of evidence for this, looking back at Italian, is that the passive form of the transitive verbs use the È you see with unaccusatives. In derivational theories of the passive, the subject starts out in object position and only moves to subject position later.

È stato ucciso.
He was killed.

So long story short, your example (4) is a normal transitive clause. It has no bearing on unaccusativity or unergativity. You examples (1) and (3) are unaccusative, but to convince me you would need to give me some diagnostics. Once you have those, you could try to argue that the subjects of (1) and (3) are underlying objects. (2) might in fact be unergative. Once again, marshall some arguments. If it turns out to behave differently than other patient-y intransitive subejects, you might be able to argue that these subjects originate in subject position or something.

Posting a picture from Adger 2003 now - will write a full answer a bit later. 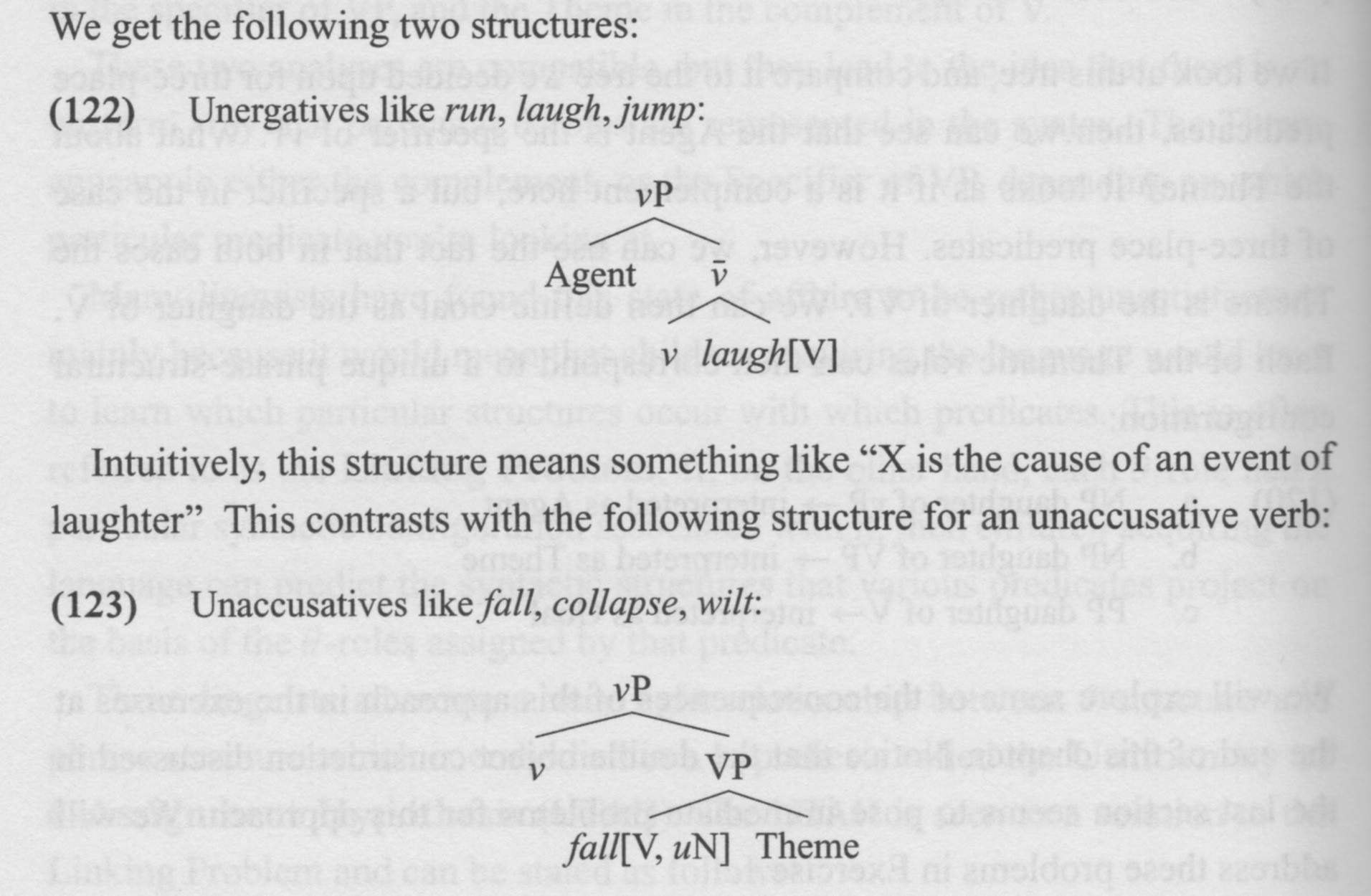 Not the answer you're looking for? Browse other questions tagged syntax-trees or ask your own question.