"An apple that my mother bought yesterday"

Thank you so much

English has two distinct meanings of "that", with different syntax. So for syntactic purposes I find it easiest to think of them as coincidental homophones (they just happen to look like each other by random chance), even though that's not historically true.

The first version, as you mention, is a complementizer. It takes a full sentence (a TP or an IP or an S or something else depending on your theory), and turns it into a complement for a verb, as in "I know that penguins are good". 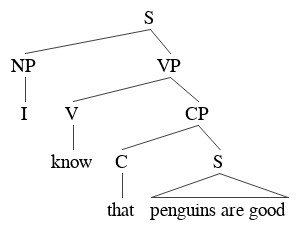 The second version is a pronoun, as in "I see that".

The way a sentence like yours is generally analyzed, it has an "invisible complementizer" (shown with ∅ here), and the relative pronoun starts out exactly where you'd expect a normal pronoun to go: 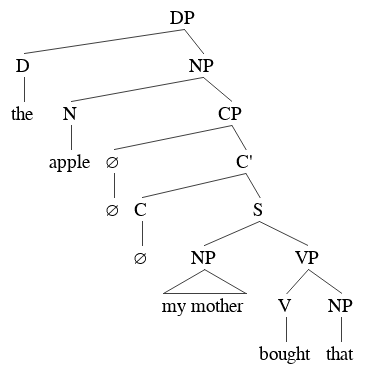 Then "that" moves up to a position right under the CP: 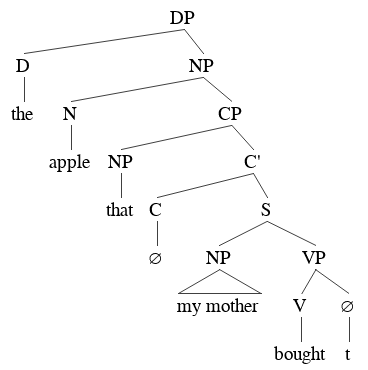 This movement is very similar to what's seen in WH-questions ("I wonder which apple my mother bought"), so the two are usually analyzed as being different forms of the same phenomenon. If you want to learn more, look into the term "WH-movement".

Note: Originally, OP's question was "Does NP -> NP CP exist? Can a noun phrase immediately dominate both another noun phrase and a complementiser phrase?" The following consitutes an answer to this question, so I'll leave it here even after the question having been edited.

What about something like the claim that the accusations were wrong?
Here, that is a complementizer that takes a full sentence, and not just a relative pronoun that enters the C position through wh movement, as in your apples example. 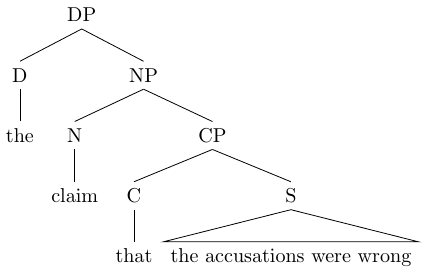 4
Is there a term for "the number of words that must follow a given word to complete a phrase"?
1
Classification of Relative Clauses in English
0
Help with an ambiguous English syntax tree (studying for a final)
3
How to Handle Conjunctions in Generative Syntax Tree without Abandoning Nontangling Condition
1
Complex Sentence
1
Is "Since + clause" a noun clause or adverbial clause in this phrase?
0
Can adjuncts modify nouns?