Why did Grice claim that the implicature is not “a part of what is said”? 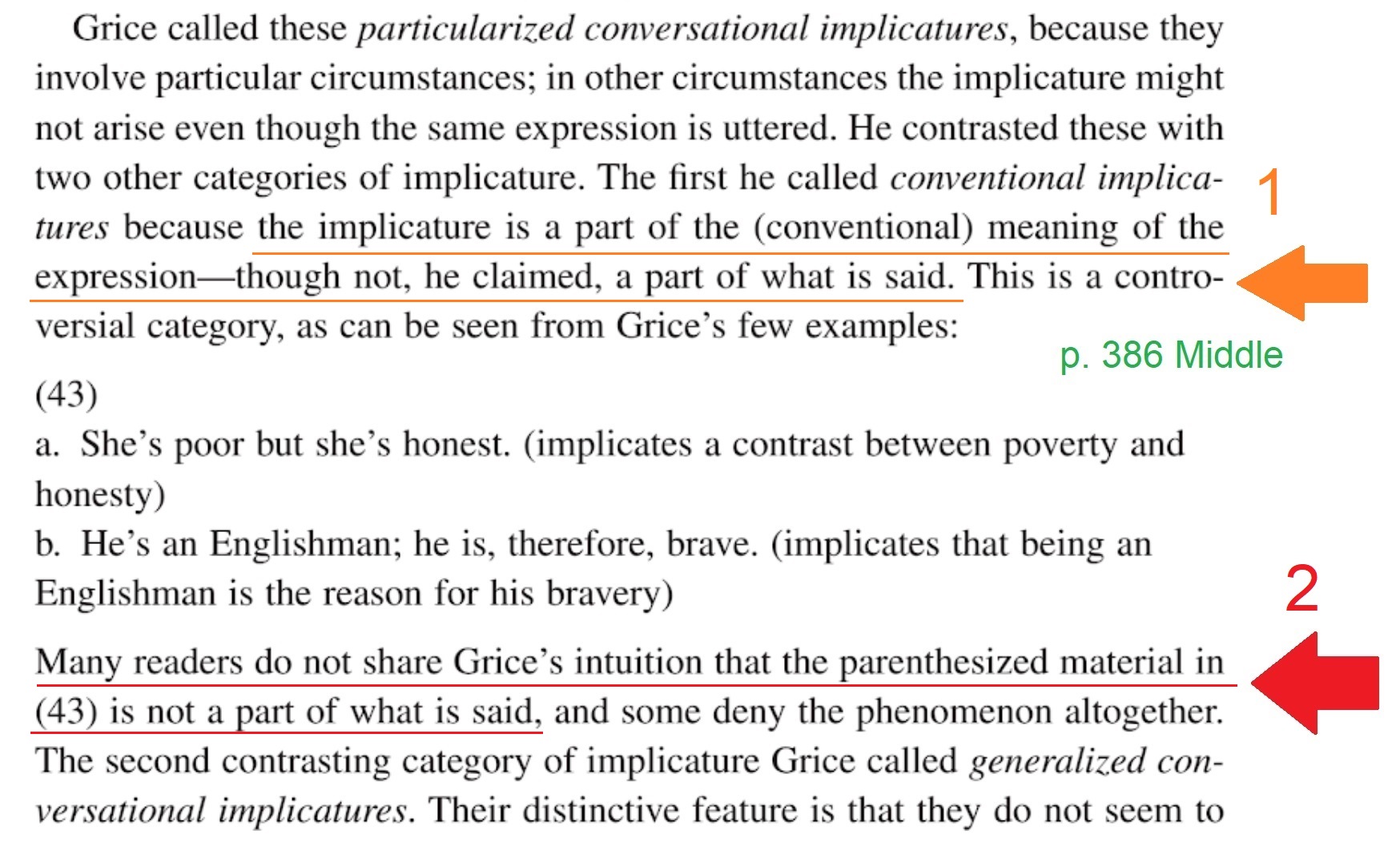 Grice claims that implicature is separate from what is said, since it can only come from a surrounding context: sarcasm, for example, can't be understood in a vacuum. Others say that the dichotomy between "what is said" and "what is not said" in this case is a false one, since nothing can be understood in a vacuum: there is no "true meaning" of the words outside of how people use them, and all the metaphors and implicatures woven into that.

Grice was writing in the 1950s and '60s and he was a philosopher, not a linguist. Thus his views of "what is said" are not linguistic ones, and indeed they're not all that clear to his readers.

There is, in fact, a problem with talking about "what is said" that emerges as soon as the description goes beyond the sounds uttered, because anything beyond the physical and physiological data require human interpretation, and that varies. Grice's intuition, I think, was that while but is logically equivalent to and, there is something more involved when you say but, and it refers to the emotion associated with the clause introduced by but.

When one says He was a politician, but he was honest, one signals some surprise, as if that combination of propositions were not something one would expect. However, it's not part of the logical meaning, because whatever that "something more involved" is when we say but, it has no effect on the truth of the two propositions. That is, in both

it is true that that company makes bagels, and that the bagels are not kosher. That is to say, logically they are identical. The difference is the presupposition, which accompanies but, to the effect that bagels are, or ought to be, or are expected to be, kosher.

In the decades following Grice, the concept of Presupposition has emerged to deal with the problems of but, as well as a host of other semantic/pragmatic problems. Presuppositions are considered to be a part of pragmatics, while logic is considered semantics.

In philosophy, "semantics" is usually limited to logic; hence the motto Semantics underspecifies, which refers to all the things that logic doesn't deal with.

If you use a "logical" definition of but and therefore, the sentences could be true even if the "conventional implicatures" were false.

Likewise, in classical logic, a word like "therefore" would traditionally be understood as indicating a "material conditional", which as the linked Wikipedia says does not require any causal relationship.

If we consider "what is said" to refer only to the logical statements that are communicated by an utterance, then the contrast between poverty and honesty, and the idea that being an Englishman causally contributes to bravery, is not part of "what is said" in the quoted example sentences.

But it seems a bit dubious to assume that the underlying structure of English grammar is built on the same principles as classical logic. I assume this is why some people disagree with this distinction between what is said and what is implicated in sentences like these. I don't know how Grice "rebuffed" counterarguments.

Not the answer you're looking for? Browse other questions tagged pragmatics or ask your own question.

3
What is the name of the type of sentences that describe an action that is realized by saying the sentence?
4
What is the difference between implicature and entailment?
2
What calls the phenomenon that the sounds of two synonyms mix together and form an expression with the same meaning?
0
Explain the meaning of "metapragmatics" to a 14 y.o.?