Which modern IE language is most conservative in noun inflection and in this aspect is most similar language to PIE?

A simply approach to the question is to find which language (if any one language can be determined) has the most similar noun paradigm to PIE. The phonology of the suffixes can also be concidered.

The PIE noun paradigm inflects nouns based on case, number, and gender.

These nouns were also grouped into 5 declensions based on the vowel stem.

Here is a comparison of a few candidates:

Getting closer, but still no good match.

From this (and other languages I checked out) I would conclude that the modern language closest in noun inflection to PIE is either Slovenian or Lithuanian/Latvian.

Here is a comparison of the actual forms that the cases take, for the masculine noun *wĺ̥kʷos (“wolf”) 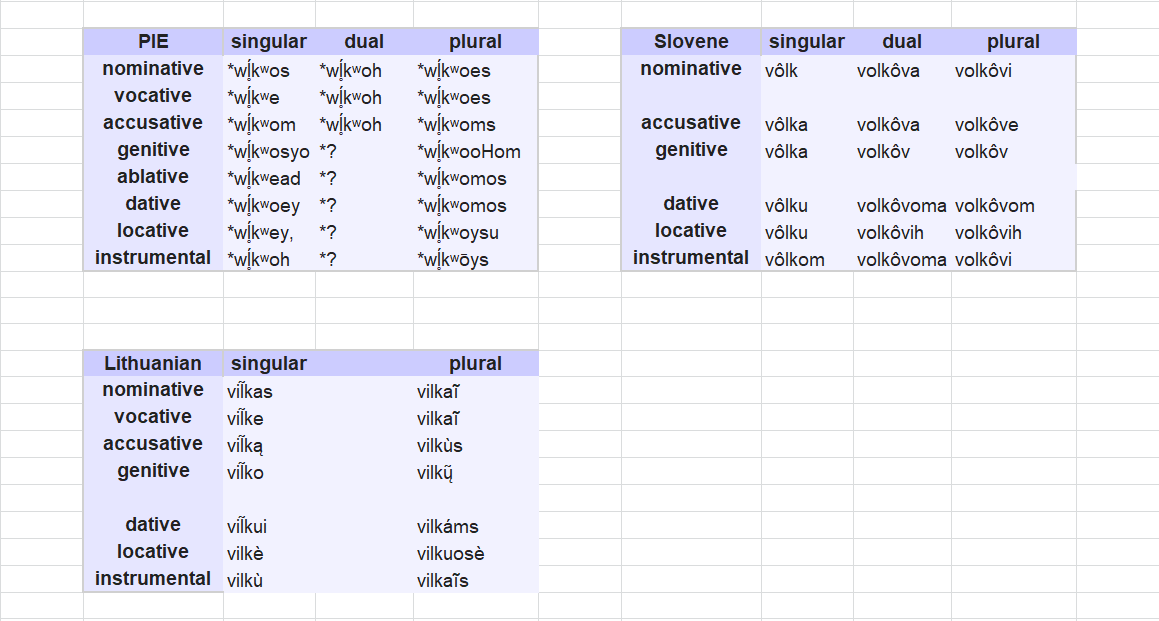 Lithuanian seems to match more closely, despite the lack of the dual. That and its declension system, almost identical cases, extant vocative, use of the dual as recently as the 19th century seem to trump Slovene's more closely matching gender and number paradigms.

3
What caused some IE languages to have consonant inventory sizes different from PIE?
7
How does PIE *kʷ in **wĺ̥kʷos change to PGmc. *f in *wulfaz?
3
Solution to a typological problem about PIE phonology: are there any facts that contradict this view?
2
PIE root ked- : 'To go, yield'
4
Which language has the most types of irrealis moods?
8
Which Indo European language best preserves the features of Proto Indo-European?
14
Are there any languages which inflect the noun for morphosyntactic categories normally reserved for verbs (e.g. tense, aspect, etc.)?
0
Is it possible to have a word-based language completely without word inflection?