What might account for different numbers of formants in plots of male and female speakers pronouncing the same vowel?

I have been looking at a Thai vowel in Praat.

I have several exponents from native speakers, though only one of them is male.

The female plots all show four formants. The male plot shows five formants, but F2 and F3 are quite close together (1580Hz and 1820Hz). Image files of the male plot and a typical female plot are attached.

When I try to approximate the vowel myself, my own (male) plot also shows five formants.

If I take the native speaker plots at face value, the male F3 seems far far too low - but if either F3 or F2 is just ignored, the plot does look like the female plots.

Is that a plausible interpretation, and is there a better one? 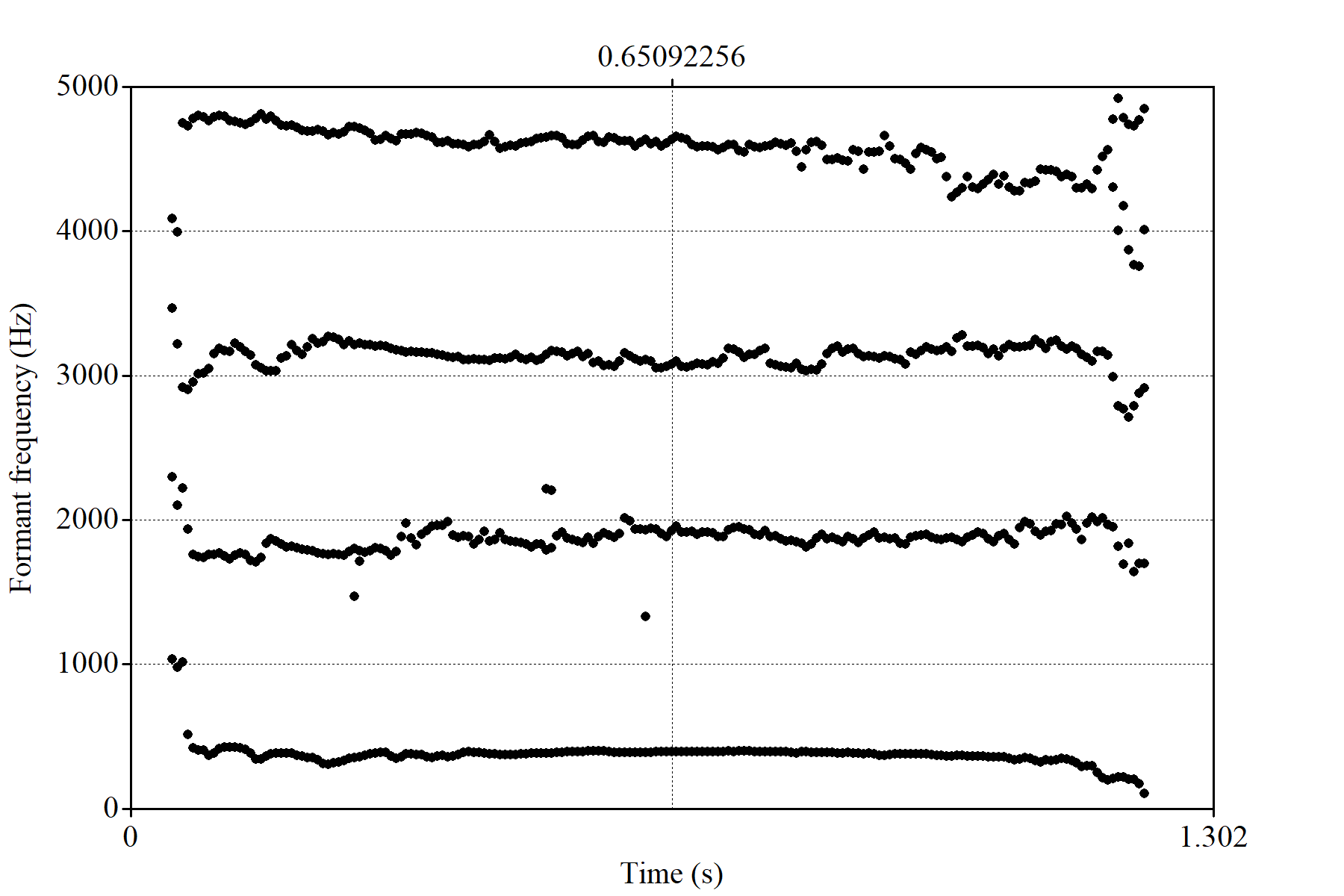 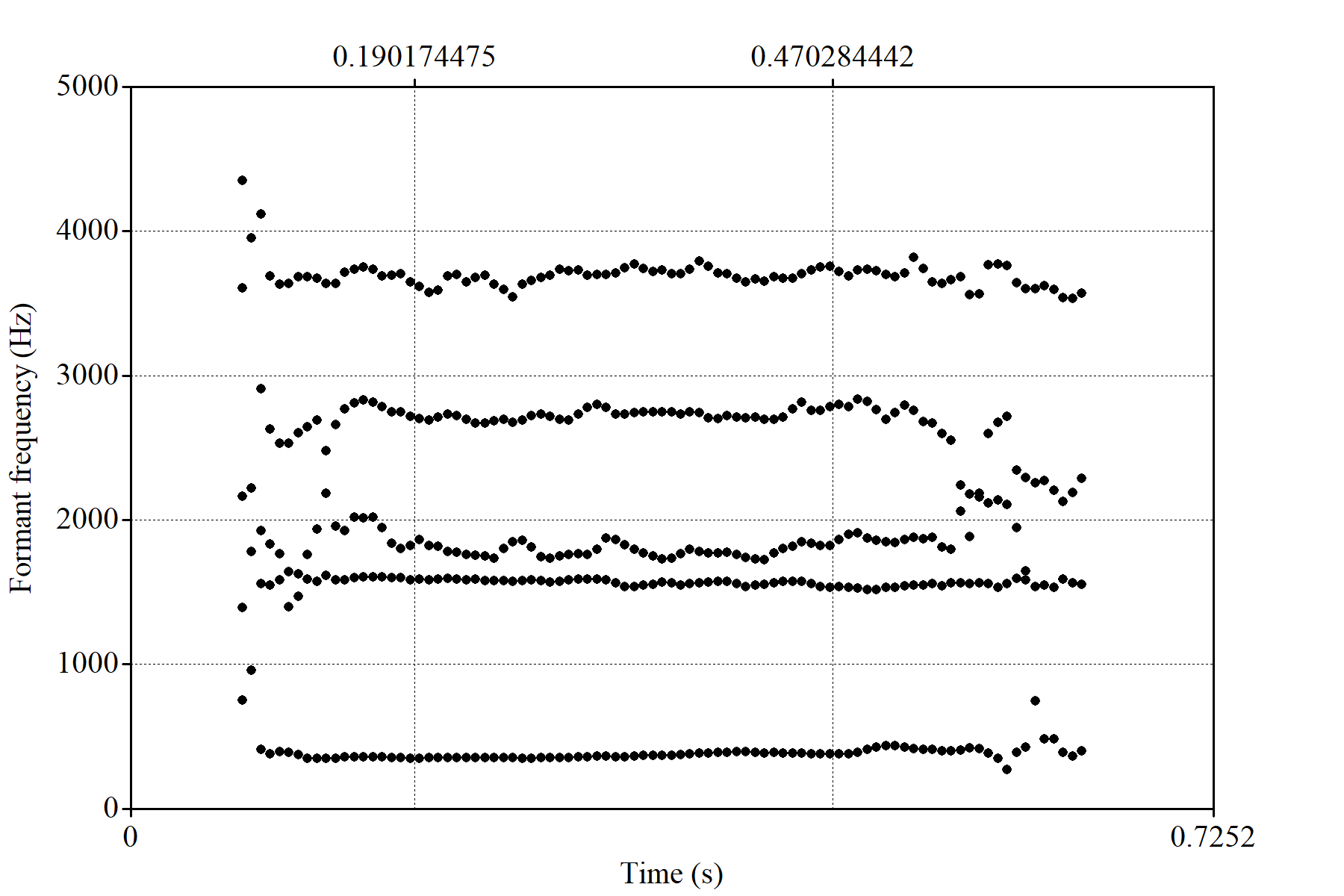 The traditional account is that formants frequencies are based on tube length, with resonances being at those frequencies corresponding to 4L, 4/3L, 4/5L, 4/7L... Formants shift up or down as the tube is shortened or lengthened. (Adding a constriction for [i] vs [a], for example, gives you the complex F1,F2 pattern that we pay attention to: for the moment, just assume an open tube). A person with a shorter tube length is predicted to have higher, more closely spaced formants than a person with a longer tube.

Tube length is the distance from the lips to the glottis, and females typically have almost 3 cm shorter tubes. This also does not include the length differences that arise from raising and lowering the larynx. Vertical displacement of the larynx is known to be connected to phonatory differences in vowels as well as F0 control, and Thai has a complex interaction between F0 and phonation in its tone system. Now the question that needs to be addressed is what the sociophonetics of male vs. female speech is in Thai: it would not be surprising if there is a sociolinguistic "lengthening" effect in male speech and a "shortening" effect in female speech.

If we take the above formant tracks at face value, there is a mystery that the 4th and 5th formant frequency of these examples diverge quite substantially. The bottom picture (which I take to from be a male speaker) shows a 5th formant at around 3750 Hz, which is surprising since that is in the neighborhood of a predicted 4th formant. The top picture only shows 4 formants, F4 being at around 4750, which is not inconceivable for a short-tubed speaker.

The problem with the proposed interpretation is that there's no mechanism whereby female speakers can manage to align F2 and F3 perfectly. An alternative to consider is that this is a formant-tracking problem, and that F2 and F3 are not so closely spaced. LPC analysis is really great when it works, but there can be problems (read this, and this which is a fairly technical read). Automated LPC coding makes sometimes invalid assumptions about bandwidth and acoustic zeros which can arise with distinctive phonation, as arises especially in SE Asian languages. Nasalization also opens a side-branch which contributes anti-resonances, so there might be a phonetic nasalization difference (not a contrastve property of Thai, but something that might characterize an individual's speech). The old-fashioned way of measuring formants is to look at a spectrogram: the dark patches and the red dots don't match, there's your problem. Increasing the number of formants (number of LPC coefficients) from 5 to 6 may also remove problems.

If you can put the wav file up somewhere, a more detailed diagnosis might be possible.

3
Getting familiar with accents
8
Is Thai a stress- or syllable-timed language, and does it matter?
7
Can a vowel and a consonant be allophones of the same phoneme?
6
What is the phonetic and phonemic destinction between a semivowel and a vowel?
0
Do the DRESS vowel (/e/) and SQUARE vowel (/ɛː/) have the same vowel quality in contemporary RP?
0
Why is the vowel speech sound (called “ash”) in “Tank” and “Cat” considered the same?
0
Confounding factors in the perception of foreign vowel sounds