I am currently writing my master thesis about extracting "ideas" for innovation from text stored digitally. Thus the project is a combination of "Marketing", "Datamining/statistics" and "Linguistics". I am a marketing student and the last english class I had was 6-7 years ago.

I have come so far that I need to understand what "semantics" (having updated this I am not so sure anymore, but I leave I for now) are related to discussions about ideas. To give a couple of examples of what I mean one could write the following idea in a forum:

I came up with an idea of how to build a car that is fueled by water.

Yesterday I came up with a cool idea about how to create a cure for cancer.

My point of showing these two example is that if I was to run some statistical analysis on these two examples, the nouns "car", "car", "water", "cure" and "cancer" does not really contribute to whether a sentence contains what I am looking for. So I might as well throw these out. However the phrase "came up with" does provide a lot of information as this is one way to express that one have an idea.

One could imagine several variations of these examples but my point is that basically one should be able to remove nouns as they should not make a difference in theory. Even the word "idea" which is also a noun one should be able to remove, but maybe one need to distinguis between nouns that is often connected to discussions about ideas and nouns in general. For example the nouns "idea", "innovation", "design" and "model" might be nouns that in some degree might show up when people discuss ideas.

To give an example of why I started searching this way I have already build a model (via SVM) based on n-grams. When one create the model one obtains the weights of a given term or n-gram that contributes. When looking through that list, n-grams like "that would", "that sounds cool", "i have" and/or "i had an" tend to weight highly, getting me to think that dividing the text into ngrams/chunks is a part of how one should model this.

So the following phrases/n-grams are likely to have positive weights:

One could also imagine that the verb "invent" would also have positive weights.

Finally the nouns "idea" and "innovation" are also likely to have positive weights, but the term chocolate is not as it only tells us what domain of ideas we are dealing with.

The case is that I was handed over 300 classified posts from a userforum where three judges had classified the posts. The posts was classified as containing an idea(1) or not (0) and if at least two of the judges agreed that there was an idea in the text I would use it as a positive case. This gives me 12 positive cases and 288 negative cases, which is of course a very bad training set far to small and unbalanced to do anything proper with. Then the thought was to use this small bad training sample to create a preliminary filter that can be used to extract around 3000 posts from the original forum with a higher likelihood of containing an idea. What I am doing now is that I am trying to optimize the preliminary filter to get a good training set for the final model.

I am writing this here because I do not have a clue about how to attack this problem. I know how to setup a computer to do what I want it to, but I dont know how to work with language in a structured way. Therefore I hope that someone in here could throw me a couple of keywords and maybe even sources that I can look at myself in order to figure out how to structure my problem better. I would also be nice just to have someone to debate this with as I am totally on my own.

Your question sounds simple, but it unveils an entire area of human activity, a Natural Language Processing.

The problem is that natural languages convey the content in a linked manner. It means that a phrase "build a car fueled by water" can't stand alone. Instead, it is bound to various objects, like this: I (came up with (an idea of (how (to build a car (that is fueled by water))))). An actor, "I" is linked to an idea ("a car that is...") through a hierarchy of relations, or links. Hence, your data mining system has to follow the entire sequence, otherwise it would be quickly confused with phrases like this:

I have no clue how to build a car that is fueled by water.

As you see, the actor and the idea are essentially the same, but the linkage between them indicates the whole opposite message.

I don't think that inventing a car that is fueled by water is a total nonsense.

Although a naive algorithm will find negative words ("nonsense", "I don't think"), the entire message conveys a positive idea.

Finally, you will end up with a semantic graph, like this: 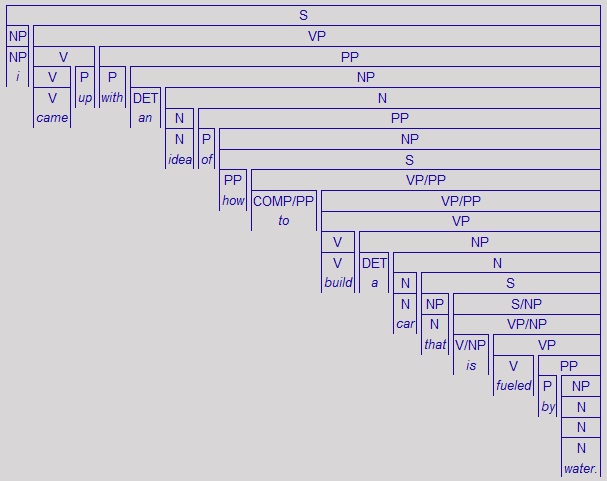 (image produced by the interface that provides online access to the LinGO English Resource Grammar).

You may have notice that most common phrases have various ways to be parsed into a semantic graph. You have to use some algorithms figuring out the most probable variant.

Please don't be discouraged by the complexity; it's not that terrible. :) For most practical tasks, you don't have to get into the full depth of analysis. However, knowing theoretical key points will let you focus your attention on practical implementation.

Also, I would suggest attending some courses that can provide you with some basis. For instance, Coursera has free course of NLP, and they also have a series of videos that may be useful.

From the description of your task, I get the impression that you do not really need semantics of any kind — you intend to discard many segments of a sentence. I believe that you'd be better off looking at the chunkers listed here.

I haven't worked with any of these tools, myself. So I can't tell you which ones require you to write software. I understand that you are a student of marketing. I don't know how comfortable you'd be with writing code. But if you have to write code, I think writing Python (for NLTK) should be less of a hair-pulling experience for you, than writing Java for one of the Java-based tools could be.

Not the answer you're looking for? Browse other questions tagged semantics nlp or ask your own question.

4
The "affectee-subject HAVE" construction in English
5
Detecting actions within text
3
Can we parse the hell out of this construction?
3
Compositional Semantics of relative clauses
5
Is there a linguistic term for “grammatically well-formed word salad”?
0
Materialization of nouns by adjectives