Is it possible for a DP like "three times" to act as an AdvP ("He read the book three times.")? How would such a constituency tree look like? How does the DP modify the verb? Conversely, would the same thing apply to constructions in Dutch such as "twee keer"?

Is it possible for a DP like "three times" to act as an AdvP ("He read the book three times.")?

The DP loosely "acts as an AdvP" in the sense that it's modifying the VP, but that isn't because it's actually acting as an AdvP. It's because AdvP and DP can both adjoin to a verb to modify it according to the semantic function they carry. When you adjoin a DP, it doesn't become an AdvP, or act as one; it just becomes an adjunct and acts as one.

If you consider PP adjuncts—which you probably already know about—it's exactly the same thing. A PP doesn't become an AdvP when it's an adjunct instead of an argument. Neither does a DP.

That depends on your favorite theoretical analysis of adjuncts. Presumably you're looking for an MP analysis, given that you're asking about DP rather than NP. But whatever you like, draw your favorite version of the tree for "He read the book repeatedly", then just sub the DP in for the AdvP, and you're done.

For example (ignoring whatever is above the VP, and whether it has anything in spec), if you analyze [VP^ read the book [AdvP^ repeatedly]] like this: 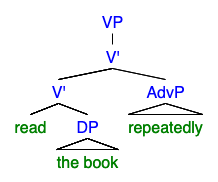 … then you analyze [VP^ read the book [DP^ three times]] like this: 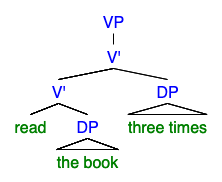 Conversely, would the same thing apply to constructions in Dutch such as "twee keer"?

I don't know Dutch, but if this is a valid sentence (Google seems to think it is):

… then yes, the VP is presumably structured the same way: [DP het book] is the complement of the verb, and [DP drie keer] an adjunct.

In fact, you can go way beyond close relatives to English and find DP adjuncts as frequency modifiers. (That's what makes people think that adjunction is part of Universal Grammar in the first place.) For example, in Japanese:

The [DP san-kai] doesn't take the -ku ending (sort of similar to English -ly, but fully regular and productive) that an adjective/adverb would take here, so it clearly isn't an AdvP, but it is adjoining and modifying the same way.

Not the answer you're looking for? Browse other questions tagged english syntax-trees generative-grammar x-bar-theory dutch or ask your own question.

5
Syntax trees for unaccusatives, unergatives and ergatives verbs (MP) within the split VP framework
16
What are the chief advantages & disadvantages of describing sentences with dependency vs. phrase structure trees?
3
What aspect or feature do “over TIME” constructions have?
2
How to apply x-bar structure to split verb phrases?
1
Syntax trees and comparatives? Maybe adjuncts?
3
Is there a grammar of syntax that takes into account inherent syntactic ambiguity in natural languages?
1
Help with constituency?
3
How order of the syntax tree is formally/strictly proven?
4
NP or DP for “that book”