In biology, ring species is a population of subspecies in a geographically ring-shaped region, where individuals are close (in terms of interbreeding) if they live close to each other, but between the two "ends" they don't get along. Below is the distribution map of birds Phylloscopus trochiloides, where western subspecies (blue) and eastern subspecies (red) went too diverse to interbreed. 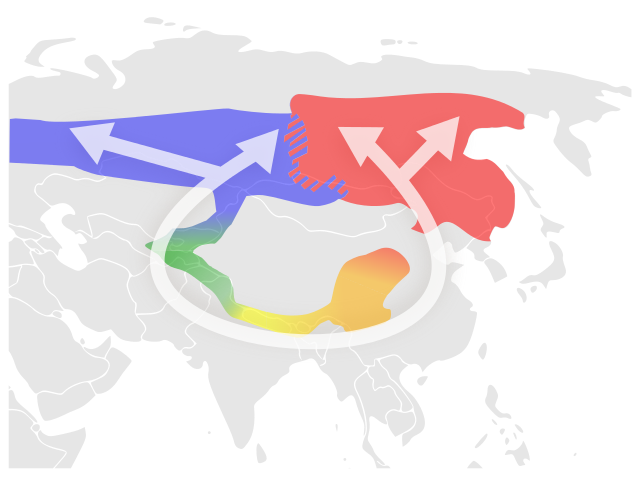 The obvious linguistic equivalent should be dialect continuum, a population of language(s) with spectrum of mutual intelligibility. But for the "ring" part, it should be a ring-shaped region where the speakers from both "ends" don't understand each other even though they are geographically close each other. Is there such one?

I don't think there are any ring languages, and I can explain why it's unlikely.

One big difference is that there just aren't nearly as many living languages as there are extant biological species, by orders of magnitude. Since the classic example of ring species is the Larus herring gulls, let's look at them as an example. There are many Arctic bird species. A few of them cover the whole circle. Of those, one, the Larus gulls, form at ring species. By contrast, there are only a handful of Arctic languages, and the widest-distributed small family is Eskimo-Aleut, which doesn't go any farther than from the Russian Aleutian Islands to eastern Greenland. So there's no opportunity for a ring language to form.

So, the most widespread language family around the Arctic ends up being Eskimo-Aleut, which only goes from the Russian Aleutian Islands to eastern Greenland. (In Siberia, where there's more competition, the continuua are much narrower than that.)

There are places where you can find smaller rings of species, like your Himalayan example, but the same factors, and others, make it less likely to find rings of dialects.

Let's look at an example that superficially looks promising: Scandinavia. Finnmark Nordnorsk and Far Norrlander Swedish dialects are not mutually intelligible. But there is a chain of pairwise-intelligible Norwegian dialects all the way down and around the coast of Norway, and a chain of mutually-intelligible Swedish dialects all the way down the coast of Sweden. At the bottom, the southern varieties of Standard Norwegian are pretty close in intelligibility to Scanian Swedish, to the point where (if you wanted to annoy a lot of people) you could almost claim they were dialects of Danish.

But as soon as you look beyond the coasts, you'll see that the traditional inland northern Swedish and Norwegian dialects share features with each other. When species send out branches into thinly-populated areas, they tend to lose contact and diverge, but when languages do, they're carried by people who move back and forth.

Also, there's a constant pull on both dialects by their respective standard varieties—especially strong in recent times—which is part of the reason they're as divergent as they are.

Also, some of the Finnmark dialects aren't divergent just because Nordnorsk speakers keep moving farther north; much of the change comes from other people (mostly Sami) learning Norwegian as a second language, a kind of "horizontal transmission" that you don't see in higher animals in biology.

So, a ring seems likely to form only if the center of the ring really is nearly uninhabitable, if the language doesn't have writing and mass media, and if there's nobody else in the way.

Such a situation could arise somewhere in, say, the highland Trans New Guinean languages. But it would happen a lot less often than with biological species. And, even if it did, there's a good chance we'd never find out—the only way we could detect a highland TNG ring would be if we discovered and classified all of the languages before contact changed the map.

Abarnert laid out quite nicely the reasons why this doesn't really happen. But you do sometimes get "rings": they're just a whole lot smaller and form for different reasons.

In northern Iberia, for example, the local Romance languages form a naturally-evolved dialect continuum from east to west. But in the south, there are hard boundaries between them. This could be seen as a very small ring.

The reason for this is politics rather than evolution, though. The southern Romance dialects (like Mozarabic) got displaced by Arabic during the conquest of al-'Andalus, and then Arabic was displaced by Romance again in the Reconquista. But by that point each of the Christian kingdoms had a national language, and the hard political boundaries between them didn't allow the natural dialect continua that formed in the north.

Possible, yes, but I don't know an example. But the following comes pretty close to it:

The Slavonic languages on the Balkans form a somewhat broken ring, almost encircling the Hungarian and Romanian language area: Going counterclockwise from Ukrainian via Ruthenian and Slovak to (first gap in the ring) Slovene, Croatian, Serbian, Macedonian and Bulgarian there is a dialect continuum. Between Bulgarian and Ukrainian is the second gap in the ring, when it were closed along the Black sea coast, Bulgarian and Ukrainian would exhibit a hard language boundary.

I find dutch-german to be a single ring language:

As a dutch speaker i can easily communicate with speakers of low german. Higher german is more difficult. Austrian german yet more so. But when i speak to a swiss german, we cannot understand one another at all. Yet the swiss german can be understood by an austrian german.

Not the answer you're looking for? Browse other questions tagged comparative-linguistics dialects dialect-mapping or ask your own question.

5
Is there a convenient tool for drawing (dialect) maps?
3
What are the most specific features of Tuscan dialect of Italian?
12
Is there any evidence that modern telecommunication slows dialect differentiation?
1
Is there such a thing as a "neutral dialect"?
11
Can the "dialect continuum" phenomenon be recognized from Rome to Lisbon?
3
Is there a term when two words have swapped definitions in one language or dialect compared to another?
6
What's the longest extant dialect continuum?
4
Difference between dialect levelling and pidgin formation?