Why does schwa have a special place among vowels?

What makes schwa so special? On my phonology exam my tutor phrased the question something like: Why is schwa the ruler/king of vowels? I don't know what he meant by this but I suppose it's got something to do with the fact that all vowels tend to reduce to schwa before they disappear... What are your thoughts on this? How would you answer this question?

This is a framework-dependent question. My guess is that he is referring to the representation of schwa, and the premise that it is "featureally empty". That is, front vowels have a frontness property, back vowels have a backness property, and round vowels have a rounding property. Schwa has none of these. That brings us down to the central unrounded vowels [ɨ ə ɐ] (and some other ancillary letters). The proper treatment of vowel height has been inconclusive, but it seems clear that the first cut is between high and non-high, and the low central vowel can be excluded as having an additional lowering feature. There is a line of reasoning that mid vowels are "more marked" than high vowels which would suggest that really [ɨ] is that special vowel that has no features at all. A typical caveat about "schwa" is that, many times, people use the letter "ə" when the vowel in question is in fact closer to [ɨ]. The claim that strict IPA [ə] is structurally special is untenable, on formal phonological grounds.

One phonetic story is that the formants of the vowel schwa are closest to those predicted for a uniform tube, with no constrictions. A second one is that it is extremely short (though there is a chicken-egg question here whether we call a vowel schwa because it is extremely short, or does being extremely short yield the formant quality associated with schwa?). In English for example it has less than half the duration of stressed [ʌ], and in a number of Austronesian languages (with no length contrast) it is also very short. There are certainly schwa-like vowels that are not highly reduced, what is not clear is whether by professional IPA standards those vowels are [ə] or [ɜ ɘ ɤ ə̹]. You can compare Ladefoged's performance of [ʌ] with his [ə], [ɜ] and [ɘ], and then match those standards against supposed schwa in some other language. I don't know of any IPA doctrine that says that "ə" can only be used for extremely short vowels, but it is a widely reported property attributed to "schwa", presumably based on ignorance of languages where a schwa-like vowel is of equal prominence to other vowels of the language. In the case of non-rhotic pronunciations of "bird", it is generally held by phoneticians that this is [bɜːd], not [bəːd]. I don't have a candidate for long schwa where the quality is IPA [ə] as performed by Ladefoged and others.

The claim that schwa is the king of vowels is a cute metaphor for something, good luck figuring out what. I would say that it is the meekest vowel, if I were inclined to talk that way.

When I pronounce this vowel, I would say it is the only one where there is absolutely no contraction of any muscle (except vibrating vocal chords) or any change in the mouth/throat/larynx/pharynx, and the tongue is simply relaxed. I just open the mouth and it's the sound that comes naturally.

So I suppose it is justified that it has the central place in the IPA diagram. 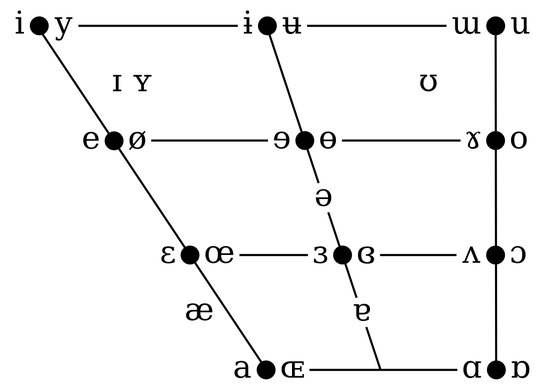 This central place corresponds to the vowel with the least alteration, the softest, the most relaxed: it is the most lenient vowel.

It depends if you're talking about phonology or phonetics.

In articulatory phonetics, "schwa" is often used as the name for the completely relaxed vowel with no particular constriction in the vocal tract. (Whether this actually corresponds to [ə] on the IPA chart is up for debate: the IPA vowel chart predates spectrograms, so it's defined in terms of "what things sound like" rather than formant frequencies we can measure.)

In this case, it's special in that it's the center point that you define all vowels in relation to. /a/ has a lower first formant, while /e/ has a higher second formant, etc.

In phonology, "schwa" is generally used as the name for a reduced vowel of any sort. The name itself comes from the Hebrew marking for an "extra-short" vowel (comparable to Slavic ь and ъ). So the idea that all vowels reduce to a schwa is kind of a tautology. When a mid central vowel isn't just something else reduced, the phonologists tend to give it another name: that's why "butt" is transcribed with /ʌ/ in most English traditions, even though the vowel is not particularly low or back: because it's not a reduction, and therefore can't be "schwa".

Not the answer you're looking for? Browse other questions tagged phonology phonemes or ask your own question.

9
Does English language stand special in terms of phonology?
10
Is the concept of 'long vowel' still relevant in modern English phonology?
0
Phonological vowel length in American English due to (t-)flapping
1
Does lack of a common (morpho-)phonological alternation make a word a lexical exception?
2
"Phonemic" distinctions induced by morphology
6
How dissimilar must case endings be to each other?
3
Why does John Batchelor record these vowels for Ainu?
8
What makes East-Asian languages sound different than European languages?
2
If mora are potentially sufficient to describe language, then what do syllables add, in theory?