Where does supplementation fit in?

As far as I can see, the structure of supplementary constructions like

Karen, being ill, was unable to go

John – her father – was unable to walk her down the aisle

(i.e. compound nouns where the meaning is built up more by addition than modification)

don’t fit very neatly into either dependency or phrase structure theories, because they are not made up of a head plus dependents.

Given that these constructions basically function as appendages, you might say it's appropriate for the framework that describes them to be a theoretical appendage. Still, I was wondering whether there are other theoretical approaches out there that give more attention to this kind of construction, or integrate it better.

Also, is it fair to say that the more pragmatic the language, the greater the use of supplementation?

I agree with BillJ's first two comments: being ill in the first example and her father in the second are integrated well into their clause structures and hence do not qualify as supplements in the intended sense. They are, rather, post-dependents of the preceding noun -- on a dependency grammar analysis. I would analyze the first sentence as follows:

And the second sentence as follows:

The third example is, I think, indeed a challenge to strict head-dependent analyses. Phrase structure has a means of addressing such cases, though. Phrase structures can produce exocentric structures, that is, structures that are headless. Hence I would attempt an analysis of a washer-dryer along the following lines, combining both dependency and phrase structure:

The horizontal connector above washer and dryer links the two words in such a manner that neither is head over the other. In this manner, an exocentric phrase structure is integrated into the greater dependency analysis. The analysis of the fifth example, i.e. paperweight-cum-ashtray could receive a similar analysis. 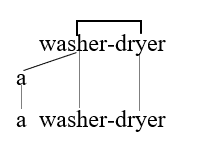 This analysis links the nouns together without viewing the one as head over the other.

In sum, I agree with the underlying sentiment of the question, namely that strict head-dependent analyses are not always possible. My solution to the problem is to acknowledge exocentric phrase structures at times, and then to integrate these exocentric structures into the greater endocentric analyses of sentence (and word) structure.