How to interpret this form of Heaps' Law?

Heaps' Law basically is an empirical function that says the number of distinct words you'll find in a document grows as a function to the length of the document. The equation given in the Wikipedia link is

I'm currently following a course on Youtube called Deep Learning for NLP by Oxford University and DeepMind. There is a slide in a lecture that demonstrates Heaps' Law in a rather different way: 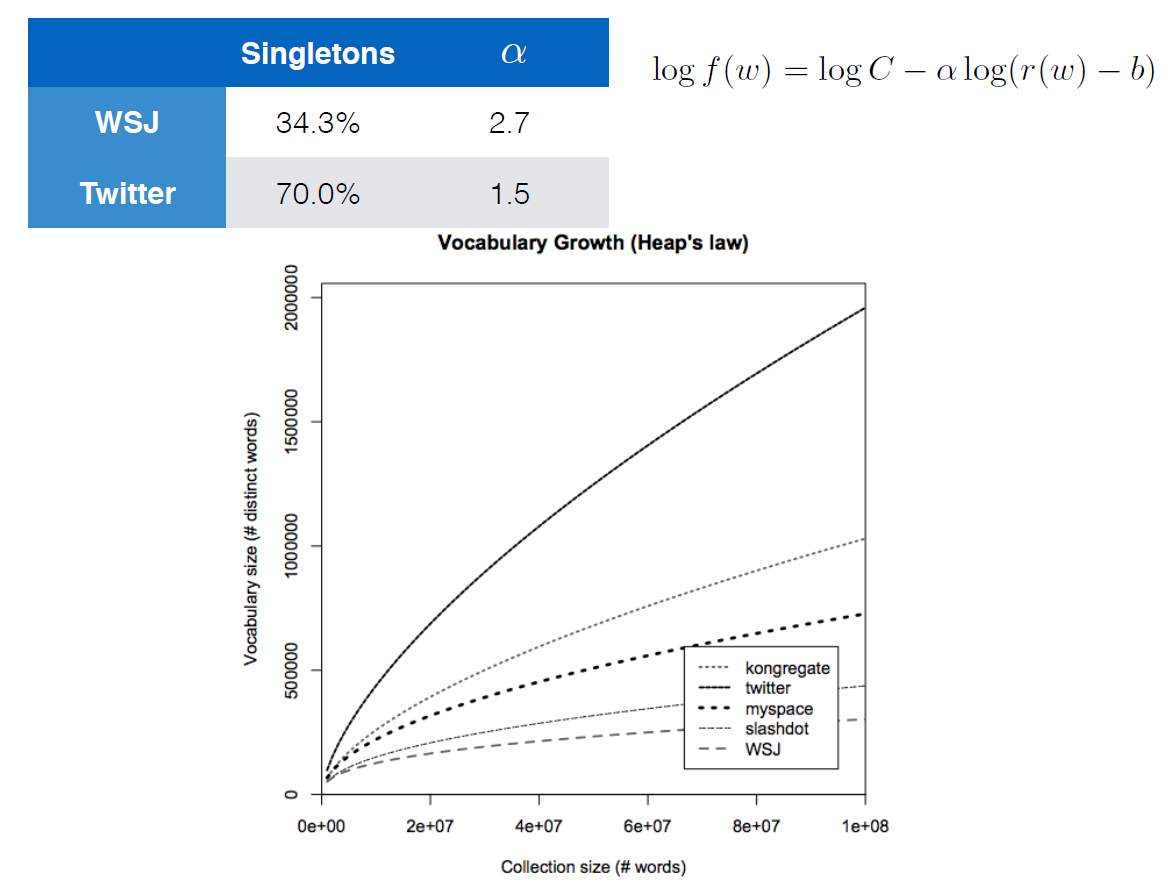 The equation given with the logarithms apparently is also Heaps' Law. The fastest growing curve is a corpus for Twitter data and the slowest is for the Wall Street Journal. Tweets usually have less structure and more spelling errors, etc. compared to the WSJ which would explain the faster-growing curve.

The main question that I had is how Heaps' Law seems to have taken on the form that the author has given? It's a bit of a reach but the author didn't specify what any of these parameters are and I was wondering if anybody might be familiar with Heaps' Law to give me some advise on how to solve my question.

A straightforward rewriting of the Wikipedia formula gives

). The remaining b is a strange additional parameter not present in the original formulation of the law (and irrelevant, too, because the law is about large numbers where n-b is approximately equal to n).

The question is interesting from a (my) novice math perspective.

From a basic linguistic perspective, there is little to no difference between either form. All you need is a slowly decreasing count. Both forms describe standard distributions, a concept that's naturally observed in nature. The specific formula of any such distribution depends on an accurate model. It doesn't hold much explanatory power, if the model isn't empiricly grounded, but it's a heuristic--we might speak of so called fudge factors. For the specifics you should check out datascience.se, or whatever it's called where statistics are treated (compression of text is also rather important in signal processing).

The first formular is akin to the area of a circle

but inverted, i.e. taking the square root (beta=1/2) instead of the square; also, it has a random factor k instead of pi (=3.14...). This can be pictured various ways, for example as light cone projected onto a surface, or a stream of words onto a lexicon: Where the radious of a light cone increases linearly with distance, it's area increases squarely; if this area illuminated a text, the number of new words would increase linearly with distance from the lamp.

This only explains the inversion of the exponantial function, but the fudge factor is another matter, depending on the model. While the factor pi relates the circumference of a circle to its radius, a different factor implies first of all a different shape, either of the light cone, or alternatively of the surface (left as exercise to the reader to the reader), but it still grows linearly with distance. So it doesn't even make a difference in my simplistical model.

In other words, if counting text length in number of words n, so the text grows linearly with each word, it should grow squarely if counting each newly introduced word.

Or vice-versa as the formular has it: The number of new words grows proportional to the square root of the number of total words.

The second formular is essentially the same. I too have no idea what the extra variables are. Removing the logarithm and transposing, we see

There are a few notable differences. What's with those parameters? I'd assume the following:

that's the major difference in any case.

Another difference would be to focus on the transposed form.

The last one is crucial. Raising to a negative power of alpha (=reciproke of the power of alpha) is not quite the same as taking the square root (power of 0.5). But it is similar in effect because the ranges of the exponents are also different than in the first formular; here we have b < 1 < alpha. The very important difference is that the number of new words will tend to zero as the number of typed words tends to infinity. In contrast, the old formula would require ever new words to grow the text.

Somehow I'm trying to see 1/f as a derivative, compared to mechanical accelleration. But I'll rather leave the rest of the exercise to the reader. Please add a link to the video to your question. thx bye

Not the answer you're looking for? Browse other questions tagged computational-linguistics corpora quantitative-linguistics or ask your own question.

14
Are there natural languages that do not obey Zipf's law?
4
Calculating writing system efficiency with respect to reading ambiguity?
3
How to interpret the dependency parse tree of an English Slot Grammar?
3
How to proceed with this Maasai translation?
0
The determiner "a" in lambda form
6
How can I know if a log-likelihood score is high enough?
6
How to make a Corpus? (selecting a good structure)
1
how to interpret probabilities of sequences given by ngram language modelling?
0
Can someone explain to me the Zipf–Mandelbrot law?