I learned basic Tibetan alphabet prior to visiting Tibet, just to realize I know only some of the characters used in practice (because of a lot of Sanskrit transcriptions that go beyond basic Tibetan).

I am working on a translation table between Devanagari, Uchen and Lantsa scripts, but I am not a linguist. Could someone check what I am doing and maybe point me towards resources that would let me complete this work without major blunders?

I am confused by the different forms of "am". Some have just a dot, some have a little "bowl".

I am missing a Devanagari equivalent to a bunch of Tibetan characters (tsa, tsha, ...) and I suspect it may not even exist in Sanskrit (??)

Also, does anyone know what does ༔ mean? I am utterly confused by the difference between this character and the ཿ symbol. 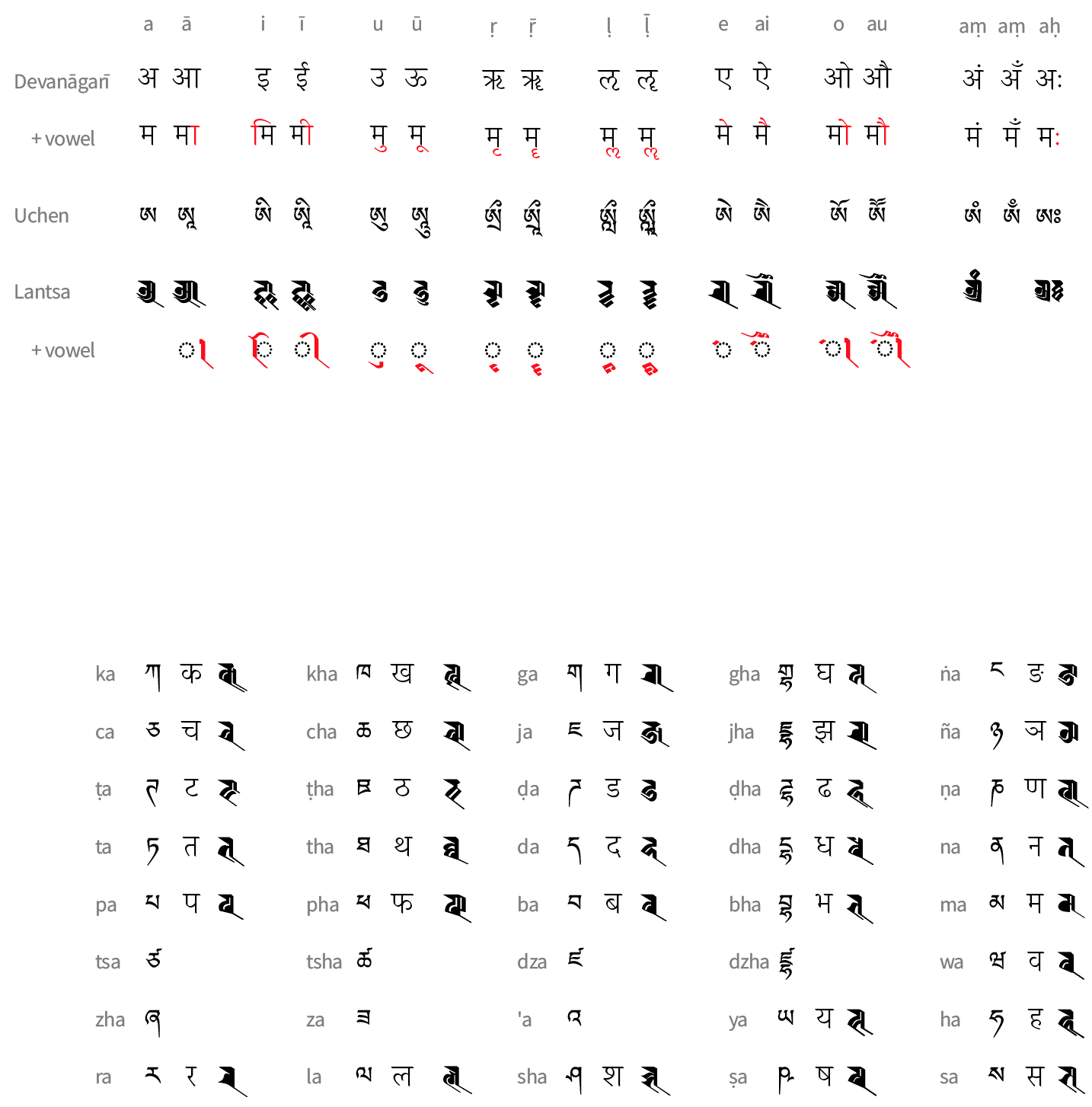 1) The first one in your table (just the dot) is the anusvara, and is usually transliterated with aṃ (a + m with underdot) in the IAST standard. The second one (bowl and dot) is the chandrabindu, and is translated in the IAST standard with a◌̐ (a + Latin script version of the chandrabindu!). But because the phonetic differences from Vedic and Classical Sanskrit are rather poorly understood, they are often conflated in transliteration. They do have a distinct role though, and modern Hindi has fairly well established rules for their use in Devanagari.

2a) Correct; Devanagari never had dental affricates as separate letters. I suppose you could use the conjuncts त्स (tsa), थ्स (thsa), ध्स (dhsa). Apparently, द + स dsa is not attested. You can clearly see that Tibetan derived its dental affricate series from the palatal series.

2b) Devanagari also never had voiced sibilants notated in the script, so the ཞ zha and ཟ za were created in Tibetan. Their origin is not particularly clear, although they bear a strong resemblance (at least in the standard script) to ན and ཇ.

3) The gter tsheg is not a vowel, nor a diacritic, but a form of punctuation mark found at the beginning of certain sentences and paragraphs in religious text, specifically for a terma.

Not the answer you're looking for? Browse other questions tagged devanagari tibetan or ask your own question.