Ask Question
Asked 3 years ago
Modified 3 years ago
Viewed 2k times
1
Closed. This question is off-topic. It is not currently accepting answers.

I am trying to find a document that clearly explains how to apply Hebrew vowels (and what all the combining characters are for Hebrew vowels), but I haven't been able to find anything after a few hours of searching.

The best I was able to find is this: 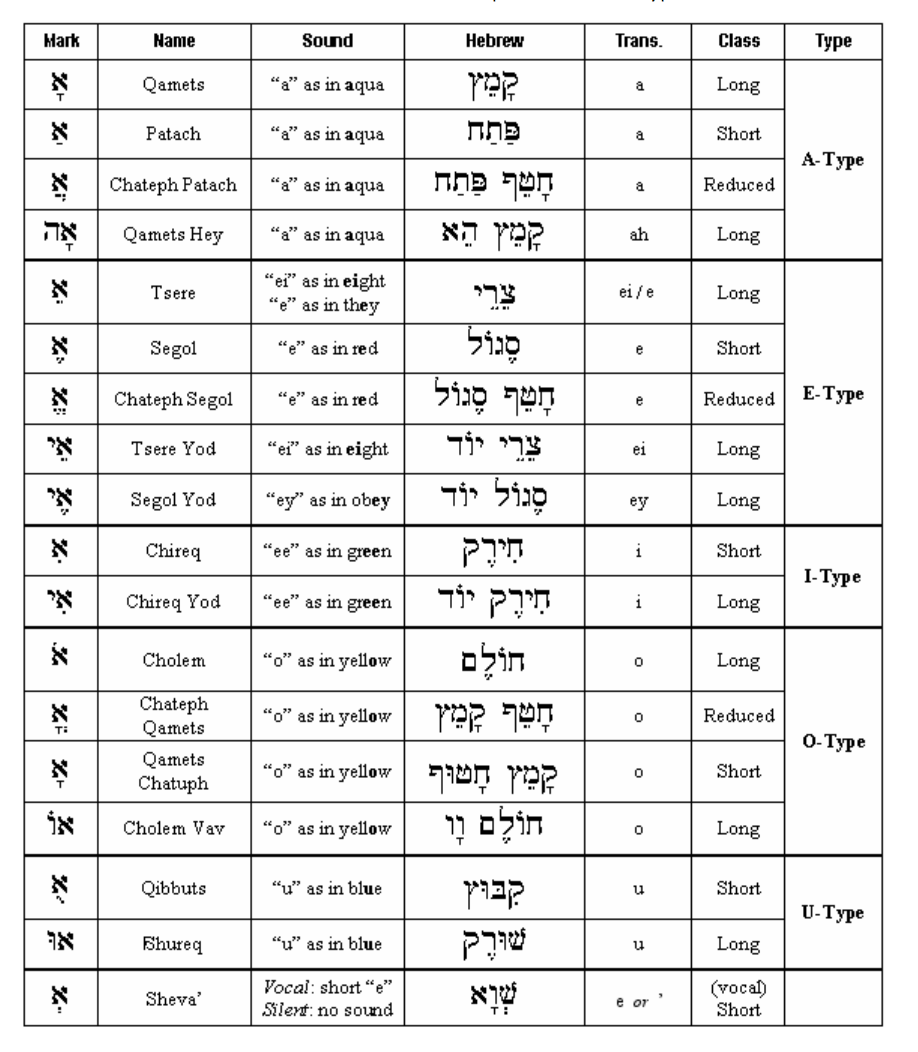 However, it's still unclear to me how to use them.

The two parts to my question are:

The third column is an example consonant it is applied to, and the fourth column is the combining character by itself.

So I am wondering if my table above is complete, or if there are any other vowels I am missing. And then if my assumption that you can apply the vowels to any consonant is correct, or if not, which ones each can be applied to.

Perhaps it is helpful to understand some of the history behind this mixed system.

Originally, Hebrew was never written with niqudot (diacritics added above, below, or within consonantal signs; singular niqud). Although there is a high theoretical ambiguity in such a writing system (e.g. שמר for šāmar 'he guarded', šəmor 'guard!', šomēr '(a) guard') this works quite fine in practice, because when a form is ambiguous usually context helps to clarify which vocalization is intended.

Nevertheless, at some point, scribes decided to add niqud to disambiguate the texts and preserve the 'correct' vocalization for future generations. There were various vocalization systems. The most well-known, which is also used in the Codex Leningradensis (the most-used manuscript of the Hebrew Bible), is the Tiberian vocalization system which you are using. This system indeed uses patakh (/a/), segol (/e/), tsere (/ē/), hireq (/i/), qamets (/ā/), holem (/o/), qibuts (/u/) and shureq (/u/) as vowel signs. The schwa sign indicates an ultrashort /ă/ or is voiceless in syllable-final positions; it can be combined with patakh, segol and qamets to shoten their respective sounds.

The system also has some diacritics which do not indicate vowels: the dagesh sign (a dot in the center) marks gemination of consonants, and /š/ and /ś/, both written with ש, are distinguished by dots above them: שׁ vs. שׂ, respectively.

Interwoven with this is the system of vowel letters, where aleph, he, waw, and yod are used to indicate vowels. Hence we may find שמור for šəmor but not for šāmar or šomēr. Unlike the Tiberian system, which was clearly invented, vowel letters have a more natural origin, namely a stress movement around 1000BCE where stress moved to the penultimate syllable. This caused the loss word-final short vowels. The written פנמו Panammuwa then becomes Panammuw > Panammū. Because of this the waw can be understood to represent the /ū/ vowel. Vowel letters gradually gained traction throughout the first millennium BCE, and you can also see this in the Hebrew Bible (a well-known example is the spelling of David, usually דוד in older texts but דויד in later texts).

These two systems are separate but not unrelated; hence e.g. yod cannot serve as a vowel letter for /ā/ but for /ē/, because original /āy/ would have contracted to /ē/. When the two systems are combined, the system is actually redundant, since there is no difference in pronunciation between דָוִד and דָוִיד. You only need to make sure to remember that the four vowel letters should not be pronounced as a consonant when used as a vowel letter.

The waw is special in that it combines with the dagesh to denote /u/, and that when a holem is placed above it this does not indicate /wo/ but simply /o/ (the holem really is the holem of the previous letter). Holem male is simply a waw with a holem diacritic, this is why the same unicode point can be used.

Not the answer you're looking for? Browse other questions tagged vowels hebrew unicode diacritics or ask your own question.

2
Hebrew root אהב
0
How to differenciate the long vowels from the actual letters in arabic?

44
How do linguists place the vowels of a language precisely on the vowel trapezoid?
10
How can the IPA vowels be memorized?
1
What is the orthography for each of these Khmer vowels?
1
creaky voice unicode character tilde below with vowels
4
"Character sets" for top 100 languages (as opposed to Unicode)
5
Is a vowel only writing system possible?
0
How to annotate the difference between blended vowels and non-blended vowels
1
How Thai Vowels Work
0
Corsican vowels