Can anyone provide a good formal definition of the notion of grammatical category?

Another formulation of this question would be: what is grammatical, in a language? (as opposed to lexical, semantic, or the like). How can we define grammaticality?

Dictionaries are useless. The 10 thousand pages "Encyclopedia of Language and Linguistics" (Brown 2015) contains separate entries for such fundamental notions as "French Southern Antarctic Lands: language situation", it differentiates the entry for "Frisian lexicography" from the one for "Frisian etymology"; yet, it has no entry for "Grammatical category". Which is absurd, in my opinion.

The various linguistic frameworks all talk about this in different ways, but I think the essence of the question comes down to the observation that in all languages there's a difference between what are commonly called "function words" and "content words" (though they may be affixes, clitics, etc instead of full words.) In any language there will be a set of things you say which have regular, non-figurative, and largely unambiguous meanings, and there will be another larger set of things you say with widespread polysemy and which are more freely used in creative extensions of meaning, and which are easily and frequently coined or borrowed from other languaged. Furthermore, the content words are often analysable as being based off of function words. For example, all verbs can be defined as subkinds of the archetypal verbs BE, DO, and HAPPEN, and all nouns are subkinds of THING. Many linguistic frameworks would analyse every lexical item as either a functional/grammatical lexeme standing by itself, or a functional/grammatical bit of meaning merged with some unique content to form a root.

But despite the possibility of very rare grammaticalised concepts, there are lots of ones which typology has shown are very common. These are what the grammatical categories are, the fruit of typology. Grammatical categories are what working linguists need to know in order to study, make sense of, and document previously undocumented languages. The table below comes from Wikipedia. Linguists familiar with all these grammatical categories will likely be able to account for 90% of grammatical morphemes in any arbitrary language from anywhere in the world. Though language description is never routine, and they're sure to find something unique enough to write a PhD about. 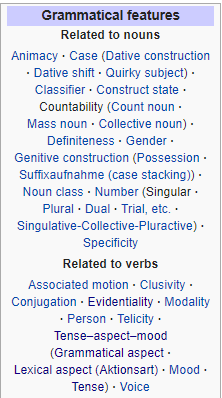 Not the answer you're looking for? Browse other questions tagged terminology morphology theoretical-linguistics grammatical-category or ask your own question.

8
Definition(s) of phoneme
3
Examples of category-changing reduplication
1
In the context of 'case', what does 'grammatical' mean in 'grammatical relation of a noun in a sentence'?
6
How is category theory applied in linguistics?
3
What linguistic category does Swahili's *-ni* correspond to?
4
What's a grammatical feature?
1
Understanding "inflection" and "grammatical category"