I am not sure whether linguistics board is the right place to ask this question, but since I couldn't find any better place here is the question:

Most (all?) of the writing systems are using the vector-like/linear alignment of text. It may be left to right, right to left, top to bottom, etc. But are there any writing systems that use multi-dimensional e.g. matrix-like alignment? Were there any real historical examples or how would, in theory, such a system look like?

It is a bit of an edge case, and much depends on what you mean by "dimension", but the "hidden meaning" usage of furigana above kanji in Japanese may qualify as one extra dimension. The use of the extra dimension varies. It is certainly not part of the usual Japanese writing system, but rather an extension of it into a separate dimension, and it is only really used for its entertainment value.

SignWriting would certainly count, when/if it becomes more widely adopted. With the nature of most signemes requiring at least 2D space as well as time (and I'm sure many sign language users employ 3D space too), the notation tries to encompass all of it on a 2D page. Unicode has encoded some of its characters, but being able to render it correctly is another matter entirely.

The Dongba script of Naxi comes to mind:

As you may have guessed from the picture, the Dongba script is generally left-to-right. But you can also have glyphs stacked together, and this gives it an extra vertical dimension. In addition, it's not always read in the same order. The ensuing discussion is from Fu (1981/2012). 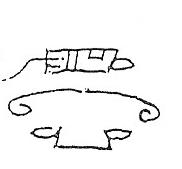 The three characters, from top to bottom, are 3khu, 2mɯ, 2thu. Together they are read as 2mɯ 3khu 2thu. So in this case you start from the middle character.

The house is a female buddha's temple. (The context is that the protagonist of the story, a white bat, is looking for the buddha.) There are three characters inside the house, which when put together mean 'unclean'. The bat was saying that the road leading to the front door of the temple was unclean, and refused to enter from that path.

From these examples I think the script is pretty unambiguously multidimensional.

Inspired by another answer, you could argue that comic books are an example of multidimensional writing, because:

In Korean hangul, each character represents a syllable, which is made of several elements arranged vertically or horizontally. A bit like writing successive syllables from left to right but with each syllable written (in part) vertically.

A possibly case of 2-D writing is Amerindian (Mexican) codices. They look like elaborate drawings but they actually also encode language.

(uncountable) Digital text in which the reader may navigate related information through embedded hyperlinks.

A structured arrangement of items within certain limits.

In principle, language is hyper. There is not one intended order of reading in a shelf of books. Discurse is not hierarchically structured, except when it is. Take three books of one author next to each other, and finding the relations between them will require someone to write a fourth book, repeat ad infinitum.

Caligraphy is a good example when it comes to the spatial dimensions, but painting in general counts as speech in some sense, too. For example, the German term Schrift (cp. "script") covers film et cetera, in legalese.

(uncountable) Graphism of symbols such as letters that express some meaning

Even the choice of a font gives a typeset document certain notes of accentuation. Not to mention the depth of expressivity that a good hand script has. Effectively, it depends entirely on what you mean by dimension. Surely a letter is a grapheme. Only morse code is somewhat one-dimensional, and not even really, because the meaning of the symbols has to be confered through a side-channel.

4
Calculating writing system efficiency with respect to reading ambiguity?
3
Which writing script can represent all human sounds?
11
Are there practical reasons why languages developed left to right or right to left writing sytems
2
Wraparound writing system?
10
Why is Greek alphabet left-to-right?