Does the southern pronunciation of Jenny have a triphthong in it?

You know when Forrest Gump yells Jenny's name and it sounds like "Jenneay". I'm wondering if there actually is a triphthong at the end there, or of it is a figment of my imagination. I believe the phonetic transcription would be: /dʒɛnæɛɪ/ Is this correct?

Or perhaps the southern pronunciation ends on a much simpler diphthong?

Phonetically, I would say no.

Here's a plot of this final vowel (taken from about 12.75 seconds into the linked video). It's not a great plot, since the recording quality I'm using isn't great, but it'll work for our purposes. 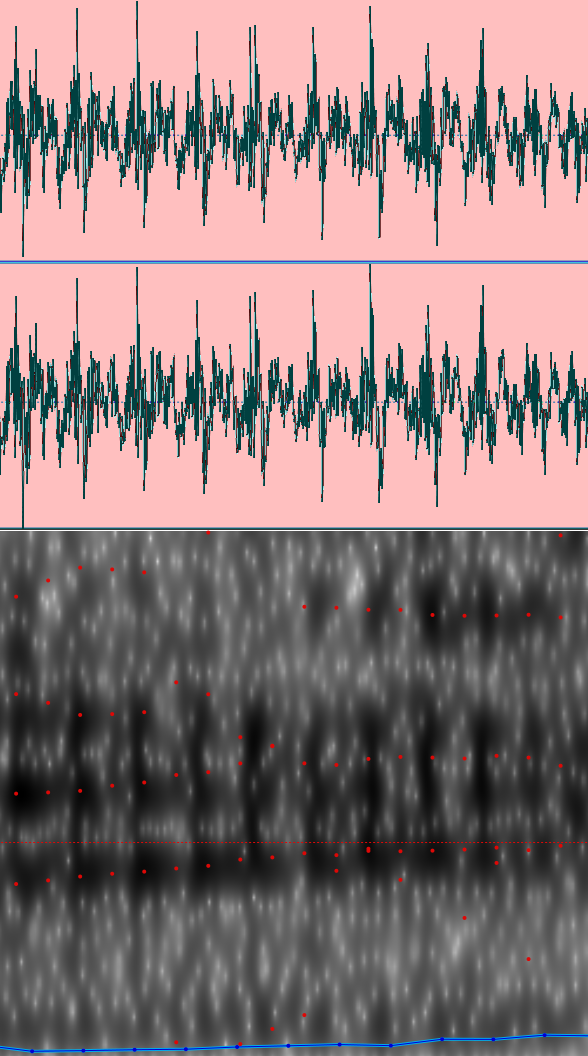 Acoustically, vowels are determined by values called formants, which appear as horizontal black bars in the spectrum. The red dots also represent the formants, just calculated in a different way.

Well, the positions of these formants are continuous: they can show up at any frequency (within a certain range), not only certain specific values. Which means that the space of vowels is also continuous! When someone pronounces a diphthong, they glide seamlessly from one vowel to another—so a diphthong like [æi] starts at [æ] and passes seamlessly through [e] before arriving at [i]. In fact, since frequency space is continuous, it passes through an infinite number of different intermediate vowels!

Clearly, calling all vowel sequences "infinity-phthongs" isn't very useful, even though there are indeed an infinite number of intermediate points. So instead, phoneticists generally ignore everything in the middle, and only pay attention to the critical points—the start, the end, and anywhere the trajectory changes direction.

For example, a sequence like [æɛeɪi] would still be called a "diphthong", since it never changes direction: it moves in a "straight line" from [æ] to [i], and we don't really care about the intermediate stuff. If you connect the dots on an IPA vowel chart, you'll get basically a straight line. So we only care about two phthongs.

But a sequence like [ɑɔoʊuʉy] would be called a "triphthong", because it changes direction once (try connecting the dots on an IPA vowel chart again and you'll see). So we care about the two endpoints, plus the one direction change in the middle, giving us three phthongs.

In this case, there's no real change in direction—the formants are basically straight lines, without any bends or kinks in them. The sound starts somewhere around [ɛ] and moves straight to [i]. It definitely passes through other vowels on the way, but phonetically, that's just how diphthongs tend to work.

P.S. Phonemically, the question is totally different—but I'd also say no. There's no evidence that there are three separate phonemes at the end there; instead, it seems to be an allophone of plain old /i/.

P.P.S. This plot was generated with a program called Praat, which is free to download and play around with if you want to do some phonetic experimentation!

P.P.P.S. "Phthong" is not actually a technical term in linguistics. It's just more fun to say than "critical point in the vowel trajectory".

Not the answer you're looking for? Browse other questions tagged phonetics dialects american-english names triphthongs or ask your own question.

17
Why vowels sound different from each other
5
What is an example of a language or dialect that contains triphthongs?
1
Are Lana's "Yup!"s triphthongs?

3
Correct Alexamenos Graffito Translation
5
Other than Scottish rolled "r" and North American rhotacised vowels, are there any differences across "r" sounds in English dialects?
5
What is an example of a language or dialect that contains triphthongs?
14
Do dialects without the meet-meat merger neutralize the distinction in some contexts?
17
Why vowels sound different from each other
2
Other languages like English whose orthography is "not quite" phonetic
3
Correlation between pronunciation of given names and gender
0
Characterising a difference in the realisation of a vowel
0
Diphthong detection technique -- reference?