Is “imperatives have invisible subjects” a universal?

In English, it's widely held that imperative verbs have "invisible" subjects, on the syntactic level. For example, we see look at yourself in the mirror, rather than *look at you in the mirror, which implies that there's some invisible "you"-like entity in the subject position, which just doesn't appear on the surface.

Is this a universal? Or are there languages in which imperatives have no syntactic subject at all?

(P.S. For some languages, there may be no way to know whether there's an "invisible" subject or not, since it wouldn't affect other words the way English pronouns can. I'm not as interested in these cases: I'm specifically curious if there are languages that would show evidence of an invisible subject, but don't. In other words, I'm looking for evidence of absence, not just absence of evidence.)

There are several exceptions to this rule (etc. Icelandic, Tagalog), see Nikolaeva 2007 for more details. 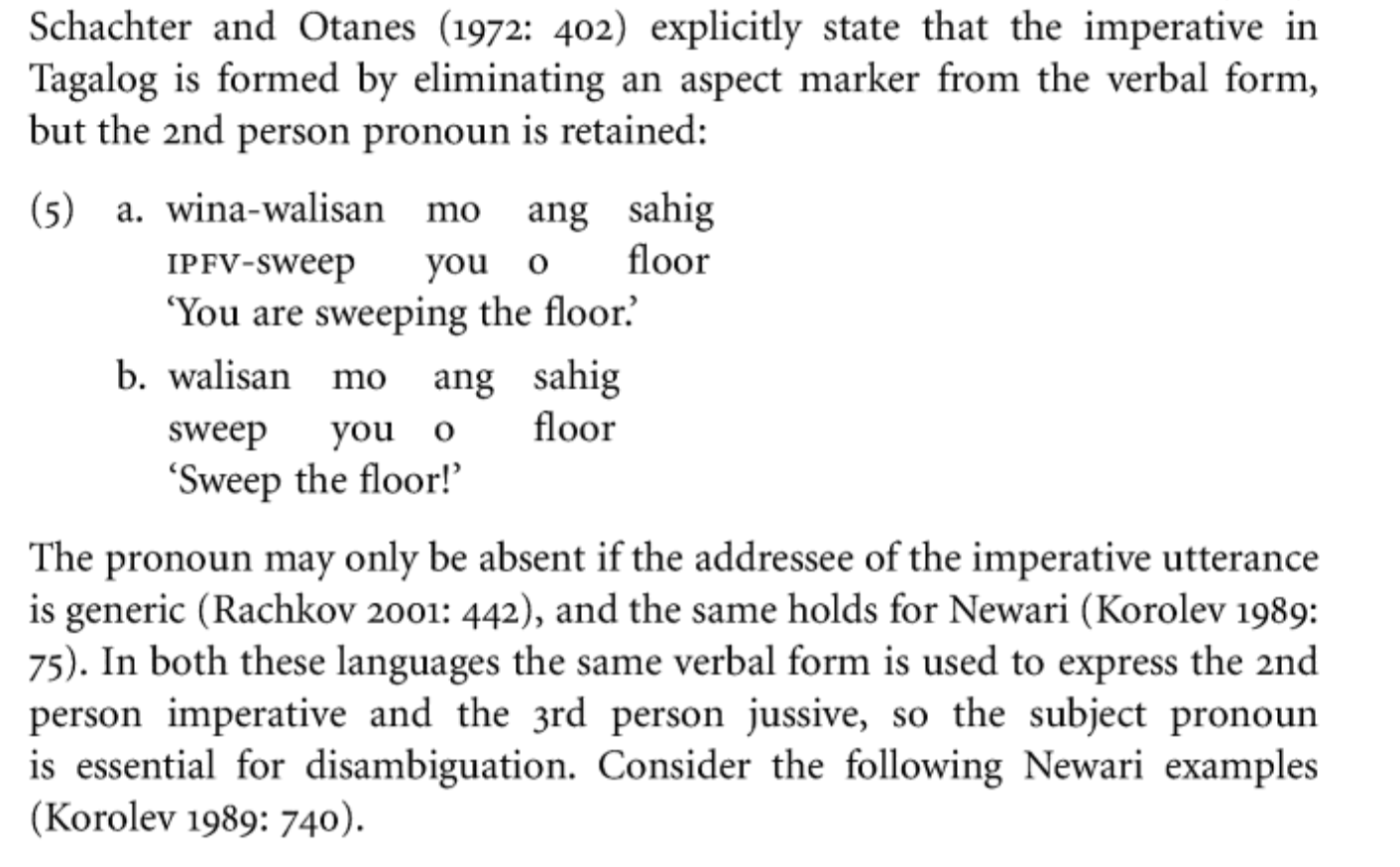 That is why Jerry and Kissine write that such strong universal claims about imperatives are “perhaps ill-advised” (p. 102).

(writing from a phone, sorry about poor formatting abs not giving you examples)

I think the problems associated with defining "imperative" non-circularly are sufficiently large that they preclude answering the question. It is presumably clear that meaning and usage can't distinguish imperatives from other constructions such as subjunctives. Imperatives are not definable morphologically (there are not always bare verbs -- see for instance Sanskrit with imperatives inflected for all persons, Finnish with imperatives for all persons besides 1s). They are also not definable as "the verb forms that you get just in case there is no overt subject" -- there are plenty of pro-drop languages which don't require overt subjects (pronouns or NPs).

We often take the reflexivization facts to be sufficient evidence that the subject of an imperative must be 2nd person in English. This argument is weakened a bit by famous Dong 1967 examples like "Fuck/screw/forget/damn you" (where you can dispose of the problem by saying they aren't imperatives), and by "Everyone make yourself a sandwich" where we have an overt subject of an imperative that doesn't control reflexivization. Since subjects generally control verb agreement in English, Spanish, Greek, Sanskrit, Finnish and so on, we ought to conclude that if there is any subject agreement at all, we have proof that there is a covert subject.

Here is an imaginary scenario that could detect a subjectless imperative. Gwambomambo has a single bare-verb form "imperative" that doesn't indicate subject. It has obligatory person-and-number agreeing reflexive object pronouns. But in Gwambomambo, no reflexive can be the object of an imperative, instead there is also a special imperative object reflexive pronoun -- a form that doesn't agree with anything, which is selected because there isn't anything to agree with (no subject). If you could find this language, it could establish that the claim about there being covert subjects of imperatives is not universally true.

It's not universal even in the Germanic tongues: Caution! Danger! Ger Vorsicht! are neither clearly verb nor noun, yet they are indeniably used as imperatives--to the point that caution has become a transitive verb (the suffix clearly marks it as an abstract noun, doesn't it?)--but they don't go with a subject, in my mind, at best with an anaphoric appelative, so those nouns are subject, object, verb, topic, focus, etc.

Very specifically, "Stopp" or "Halt!" don't inflect in German, although they could.

The stem sicht-, as in "Vorsicht" derives a noun that can't be easily confused with the verb sehen, imp sieh, "see", but it also derives a verb sichten "to inspect, scout, observe"; So I suppose Vorsicht derives from an appelative verb. Not to be confused with foresight, foresee, vorsehen, versehen, etc etc.

It should be quite interesting to find out where that came from. But it would blow this answer out of proportion. I really wonder how important imperatives, ejectives (poo, pfft, bah, which are also ejective in the phonetic sense, or all the flavours of ah, eh, hu, ohoh) and other kinds of short phrases were for language genesis. Just consider this exchange:

This be a stick-up!

shot's fired from an unclear direction

Not the answer you're looking for? Browse other questions tagged syntax verbs list-of-languages imperative reflexive or ask your own question.

15
Is there a term for the syntax difference between English “I like you” and Spanish “Tú me gustas”?
4
Could we apply Neo-Whorfianism to parameters in the P&P sense?
10
Languages with subordinate imperatives?
5
Detecting actions within text
2
Are Spanish “que” clauses following “parece” complements or postponed subjects?
2
The grammatical subject, the logical subject, and something new
3
Syntax: VP subject internal null V head from Carnie's book
2
Semantic predicate-argument relations reflected in syntax
7
Are there any languages with minimal distinctions between the noun and verb categories?