Transcription of this computer-generated pronunciation of 1991 in Danish

I came across this Google Translate pronunciation of 1991 (which it appears to be interpreting as the year rather than the cardinal or ordinal); click the thumbnail for the video on YouTube: 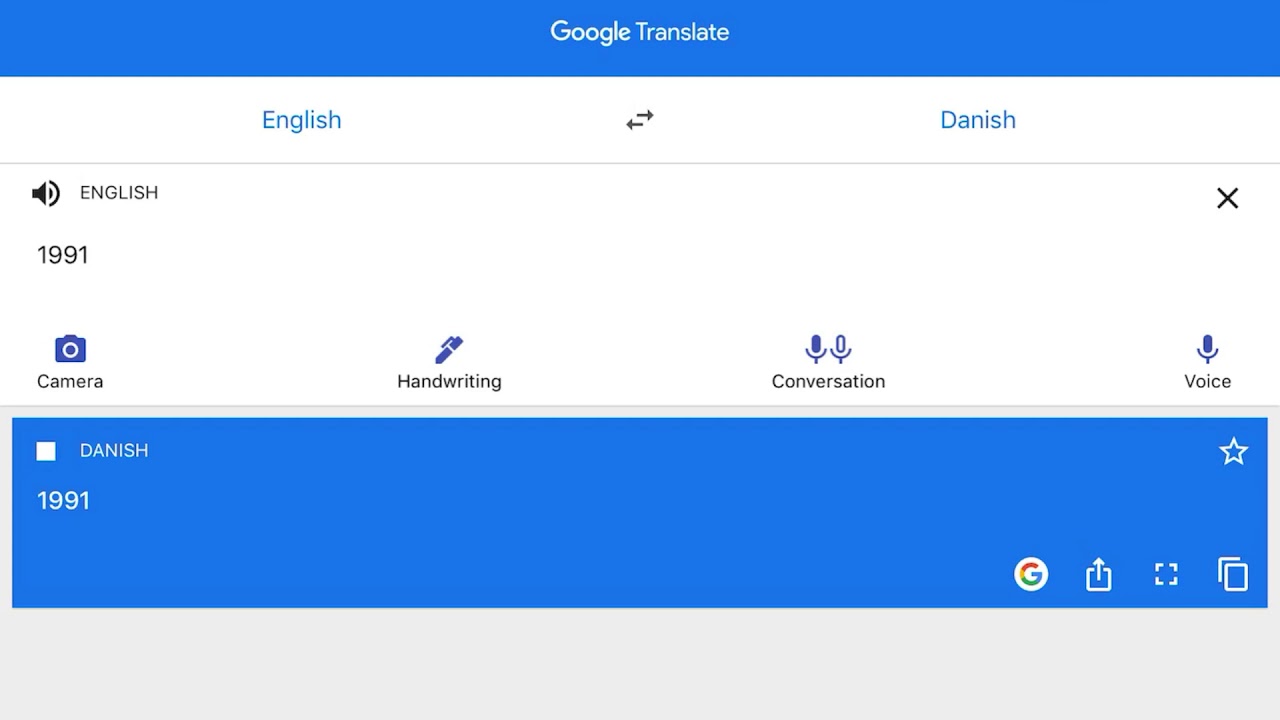 I don’t know if this pronunciation is accurate for an L1 Danish speaker, but it’s very hard for me to even get my head around, even slowing down the audio and listening over and over. Danish number construction is a bit complex, so I’m not sure

As I said, by giving 1991 context I was able to hear different pronunciations for counting 1,991 things vs. the 1,991st thing vs. the year 1991, and the last is the only one I find completely puzzling.

(I know that speakers of other mutually-intelligible languages with Danish like Swedish frequently make fun of Danish numbers, so I imagine something strange is going on here; I just don’t know what.)

p.s. I have added another video using the input “nitten hundrede og en-og-halvfems, 1991”. Except for intonation, these two seem to be the same? So I think that mystery’s been solved. But how to transcribe it?
computational-linguistics ipa germanic-languages danish
Share
Improve this question
edited May 21 '20 at 19:59

I’ll refer to the two versions you’ve recorded as recording A (“1991” written in numbers) and recording B (“nitten hundrede og en-og-halvfems”) for simplicity.

Of these two, A is the more accurate of the two.

This is not surprising, since the correct spelling of 91 in letters in Danish is enoghalvfems with no hyphens; the hyphens appear to be throwing Google Translate for a loop in recording B, so that it somehow ends up with a stressed og (which would never occur in real life).

Recording A is actually quite good – apart from being a bit slow and with slightly unusual intonation, it sounds quite natural. It is definitely saying nitten hundrede og enoghalvfems, which is correct and how you would say it in natural speech (though the first og would more commonly be left out in speech).

Danish can be tricky to transcribe accurately in IPA due to the large inventory of mid-to-high front vowels and the phoneme /ð/, which phonetically tends to be realised as a velarised, lowered, centralised voiced alveolar approximant [ð̱̞ˠ] and also appears in a syllabic form. I’ll ignore the finer details here for legibility, but if you think the IPA doesn’t match the sounds ‘spoken’, these details may be why.

With that in mind, I’d transcribe recdoring A thus:

That describes regular, colloquial speech quite accurately too (the parenthesised bit would normally be left out).

The only thing that really stands out as sounding unnatural is the presence of a glottal stop before the vowel-initial words og and en. As in English, those would tend to be limited to slow, careful speech when spoken by actual humans. Well, I say ‘glottal stop’. It’s actually – and quite authentically – realised rather as more of a stød in the recording.

Note: At the beginning of your question, you write:

While it’s true that it’s definitely not the ordinal (that would be nitten hundrede [og] enoghalvfemsindstyvende or – informally, especially by younger people – nitten hundrede enoghalvfemsende), the recording can be either the cardinal number or the year, just like ‘nineteen hundred (and) ninety-one’ could be in English.

As in English, years (and sometimes cardinals, especially when counting) are frequently read without the ‘hundred’ bit, so 1991 as a year could also be nitten enoghalvfems [ˈne̝dn̩ ˈe̝ːˀnɐ͡ælˈfe̞mˀs].

Generally, you get a better response from Google Translate if you write numerals with words. Then you can read the Danish words as well.

Update. Actually, your record says ”nitten hundrede og en og halvfems” which is a correct but probably old-fashioned wording for 1991. However, there is something strange going on with Google Translate, it is translating the phrase "nineteen hundred ninenty one" as 1990 both in Danish and in Swedish.

Not the answer you're looking for? Browse other questions tagged computational-linguistics ipa germanic-languages danish or ask your own question.

3
Are there any sources that provide accurate IPA transcriptions for Danish?
2
How to learn computer syllabification of IPA?
3
Is there a computer-readable Hiberno-English pronunciation dictionary?
3
What are partially voiced stops (as in Danish)?
0
What grammatical features should we assign to the Danish superlative forms -st and -ste?
0
Narrow Transcription: How is "very narrow allophonic" transcription identical to "impressionistic" transcription enabling something extra?
3
Where are these Danish sounds in IPA?