A Lesson in Transcribing Egyptian Hieroglyphics

I am trying to transcribe some images of illustrations of hieroglyphics into Unicode. I am having a hard time and right off the bat there seem to be slight variations in the structure of the hieroglyph. For example, in the illustration attached, the first ellipse has a line off to the side, while the one on Unicode has either 2 lines or no line 𓂋. Then the bird, how do you pick a bird?

There are about 50 birds that don't vary too much for the most part. Wikipedia tells us this:

But then you see a bird like in the image on the attachment, and then go like "How do I decide which bird is the right one?"

So my question is, how would you take the image below and make it into Unicode? How do you know you're picking the right one, even though there are such slight variations in the Unicode hieroglyphs like the birds, and also in the drawings like the attachment shows (comparing its glyphs with Unicode). 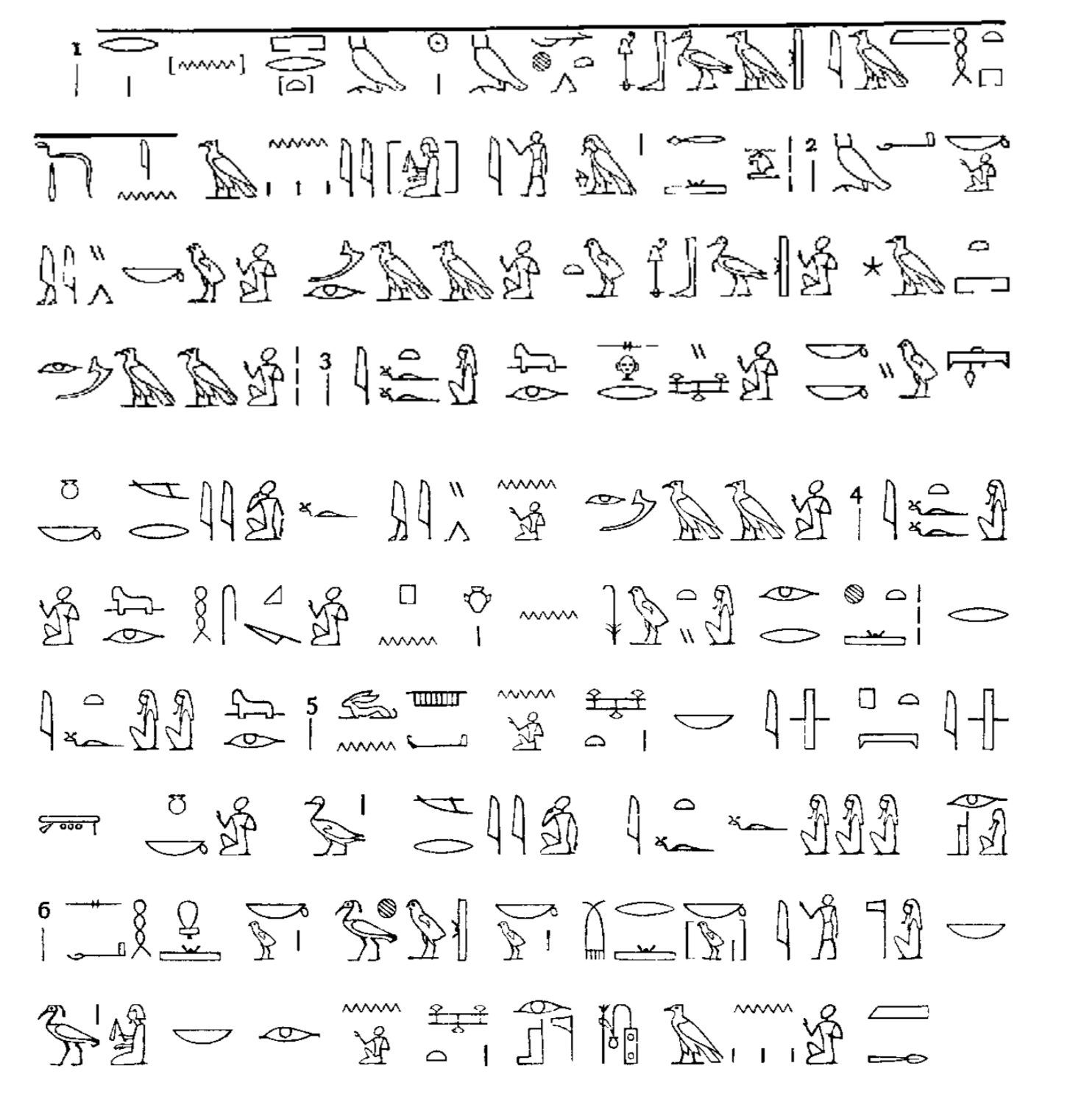 And here is all of the Unicode characters which are possible for transcribing glyphs into Unicode. It seems like a lot are missing, I don't know, what do you think? What are your thoughts? How are you supposed to accurately translate an image into Unicode (or some more extensive code perhaps). Unicode is based on the Gardiner numberings from what I've seen, but maybe that doesn't cover all of the possible glyphs. So what are you supposed to do? Anyway, here are the glyphs.

Short answer: Gardiner's classification system. It's what Unicode (and every major dictionary I know of) uses, and is quite comprehensive; pretty much anything you come across in everyday Egyptology will be listed in there somewhere.

Gardiner also includes a list of notable variants for each sign: distinct graphical forms that should be considered to represent the same underlying symbol. ("Allographs"?) For example, here's the very beginning of his list, showing A1 through A3:

While A1 and A1B looks very different, they're stylistic variants on the same theme, and should be read the same way.

So if you want to convert a hieroglyphic inscription to Unicode, the first step is looking up each symbol in a good copy of Gardiner's list, then converting from Gardiner number to Unicode codepoint. (The second step, thankfully, is easy to automate, and I've got a Python script somewhere that does it for me.) I'm pretty sure Gardiner's work is in the public domain, so it shouldn't be hard to find a good electronic copy—Wikimedia Commons has one somewhere.

In your case, this inscription starts out D21 Z1 N35 O1 D21 X1 G17 N5 Z1. In conventional transliteration, this is r n prt m hrw, literally "chapter of coming forth during the day"—do you recognize that phrase? It shows up at the beginning of several chapters of the Book of the Dead, though it usually has a determinitive D54 in the middle, and spells out hrw a bit more phonetically. (Prt "proceeding" is usually written O1 D21 X1 D54 to distinguish it from prt "the month of Prt", written O1 D21 X1 N5, and other similar words. In actual spoken Egyptian the vowels probably distinguished these, but those vowels weren't included in writing, so determinitives took their place.)

(Meta; to be removed once the question edited) This post has a seed of a good question, but it is a bit wordy, meaning it contains useless information (all letterforms), subjective/open-ended parts (like "what do you think?"), plus asking several questions in one. I suggest you to edit it to make it more succinct.

What interesting question I see here is, How to tell letterforms apart?

Referring to Doug Cooper's of the Center for Research in Computational Linguistics paper, How do Thais Tell Letters Apart?. Although it is about another language (Thai), there are several key points that help you understand the principle of deciphering an arbitrary font and figure out what letter you're looking at.

Not the answer you're looking for? Browse other questions tagged orthography transcription ancient egyptian or ask your own question.

2
University Level Hieroglyphics Material
0
How do you translate academic runic encodings to runes (ᚠᚢᚦᚨᚱᚲ)?
1
How consistent are the Egyptian Hieroglyph carvings orthographically?
1
How to decode the Cuneiform ORACC data?
0
How to build a robust transliteration scheme across languages?