A sentence might be split into subject+verb+object order. But there are two ways of doing this.

I would say the first one is more natural because the sentence:

seems more natural than the sentence:

(It would probably be said "The girl stroked the cat and the boy fed it.")

But this may just be because usually one object can do several things, whilst it is rarer to talk about several things doing something to one object. (In fact it's hard to think of any examples!)

But although awkward we can still understand what the second sentence means.

I wonder if it is the same in all lanugages? Or maybe this says something about how sentences are ordered in our brains? I'm not sure quite how the rules of conjunctions work in other languages other than English.

The question is concerned with the nature of the strings that can be coordinated. Certainly, coordination (conjunction or disjunction) patterns in many languages similar to how it patterns in English. There is flexibility concerning the strings that can be coordinated, although certain instances of coordination do seem to flow more than others. This is the case with the examples produced in the question. Verb+object conjuncts occur frequently, e.g.

While it is true that subject+verb conjuncts occur much less often, they do occur and can be quite acceptable. Such instances of coordination are known as right node raising (RNR). The next examples are taken from the Wikipedia article on RNR (https://en.wikipedia.org/wiki/Right_node_raising):

(8) [Sometimes she carefully reads], but [at other times she merely skims], the reports they produce.

Notice the commas (which I have inserted). The presence of RNR is associated with a unique intonation contour, the short pauses aiding processing.

When we look to other languages, we also find great flexibility concerning the strings that can be coordinated. The next examples illustrate some of this flexibility in German (and they would probably not be viewed as instances of RNR): 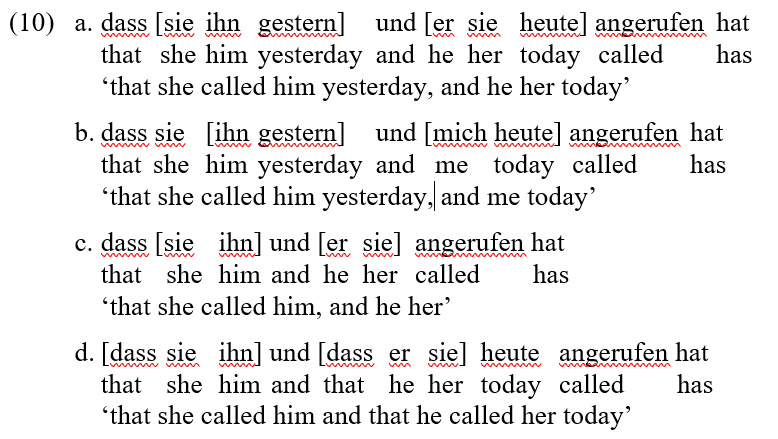 Certainly, many more similar but distinct such examples can be produced. Consider also the nature of the coordinate structures in the English translations of these examples. The first three involve gapping (Wikipedia: https://en.wikipedia.org/wiki/Gapping), another unique type of coordinate structure, one involving ellipsis.

What we can learn from all these examples is that the coordination mechanism is indeed very flexible. Any claims about the nature of syntactic structures based on coordination should take into account the wide range of phenomena associated with coordination, such as the cases above. My personal view is that coordination as it is usually employed is not a valid diagnostic for identifying the constituents of phrase structure grammars.

Finally, I think the comment at the end of the question is on the right track. I believe that a solid understanding of coordination is promoted by the insight that sentences are produced and processed in the brain (â€śordered in our brainsâ€ť), in an online fashion moving from earlier to later (i.e. left to right in English and other languages that written from left to right).