How to measure auditory distances between vowels

(Followup to this question, also related to this answer.)

The Handbook of the International Phonetic Association (1999: 11–2) defines the values of cardinal vowels as follows:

[T]wo fully front vowels [e] and [ɛ] are defined between [i] and [a] so that the differences between each vowel and the next in the series are auditorily equal; and similarly, two fully back vowels [ɔ] and [o] are defined to give equidistant steps between [ɑ] and [u]. The use of auditory spacing in the definition of these vowels means vowel description is not based purely on articulation, and is one reason why the vowel quadrilateral must be regarded as an abstraction and not a direct mapping of tongue position.

But this begs the question as to how those supposed auditory equidistances are, or can be, determined. We know they do not correlate exactly to the formant frequencies: the acoustic distances between [i u] and [e o] are smaller than those between [e o] and [ɛ ɔ] or between [ɛ ɔ] and [a ɑ]. 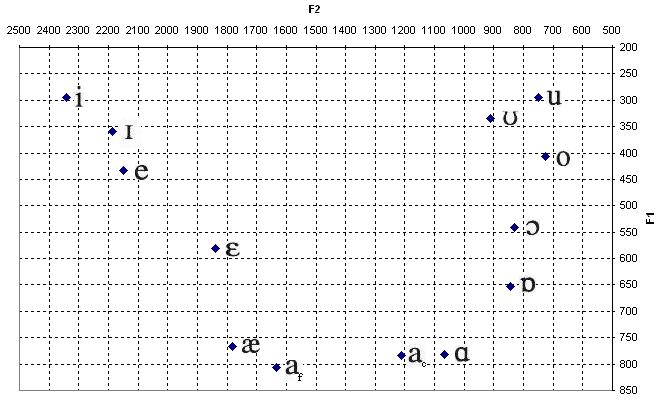 Is there a way to measure auditory distances of vowels? Is it possible to (re)define the values of the close-mid and open-mid cardinal vowels based on any acoustic or auditory measures?

In his 1967 Three Areas of Experimental Phonetics, Peter Ladefoged speculated that, since the technology available back then was unable to determine the formants of high and back vowels, humans also lacked the ability to determine them, hence the discrepancy between acoustics and perception.

(1) The acoustic quality of most vowel sounds can be conveniently specified by stating the frequencies of their first two or three formants.

(2) This is not true of vowels which are called in traditional terms close vowels, nor of so-called back vowels. It is not at all easy to analyse these vowels in terms of their formants.

(4) The listener to speech uses his past experience to form an adaptation level, the immediate past experience of a particular voice being the most important factor in this process.

(5) Neither of points 3 and 4 above has been shown to be true for the vowels mentioned in 2 above.

But now computers can extract the formants of high and back vowels just as easily as any other vowels, and I've never seen Ladefoged's speculation (in 1967) repeated in more recent literature, including his. Has this speculation turned out to be true, false, or just less likely? Can one devise a means to confirm or deny it?

Although auditory equidistance is foundational in the cardinal vowel system, it is widely known that this is a problematically unvalidated concept. Peter Ladefoged made this point a few times. Here is a proposal for empirically testing the concept, based on a higher-tech version of Jones' method. The input stimulus is a pair of vowel-like synthetic stimuli, for example cardinal vowels 1 and 5, and the task is to select two points on an auditory continuum that are (subjectively felt to be) equally-spaced from the endpoints and from each other. Subjects can be trained on a pitch-based and amplitude-based analog (this would also provide a useful metric of whether subjects understood and could perform the task). A third kind of "training" task would be to construct a continuous model of some kind of non-speech complex wave (e.g. varying amplitudes in a 5-component series with component frequencies 100, 200...500 Hz). The main equidistance test would then involve subjects doing the same thing for (plausible) vowel stimuli which vary F1 and F2.

The hard part, IMO, is setting up the task so that the program does not just give you the answer automatically, but you also don't have to randomly search an inventory of thousands of possible F1,F2 values. As a first pass at this experiment, you could reduce formant pairs to a single point on a linear equation, and impose a certain granularity on those points (for example, 10 possible points spaced apart physically-equally on that line). I suggest putting the candidate points in a physically random position, not a straight line. A variant of this approach presents pairs of sequences like "i e ɛ a" where "i" and "a" are identical, and the nature of the intermediate points varies between Candidate 1 and Candidate 2 (the question for the subject is of the type "which of these two is closer to equal spacing?").

Not the answer you're looking for? Browse other questions tagged phonetics vowels acoustic-analysis perception or ask your own question.

5
Why were the formants of high and back vowels difficult to obtain? And why not anymore?
3
Is Daniel Jones' cardinal vowel system auditorily or articulatorily based?

3
How usual is it for languages to have multiple contrasting “neutral” vowels?
0
How to work with an IPA chart?
5
Confused about vowel diagram (Vowel chart)—Can you clarify and explain how to read it?
1
Most Distinguishable Monophthongs/Vowels?
1
When plotting vowel space, why does using F2-F1 better resemble the idealized vowel chart than using F1?
2
Formants - beyond F2
5
Formant frequencies of consonants
5
Why were the formants of high and back vowels difficult to obtain? And why not anymore?
0
What is the maximum possible number of formants?
0
Confounding factors in the perception of foreign vowel sounds