Would you please exlain to me why can't we have two main verbs in a sentence in syntax?

Thank you so much

(Making this an answer so that I can include images; I can't do that in a comment.)

"In syntax" is pretty vague: there are many different theories of how English syntax works. But in all the ones I've ever heard of, you can coordinate two VPs to get a new VP. 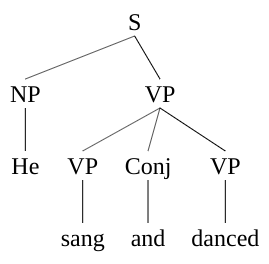 Some theories only allow binary branching, in which case you have to add an extra level of indirection: 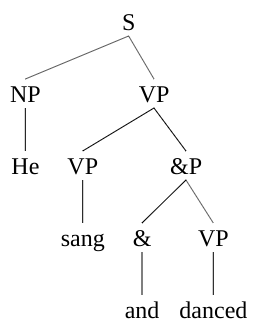 And there are various arguments about why one of these ways is better than another. But I don't know of any theory that doesn't allow combining two VPs into a conjoined VP with a conjunction.

(Depending which theory you're using, your trees may not look like this: the root might be a TP or an IP, for example, instead of an S. But I'm going with the simplest model I can think of to show off the bits that are important.)

Not the answer you're looking for? Browse other questions tagged syntax historical-linguistics verbs or ask your own question.

4
Main types of contrast involved in contrastive analysis of syntax?
2
Why semantics can't be the input to syntax
0
in the definion of government, why can't we allow asymmetrical c-command while we accept symmetrical c-command?
1
Is a sentence, composed of mainclause and subclause, represented by one or two syntax-trees?
1
Semantic roles in the sentence with ´have´
4
What prevents verbs from taking more than a two or three complements/arguments?
1
Did all regular/irregular verbs arise from the same two sources?
1
English sentence patterns or verbs in the order of the degree of introduction