I have encountered some cuneiform on a concert tour poster:

I was wondering what it could mean. If it means something at all. I don't have any knowledge in cuneiform.

So far I found "man" and "god/heaven", but the little addition at the upper end of "man" escapes me. Can someone help? 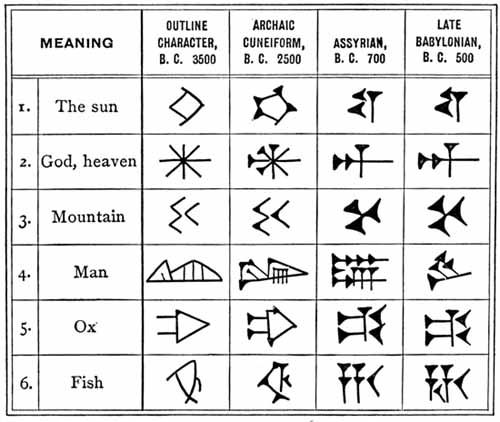 It appears to be a made-up combination of signs from different periods, with one of the signs flipped backwards.

Cuneiform signs LÚ (LU2), MUNUS / SAL and AN / DINGIR in their Old Babylonian and Neo-Assyrian forms.

There's probably some nice symbolism going on there, but it's not actual historical cuneiform writing.

Ps. The signs in the table above are from the free Unicode cuneiform fonts "Akkadian" and "Assyrian" by George Douros, which quite closely resemble the sign shapes seen in your poster. In fact, while the match is not exact, the resemblance is so close in various small details (e.g. the lengths and positions of the diagonal wedges in AN) that I'm willing to bet that they're both derived from the same source. That common source might be some sign list or an older cuneiform font, possibly one of those mentioned in the introduction to Borger's Unicode cuneiform sign list.

Besides the fact that the AN sign is from a different period than the others, another clue that it's taken from a different modern font (or sign list) is the fact that its wedges are drawn with hollow heads, rather than filled as in the first compound sign. The choice of using filled or hollow wedge outlines when drawing cuneiform signs on paper is a purely arbitrary decision that doesn't reflect the actual historical appearance of the signs on clay in any way. Some assyriologists just prefer one style over the other, while some may use both according to some specific rule, e.g. using the hollow outline variants for missing and/or damaged signs that have been reconstructed based on the surrounding context.

Written on clay, the signs would look something like this: 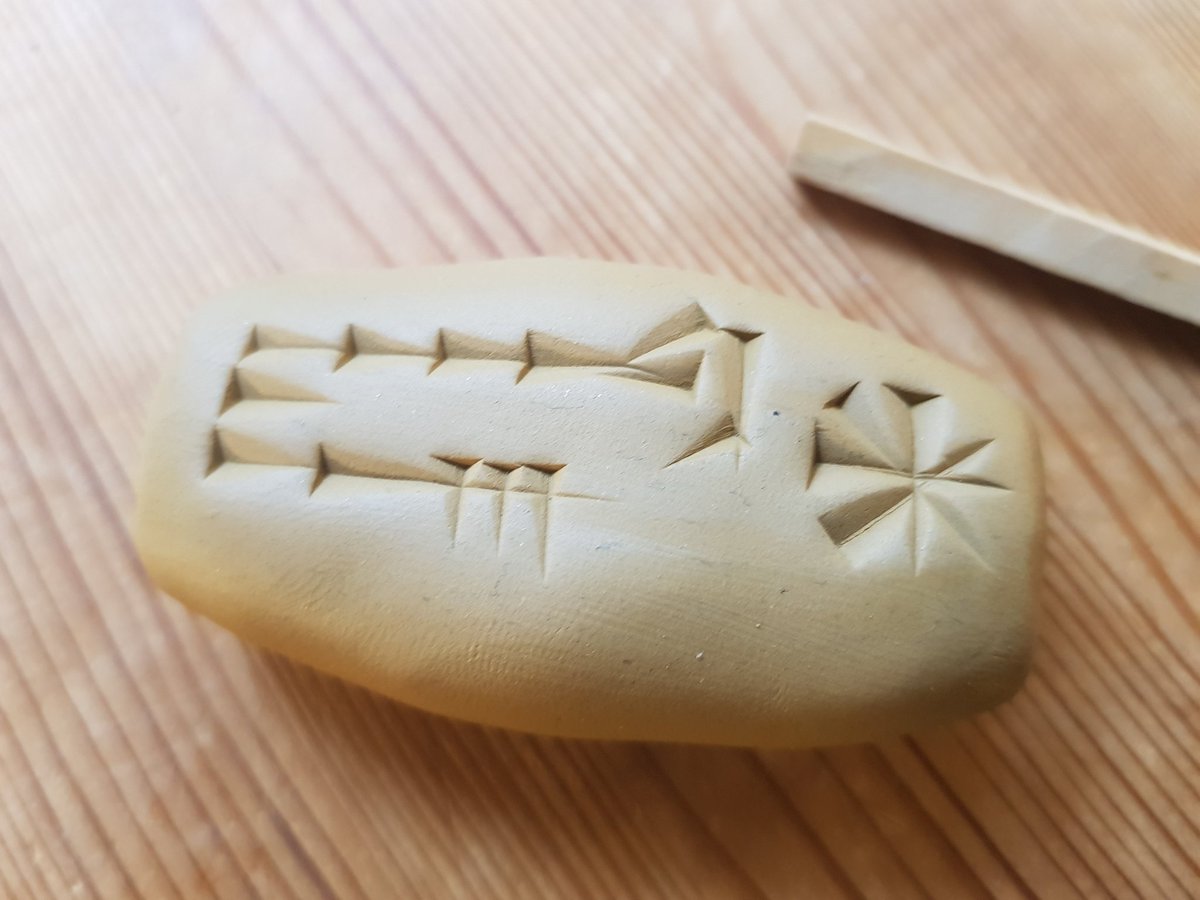 Also, a telltale sign of the MUNUS component having been mirrored is the reverse horizontal wedge (i.e. with the wide end on the right), which almost never appears in any normal cuneiform signs. To write such a wedge on clay, you'd need to either turn the stylus backwards and hold it in a really awkward way, or else temporarily rotate the whole tablet by 180°.

Such backwards wedges do appear in some complex historical signs composed of multiple mirrored parts, such as dalhamun4 = AN+NAGA×4 — i.e. the signs AN and NAGA written together four times as a 4-way symmetric cross — found in a lexical list of deity names as an epithet (or, perhaps, better described as a fancy calligraphic emblem) of the storm god Adad. Such signs would've been quite awkward to write, explaining why they rarely occur in normal cuneiform text. 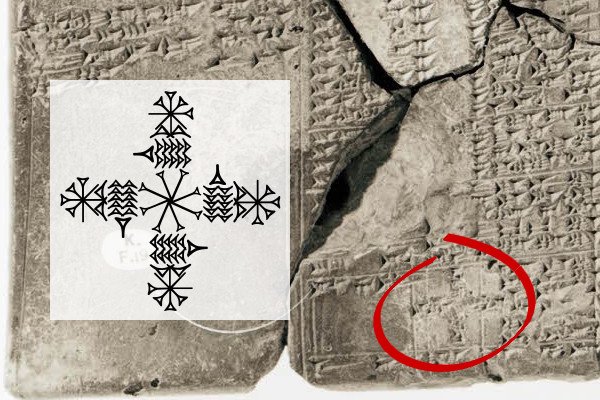 The cuneiform sign dalhamun4 = AN+NAGA×4 as it appears in a copy of the "An=Anum" lexical list of divine names (tablet BM K.4349). Original photo © Trustees of the British Museum, released under the CC By-NC-SA 4.0 license.

BTW, as noted above, assyriologists do have more or less systematic ways of representing such compound signs. The first sign in the poster could be written e.g. as |LU2+MUNUS@h| in ATF notation. I'm not aware of that particular sign combination having ever been attested in historical sources, however.

The closest match for the first sign is SES "brother", but it's only close, because the extra nails in the right upper corner should not be there.
Besides, the two signs do not belong to the same period of cuneiform. The left one is younger (somehow Assyrian-looking) than the right one (more archaic and Sumerian).
I tend to think that these signs do not have a real meaning and have been selected or invented for the sake of aesthetics. The job of an artist, not that of a scribe :);)

I agree with the other two answers: this is not genuine cuneiform writing. The first "character" is obviously a stylized picture of a trumpet with its three valves.

4
How can I find the word "behind" a cuneiform logogram?
4
How do Sumerian cuneiform and Egyptian hieroglyphs differ?