To ease my learning of Thai basic day time-units I have made the following chart consisting of these parts:

I understand there are four specific times of day that I described as I recognized from my teacher and wrote in English but I don't know how to write in Thai:

Here are screenshots from the file I have made, which is lacking specific times of day in Thai script: 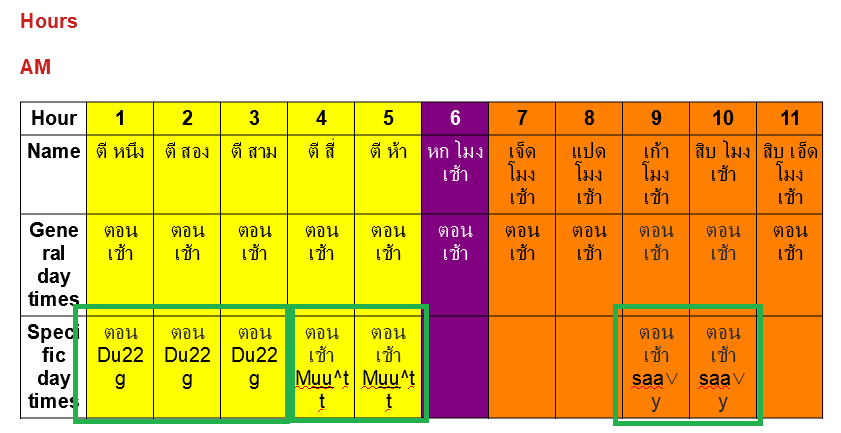 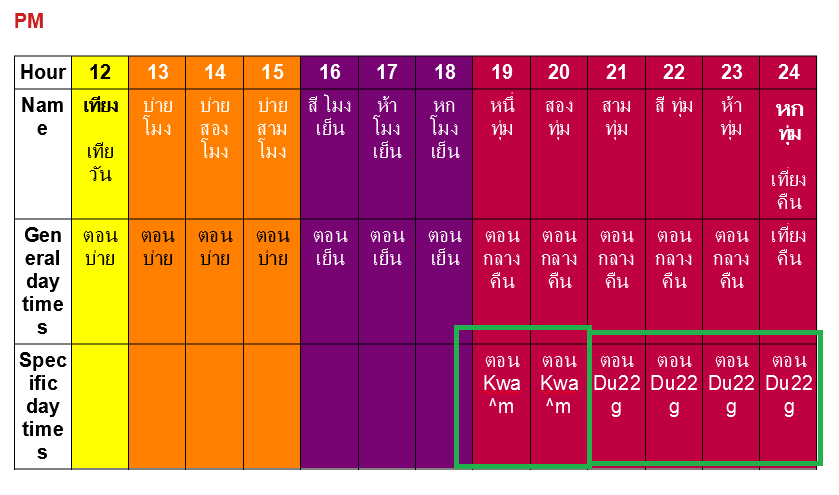 In Google translate and some other webpages about Thai basic day time-units I didn't find these specific times of day (at least transliterated in Thai script).

How are these four specific times of day are written in Thai?

The words in question seem to be (in order of appearance):

In addition, it is normally to say ตอนคืน [tɔːn kʰɯːn] to colloquially tell the period of time between midnight and 6AM.

P.S. Because the question is about specific words in a language, it is not about linguistics (as a scientific study of languages in general) at all, so I'm afraid it will be closed soon.

P.P.S. There have been several attempts to create a language-specific site for Thai language on Area 51 (including two or three mine), but all failed due to lack of interested users. If you feel interest and courage, please consider proposing a new site for Thai language and invite prominent users who would commit to it.

3
Thai alphabet romanizations?
2
What type of trilled R shows up in Thai?
4
'Interstitial' tones in Thai
2
Why does Thai have no words for “yes” or “no”?
2
How common are the “politeness particles” in Thai?
1
How Thai Vowels Work
3
Google Translate Thai with IPA transcription?
1
Was the Thai letter ด really derived from ต?