(Why) did the Thai script convert Sanskrit द /d/ to /th/ and then introduce its own character for /d/?

The first section of the Thai alphabet/abugida seems to follow Sanskrit pretty closely, with just a couple of additions.

I believe that Sanskrit had the consonant /d/, which is represented by द in the Devanagari script and became ท in the Thai script, where it has the phonetic value /th/.

Seemingly, an additional character, ด, was added, even though ท was already available (and the same can be said about ฎ and ฑ).

Is there any explanation for why the consonant ท was not simply given its original value? Is there known to have been some difference between this /d/ and the Thai /d/, or perhaps some practice of pronouncing Sanskrit words transliterated using that consonant with /th/, while home-grown words used /d/? Is it known whether ด pre-dates ท? Answers to any of these questions would be very welcome.

We have a case of historical spellings. We'll use the descendants of the alveolar stops as the easiest to understand:

When the Thai script was developed the late 13th century, there was already literacy in Pali and Mon-Khmer scripts. Hence, one reason for the design was backward compatibility. But this was not to some "original" or "authentic" Sanskrit pronunciation, but to the usual way that people had learnt to read these texts in Old Thai.

For the purposes of Old Thai loanwords from Sanskrit, Pali and Mon-Khmer, the four letters were more-or-less sufficient. At the time, Old Thai seemed to have merged द and ध into */d/, and so ท and ธ were both */d/. However, the issue of different phonologies was realised: Old Thai in the 13th century had another dental plosive, which has been theorised to be */ʔd/ pre-glottalised or perhaps */ɗ/ implosive.

There was a robust contrast between this phoneme and the other dental stops (unlike in late Khmer of the same period), so it appears that a new letter was created for it, ด, based on modifying ต. Although it may seem to us that using a version of /t/ to create a character */ʔd/ is counter-intuitive, one article points out that these pre-glottalised consonants "are considered to be voiceless because the glottal feature is voiceless". This is repeated for */ʔb/ บ created out of /p/ ป (Devanagari equivalent प). Slightly differently, it is theorised that */ʔj/ อ came from a presumed /ɦ/ ฮ (Devanagari equivalent ह), although it seems that there was already a functional role for it in the new script (placeholder consonant, which did not really exist as a role in Devanagari). Note that there is no */ʔg/ reconstructed for Old Thai, and it doesn't appear in the Thai script either!

Note that there are other add-ons of the Thai script in Old Thai aside from the pre-glottalised consonants; there are the extra fricatives (velar: ฃ and ฅ; labial: ฝ and ฟ; palatal [but really voiced alveolar]: ซ) which were just not a thing in medieval Indian languages. These were formed from the voiced unaspirated and voiced aspirated series.

This is best summarised diagrammatically as such: 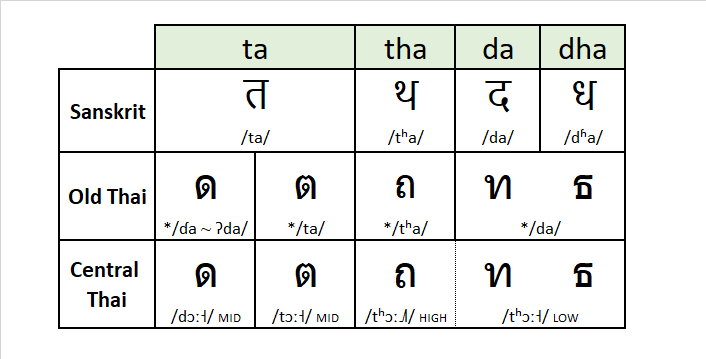 I believe the full answer would take a whole book. Here's the brief:

The table below shows Pali consonants and its original phonetic values. I compiled it from several sources. 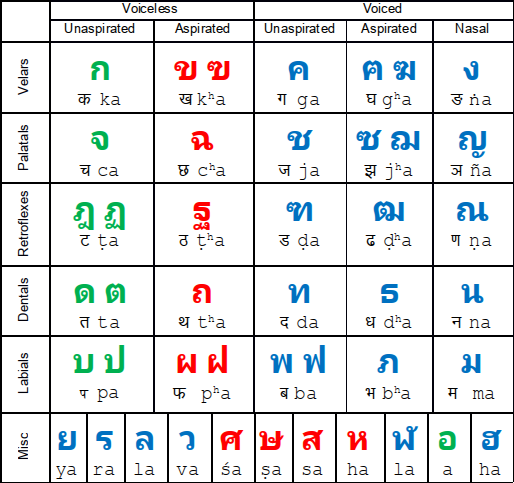 One may notice second letters in cells, created to restore the ancient pronunciation after the original consonant changed its phonetic value. For instance, as soon as บ shifted [p] → [b], the ป was introduced.

In some cases, it didn't work; see the sad story of ฟ, which was introduced after พ shifted [b] to [pʰ], with the obvious aim to have some letter to write [b], but then ฟ itself underwent another shift to [f].

This table also shows how consonants obtained its consonant class (which governs tones):

Richard Wordingham says in his article:

The second problem is the 'great consonant shift' whereby old voicing contrasts were lost in much of East Asia, covering most Tai, Mon-Khmer and Chinese dialects. (The change is not complete - some areas have escaped the change.)

Is there any explanation for why the consonant ท was not simply given its original value?

[…] or perhaps some practice of pronouncing Sanskrit words transliterated using that consonant with /th/, while home-grown words used /d/?

The problem with the traditional symbols is that they are pronounced quite differently in Thai. พุทฺธ is /buddʰa/ in the ancient pronunciation, but พุทธ is /pʰut-tʰa/ in Thai pronunciation. (Thai doesn't use PHINTHU.) An analogy is that 'Caesar' is pronounced /siːzə/ in British English, but is approximated as /kaɪsar/ in a Latin class in England.

Not the answer you're looking for? Browse other questions tagged alphabets thai or ask your own question.

5
Do any languages use distinct graphemes for vowels with different tones?
3
What was the original pronounciation of the Thai consonant symbols?
1
Was the Thai letter ด really derived from ต?

4
Why is the Lao word for tea "ຊາ" (saa) and not "ຈາ" (chaa)?
5
What's the origin of the Lao (ຈິງໂຈ້) and Thai (จิงโจ้) words for "kangaroo"?
2
Modern Thai writing system and modern Khmer writing system and the sharing of Non-Sanskrit symbols