All non-head material must be phrasal. — Why's this principle nice idea from a mathematical point of view?

Pls see red underline. I never took math after high school! I don't know calculus. What author mean by "nice idea from a mathematical point of view"? This is linguistics not math book! 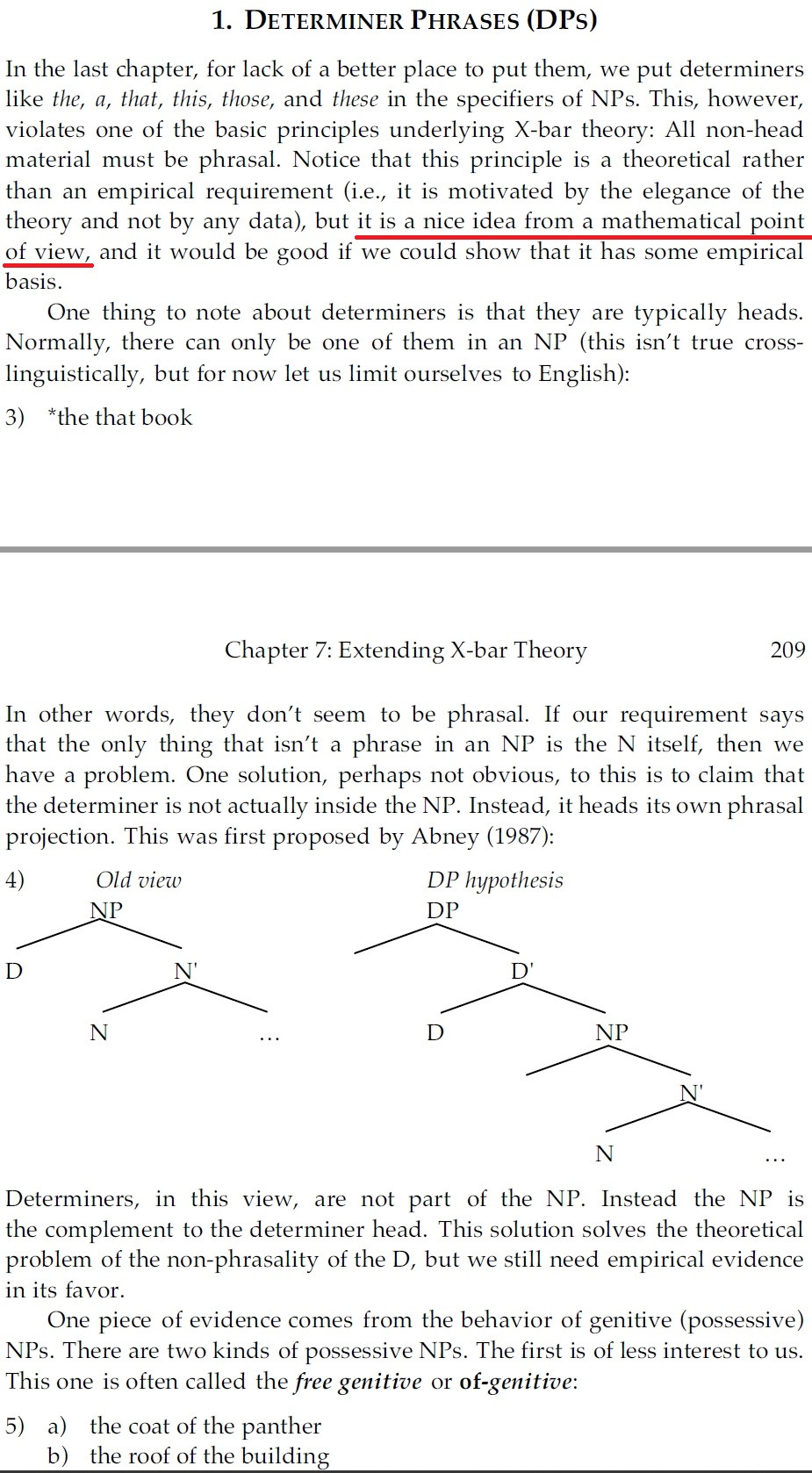 He's using "mathematical" loosely in this case. What he probably means is that it's more parsimonious/simple to only allow one head per phrase, which is in line with principles of Economy for linguistic theory. It all basically comes down to Occam's Razor: all things being equal, choose the simplest solution (or however you want to instantiate it). Since 1 head per phrase is simpler than 2 heads, it's "mathematically" nice.

This seems to be an appeal to generative power, in a loose sense. Throughout the history of generative grammar, there has been a concern with / interest in the class of "languages" that can be generated using a given theory. The underlying premise is that the best theory is one that allows the description of all attested languages, and nothing else (often justified in terms of Popperian falsifiability and the quasi-Popperian claim that a theory should not predict the existence of a thing not known to exist).

There are a few problems with this line of reasoning, investigation of which would take us too far afield. Briefly, though, (1) the "smallest set of languages" premise is quite questionable as a logical principle, (2) it remains to be proven that there is any actual difference in the set of languages that the two theories allow (the proposed theory probably can describe any imaginable language, it just does it a different way). A competing meta-principle is that the best theory is the one that posits the fewest theoretical entities (classical Occam's Razor), in which case adding a stipulation "must be phrasal" complicates the theory, with no concomittant benefit.

Not the answer you're looking for? Browse other questions tagged syntax phrase-structure carnie or ask your own question.

0
Does Syntactic Category determines Position in the sentence and the Position in the sentence determines Category?
1
Why cannot the Intermediate Structure be again XP, instead of X'?
0
Why cannot the verb 'consider' theta-mark 'Frederick' as the Theme?
3
If the that-trace effect is not learnable and thus must be biologically built in, how can speakers of French or Irish violate it?
1
If our requirement says that the only thing that isn’t a phrase in an NP is the N itself, why a problem?
1
Why only 1 complement is possible?