In our coursebook, introducing phonology by David Odden, one of the exercise questions asks us to decide if the obstruents of Thai are phonemes or allophones. My teacher says they are allophones but it is hard to predict what their underlying form is.

He gives the following rule to explain the distribution:

[-sonorant] becomes [-voiced] in the environment of (word-final position).

I am confused, how could they be allophones if there is a minimal pair(rap and rak)?

The picture below is the snap of the question: 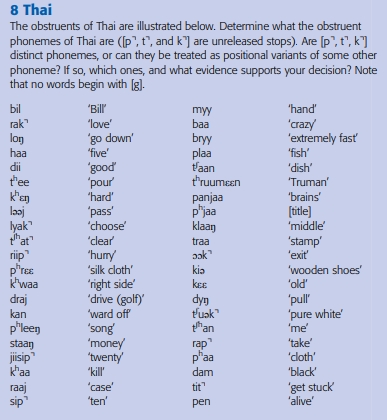 Are they actually allophones? or are they phonemes? The rule the teacher gives doesn't add up but I couldn't make up another one to convince him.

You've almost got it!

So the question now is—what might those three separate "something else"s be? Is there something generally similar to [p̚] that never appears in the same environment where [p̚] does? What is that something?

To restate the question, is it possible to derive every instance of [p̚, t̚, k̚] from some other consonant by applying a rule (what is that rule), and if so, what consonants underlie phonetic [p̚, t̚, k̚]. Pairs like [rap̚, rak̚] only show that [p̚] is not an allophone of [k̚], or vice versa. You have to look at all of the other possible things that [p̚] can come from (likewise [k̚, t̚]), if [p̚, t̚, k̚] are always derived from something else by applying a rule.