He said so little.

includes the NP so little, which doesn't include any noun.

This is of course assuming that you don't follow the DP hypothesis, under which it'd be easy to draw the DP so little.

There are a number of possibilities for the X-bar analysis of the phrase so little. A central choice one has to make concerns viewing little as an adjective or as a derived noun, that is, as a noun derived from an adjective. My favored analysis would be to view it as the latter. Given this decision, the next decision one has to make concerns the status of so: should it be viewed as an adjunct or as a specifier? Viewing it as an adjunct might result in the following X-bar analysis: 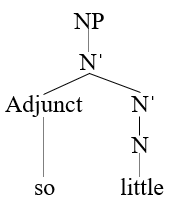 Viewing it as a specifier instead might motivate the next analysis: 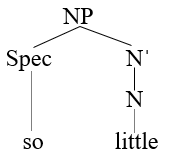 Concerning the first major decision mentioned above, the analysis would look much different if one chooses to view little as a normal adjective. In such a case, one would probably want to assume noun ellipsis, that is, that the noun has been elided. Such an approach might produce the following analysis, where a special symbol is used to indicate an elided noun: 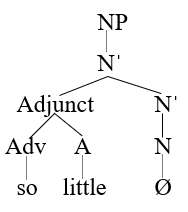 For me, the difficulty with this analysis is that it is not clear what the noun is that one would understand to have been elided.

The question states that the analysis would be straightforward if the DP-analysis of nominal groups were assumed instead of the NP-analysis. I do not see why that should be the case. The DP-analysis adds an additional category to it all, opening the door to a more layered analyses, with additional projections. That means even more decisions become necessary.

Finally, let me express my personal view about X-bar analyses. I think they are not well motivated linguistically. They are in general overly complex and thus subject to great variation, even among experts. In this regard, consider the simplicity of a dependency grammar (DG) analysis of the sentence: 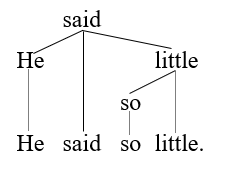 DG assumes a strict one-to-one correspondence of atomic units of syntax (i.e. words) to nodes in the syntax tree. This principle limits the potential analyses greatly. Dependency grammarians could hardly disagree about the analysis of a simple phrase such as so little.

Not the answer you're looking for? Browse other questions tagged syntax-trees x-bar-theory dependency-grammar determiners or ask your own question.

2
Syntactic representation of Across-the-board Extraction
2
How to apply x-bar structure to split verb phrases?
3
Is there a grammar of syntax that takes into account inherent syntactic ambiguity in natural languages?
4
Is “of the kitten” in “the paw of the kitten” a complement to the NP or an adjunct to the DP?