What is wrong with this way of looking at conjunctions?

What is wrong with the way of looking at conjunctions that I have tried to illustrate in the diagram below, in which a girl is simultaneously the object of saw and greeted, and the function of and is to convey the parallel relationship of Frank saw and Bill greeted that makes this possible?

Is this the same as the "large conjunct approach"?

Related question (actually it's more like a related answer, by Tim Osborne). The answer seems to be based on the idea that this structure would have to expand out to Frank saw a girl and Bill greeted a girl, which is a way of saying that the parallel relationship in which the object is shared is just not possible - but why not? 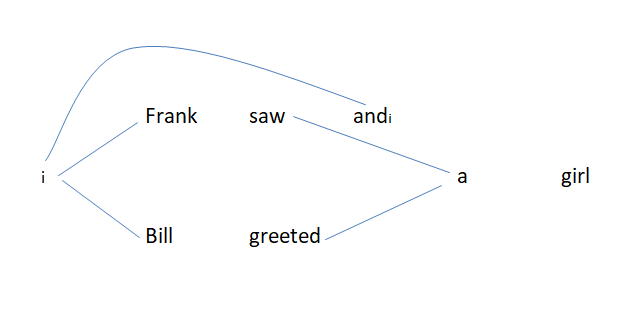 The pointy brackets { } indicate material that has been elided or deleted and is therefore not actually present on the surface. It should be apparent why such an analysis can be called a 'large conjunct' approach. Exactly what the underlying mechanism is called that elides or deletes missing material varies. Some might call it Conjunction Reduction or Right Node Raising or...

The problem with the large conjunct approach is that it suggests a meaning should be present that is often not available. Consider the contrast in meaning across the next two sentences:

The analysis indicated in (3) assumes large conjuncts, that is, the conjuncts are complete clauses underlyingly and an ellipsis or deletion mechanism reduces the first clause down to its surface appearance. In contrast, the analysis indicated in (2) assumes small conjuncts, which means no appeal to ellipsis or deletion is made. It should be apparent that only the small conjunct approach captures the intended meaning, which is such that there is 1000 dollars altogether, not 2000 dollars.

Given that the small conjunct approach comes out ahead in this area, it is nevertheless challenged in major ways. Above all, it has to account for the nature of the non-constituent strings that can and cannot be coordinated.

Finally, note that most phrase structure grammars in general are challenged in major ways by such data, since the implication is that the phrase/constituent is not the crucial unit of analysis that one needs to establish a tractable approach to coordination.

I think every linguist should know about Gerald Gazdar's and Categorial Grammar's solution to this problem, which is also used in Montague Grammar. It adopts a proposal of Ajdukiewicz (which see) to admit syntactic categories which are missing a constituent. A notation for this is to use a slash to show the missing category.

5
What is the difference between AND and WITH in general?
2
What is the term for the formation of word groups with single meaning/function (e.g. "in relation to which") in lingustics
5
Unusual sentence grouping with conjunctions
5
What languages reinforce imperatives with conjunctions?