What is the distribution of pronominal “one”?

(Based on the comments this question has received, more is needed to avoid confusion. The original question remains as stated below the line below. What is added here now is a more complete rendition that can avoid confusion.)

There are two versions of the word one in English, the cardinal number one and the pronominal count noun one. My question concerns the distribution of the latter. Why is the appearance of the pronominal count noun one immediately after certain determiners (i.e. weak determiners: a, my, your, his, her, our, their, etc.) marginal to bad for many speakers. Some examples are next:

(2) Your kittens are cute, *but their ones are cuter. vs. but theirs are cuter.

(3) Our pastries are good, *but your ones are better vs. but yours are better.

The plural ones is used in these examples to avoid confusion with cardinal one, for plural ones is necessarily the pronominal count noun; the cardinal number one is always singular (of course).

The fascinating aspect of this phenomenon is that the examples just produced become fully acceptable if an adjective appears between the determiner and ones:

(2') Your gray kittens are cute, but their black ones are cuter.

(3') Our European pastries are good, but your Asian ones are better.

So my question concerns this mysterious state of affairs. What explains the inability of the pronominal count noun one(s) to appear immediately after a weak determiner?

The following data set illustrates a mysterious aspect of the distribution of the indefinite pronominal count noun one in English:

Why are the examples in (1) bad, whereas the similar examples in (2-4) are fine? What literature addresses this phenomenon directly?

I will now attempt to answer my own question. I believe the distribution of strong vs. weak forms in Germanic is the core explanation for the curious acceptability contrast produced in the question. Modern German provides a clue in this regard. Adjectives following certain determiners in German, which can be called strong determiners, take endings that are distinct from adjectives that follow certain other determiners, which can be called weak determiners. It can be assumed that this distinction between strong and weak determiners (and strong and weak endings) exists across Germanic languages more generally. What we can observe, then, is that the pronominal count noun one(s) in English is licensed by a preceding strong determiner or by what would be a preceding strong form in Germanic. If no such strong determiner or strong form appears, the pronominal count noun one cannot appear -- but cardinal one CAN, of course.

The next data set from German illustrates the core observation: 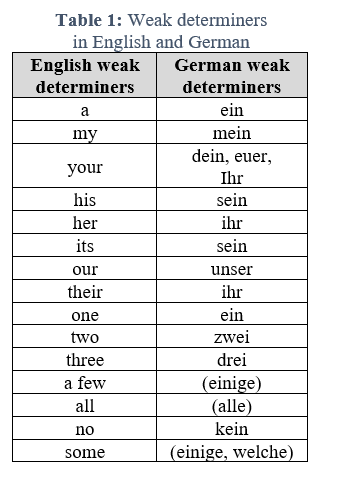 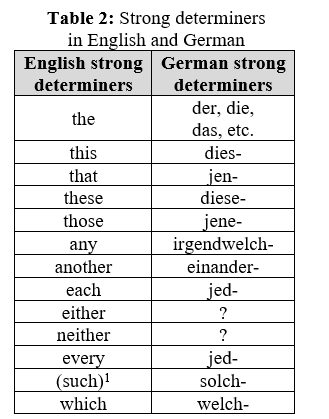 Switching now to the fact that pronominal one(s) can appear immediately after an adjective following a weak determiner (e.g. *my ones vs. my big ones), the intervening adjective would have a strong ending in German (e.g. ein klein-es Haus). Thus, the relevant generalization is that the pronominal count noun one(s) in English must be licensed by what would be a preceding strong form in Germanic, be this strong form a strong determiner or a strong inflectional suffix on an adjective.

The plausibility of this explanation is of course reliant on demonstrating that the relevant pattern existed in earlier forms of English. Certainly we know that Old English had the morphological richness associated with modern German. My coauthor is currently investigating the extent to which the observed pattern did or did not exist in Old and Middle English.

If you're interested in describing speakers' knowledge of these contrasts, then you should take a look at Richard Kayne's (2017) paper 'English One and Ones as Complex Determiners.'

He notes that adjectives need to have some sort of informational focus in order to license 'one.' For instance he gives:

Also, what determines whether a determiner is 'strong' or 'weak' in English for you? A number of determiners normally considered 'strong' like 'most' don't allow bare 'one'/'ones':

Not the answer you're looking for? Browse other questions tagged syntax english pronouns or ask your own question.

9
Can the word “said” be a determiner in written English?
3
Subject/Complement Agreement. How to describe problem with “The thing is the objects.”
7
How does the reaction against gender-specific pronouns relate to a languages' use of gender?
2
Which languages allow right-branching nominal pre-modifiers?
1
Сoncept of an attribute usesd by Russian grammarians
5
Voiced “th” in “thank you”?
4
“He kept a black book in his desk.” Is “in his desk” an adjunct or a complement?
1
Why only 1 complement is possible?