Why does Russian not vary from region to region?

We know that English varies from one country to another. Even within US, there are different accents (Baltimore, Texas, Kentucky, New York, etc).

But why Russian does not vary despite the large territory of Russia?

dialects slavic-languages russian
Share
Improve this question
edited May 10, 2021 at 17:50

First of all, it varies to some extent. People from Ural region, people from Rostov-on-Don, people from Vyatka region have quite recognisable pronunciation norms. The same with vocabulary, there's some words that are used only in a specific region, like "чкаться" in Bryansk.

However if we'll come up with some contrive metrics of language homogeneity Russian language is indeed quite unique. The state of things is nowhere close to what we can find in Norway or Germany of even USA.

The answer to the question "why" is actually quite complex a lot of things contributed to this, let's try to review them. Keep in mind though that this question in my opinion is too complex to be covered in a single answer here.

It all boils down how isolated communities are, that's why quite often we observe diverse variety of dialects in mountainous areas. In a relatively small Norway or in a tiny Armenia there are lot more dialects, some of them strikingly differ from each other.

Another famous example are German dialects which came into fruition (apart from other factors) because German lands constituted dozens and dozens of different political structures. Here's the a famous map of how it looked like in the middle of the 17-th century: 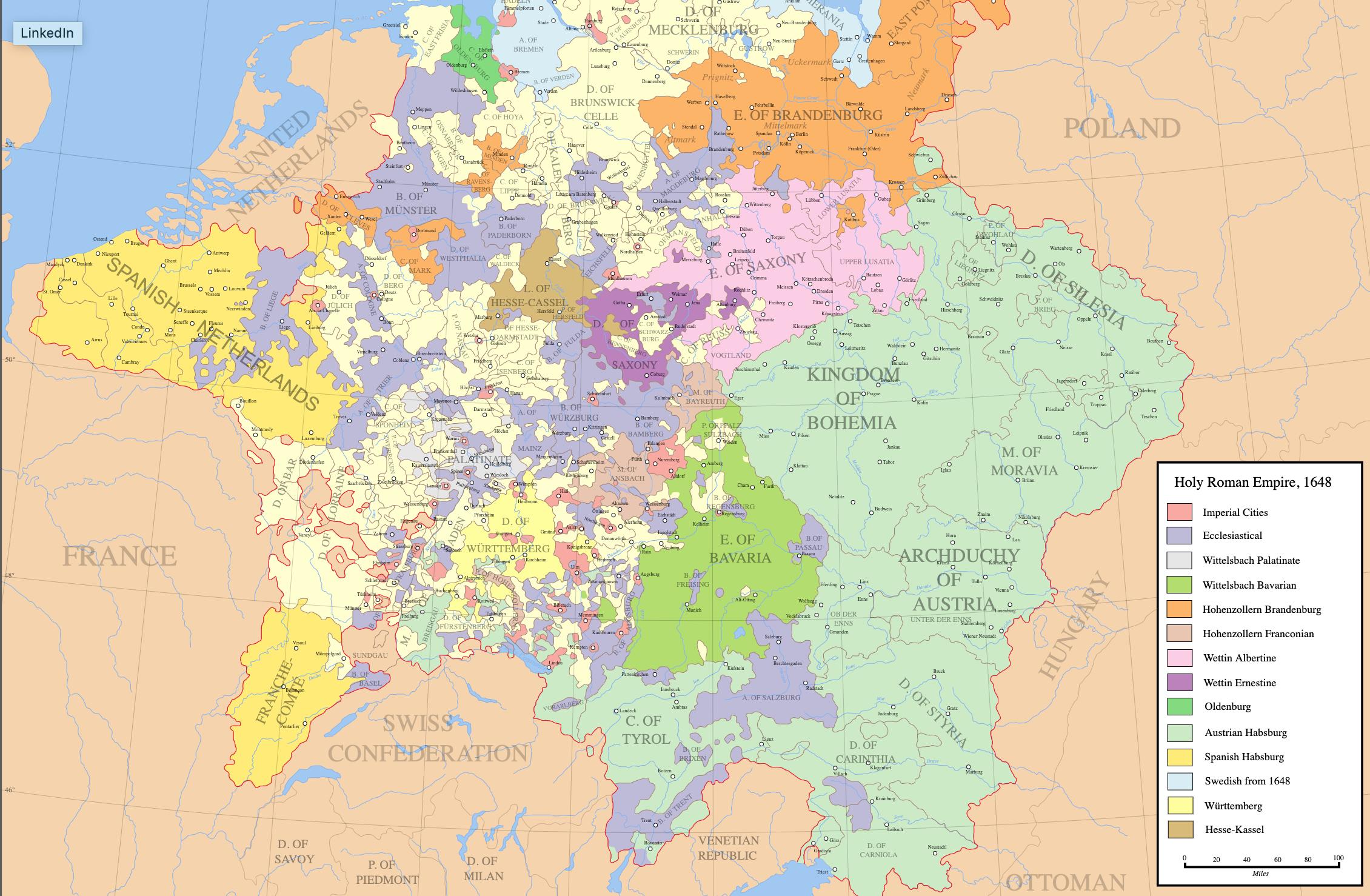 Russian Empire was not a thing up to that moment but what was already a huge part of ideology of it political predcessor, Tsardom of Muscovy is extreme centralisation. And here we've approached the second point.

I can recommend, for instance, this awesome book, Russia's Steppe Frontier by Michael Khadarkovsky. In this book some historical explanations of why that happened are given.

In the context of your question it's important to understand that cultural, political and even economic life alway've been concentrated in the major cities and the rest of the country was way less populated; Russia constantly and consistently struggled with any forms of political diversity.

This politic of centralisation was surprisingly something that was continued by the opponents and destroyers of Russian Empire, bolsheviks. So, next reason would be.

Prior to revolution the dialectal diversity of Russian language was way bigger. I repeat that it's still something we can talk about even now but still, the situation is incomparable to what we had.

Revolution was, well, Revolution, it changed literally everything - among other things it changes demographics - millions of people moved from one location to another, kazaks (and to some extent pomors) two major Russian sub-ethnic groups de-facto ceased to exist as social phenomena.

Apart from revolution, industrialisation happened, the very same process that contributed to the dawn of many english dialects actually - villages in Russia had been dying out, urban cities quickly grew. In this social melting pots dialects just can not win the battle against more normative version.

It's very difficult, however, to say how much exactly revolution contributed the fading of dialectal diversity because apart from revolution

In my opinion to what extent public broadcasting contributed to the dialects diversity reduction is the topic that still awaits it thorough explorer. However we definitely can say that this influence is at least noticeable.

The answer by @shabunc is very well, but I would also add that probably centralized school education in Soviet times also played a major role. The textbooks, the way of teaching, etc. was more-or-less standard all over Russia. I don't know how it was eg. in US, but I suppose that different states should have had much bigger differences in schooling.

Super interesting question, and one that I have also discussed with many Russian friends over the years.

I'm not sure this is a good answer to "why" ... but hopefully fits the discussion.

There is definitely a range of Russian accents and pronunciations. But it's nothing compared to languages like English or Spanish.

While you might be able to catch someone from Rostov, or perhaps Moscow. Anyone who tells you there is a meaningful identifiable difference between Irkutsk, Novosibirsk and Vladivostok is exaggerating. It's all pretty generic, clean Russian. And this is the general case of continental Russia.

One thing is that Russia has certainly had an idea that you need to правильно говорить по-русски ... and this includes accent. I can even remember television advertisements on govt channels in the late 90's about pronouncing позвонить correctly.

And a friend of mine from St Petersburg found even the use of some words (not swearwords) to be annoying. She was opposed to the existence and use of the the common ихный which is grammatically-incorrect version of их that was starting to fall in to common use at the time.

There was very much a right and a wrong way to speak as far as accent and pronunciation was concerned.

The Soviet Union was a multi-cultural nation with over 150 (very different) languages being spoken - many completely unrelated to the slavic branch. And the level of Russian across the USSR was generally very high in terms of ability to speak, understand, read and write. However, some Soviet republics were better than others. There were plenty of jokes about the way Estonians or Georgians spoke Russian with a very distinct accent.

But saying that, I lived in Lithuania in the late 1990s for awhile. This was after independence but Russian was still very widely spoken even among the ethnic Lithuanians. An average 45 year old Lithuanian spoke near-perfect Russian in terms of grammar, vocabulary and general fluency. But they definitely had a discernible softer accent (Lithuanian is completely different to Russian). And I remember hearing from a Russian friend his thoughts when I commented that many of the Lithuanians spoke such good Russian, he looked at me and said "yeah, but with such a terrible accent."

Strange question -- there was (and were) a lot of Russian dialect differences.

But, in XX century, the language became more or less unified, with help of radio, TV, and (in last decades) Internet.

BTW, some word are still different even between Moscow and SPB (pavement == "тротуар"/"поребрик" and so on.)

It's does. Especially for the past. There was strongly specific accents. And there are still. Maybe something new differences and nuances, but they are still. And there is the interesting thing, that in the former ex-Union national republics there is often more literate speech, because of departures, exiles and war-period evacuation.

Not the answer you're looking for? Browse other questions tagged dialects slavic-languages russian or ask your own question.

10
Distinguishing dialects objectively: lexical sets in non-English settings
13
Is it possible for a non-native version of a language to be classed as a dialect?
3
Getting familiar with accents
0
How can a Language or a Dialect be incorrect or inferior than some other one?
14
Do dialects without the meet-meat merger neutralize the distinction in some contexts?
5
What phonological process changes е to ё in Russian?
10
Any reasons for unexplained centumization in Balto-Slavic?
5
Is increased loudness a necessary characteristic of the stress in Russian?